South African musician Johnny Clegg, who formed one of the first rock bands with black and white musicians who performed together when apartheid was still the law, has died from pancreatic cancer. He was 66.

The Grammy-nominated musician, sometimes called the "White Zulu", died at his home in Johannesburg on Tuesday, his manager, Roddy Quin, said in a statement. 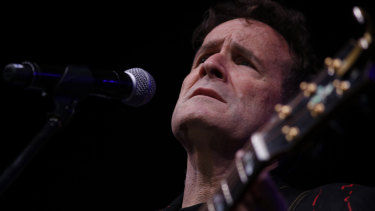 “Whie Zulu” Johnny Clegg performs in Johannesburg during his farewell concert in 2017. Credit:AP

Clegg was part of a community that brought Afro pop music to a global audience in the 1980s, along with musicians such as Paul Simon and Peter Gabriel.

South Africa's government said in a statement, "His music had the ability to unite people across the races … Clegg has made an indelible mark in the music industry and the hearts of the people."

His first band was called Juluka (the Zulu word for "sweat"), which he and black musician Sipho Mchunu formed in the late 1970s; its successor was Savuka (meaning "awakening" or "we have arisen").

Clegg wedded Zulu rhythms and lyrics to Celtic folk and Western rock and pop music in a string of albums, the most successful of which helped him build a solid following in the US, where he toured in the '80s and '90s. 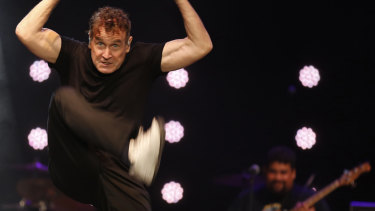 Johnny Clegg gives one of his high energy performances during a farewell concert in Johannesburg on November 11, 2017.Credit:AP

In 2017, during a respite between cancer treatments, he mounted a "Final Journey" tour through Europe and the US, when he felt healthy enough to take on extensive travels, uncertain about what the future held for him.

"I don't know what's going to happen – nobody knows," he told the Los Angeles Times in 2017. "But while I'm strong and able to do stuff, I wanted to do a nice, big 'Final Journey' tour."

In part it was a way of connecting with the fans he had established over nearly four decades as well as a form of therapy, despite the toll his high-kicking and stomping live show took on him.

"But when I get onstage, something switches all those messages off," he said.

One of Clegg's breakthrough moments came in 1997 when his song Dela was featured prominently in the live-action comedy film George of the Jungle.

One of his best-known songs was Asimbonanga, which, in Zulu, means "We've never seen him". It referred to South Africans during apartheid when images of the then-imprisoned Nelson Mandela were banned by the ruling white government.

Clegg was diagnosed with cancer in 2015, and the grueling treatment included two six-month sessions of chemotherapy and an operation.

In that interview, Clegg recalled how he performed Asimbonanga while on tour in Germany in 1997 and experienced a "huge shock" when Mandela, beaming and dancing, unexpectedly came out on stage behind him.

At the end of the song, Mandela and Clegg, holding hands, walked off stage.

"That was the pinnacle moment for me," Clegg recalled. "It was just a complete and amazing gift from the universe."

Clegg subsequently performed at four AIDS benefit concerts held in Mandela's honour and was part of the all-star line-up at a 90th birthday celebration for Mandela in London's Hyde Park in 2008.

Yet he shied away from embracing the moniker of political activist.

"For me," he told The Sunday Times in Britain in 1989, "a political activist is someone who has committed himself to a particular ideology. I don't belong to any political party. I stand for human rights."

Jonathan Paul Clegg was born on June 7, 1953, in Bacup, Lancashire, England, but moved as a child to Africa with his mother, whose parents were Jewish immigrants from Poland.

They moved first to Rhodesia (which became Zimbabwe), and then South Africa when Clegg was six. Like many white youths in the US and England who later became musicians, Clegg was captivated as a boy by the sounds he heard whenever he was in proximity to black communities. He was initially introduced to those communities by his mother, who was a cabaret and jazz singer, and his stepfather, a journalist.

Despite the nation's institutional segregation, Clegg often sneaked into music and dance events, falling foul of the laws and occasionally landing in jail, the first time when he was 15.

"To me, they were fun things," he told The Times in 1993, "things I wanted to be a part of: dancing with Africans at a migrant workers' hostel, playing with them at night on the roofs where they live, and things I wasn't allowed, because of the apartheid laws, to do."

Those experiences not only later informed the music he created with Mchunu and other black musicians, but fed his companion career as a cultural anthropologist, which earned him teaching posts at the University of Witwatersrand and the University of Natal.

An eloquent and educated speaker, Clegg would often combine the two careers during his concerts, enlightening audiences as to the different traditions from which the choreography and musical elements he incorporated originated.

He formed Savuka in 1985 after Juluka disbanded when Mchunu decided to stop performing to focus on his family. His key foils in the new band became percussionist and dancer Dudu Zulu and singers Mandisa Dlanga, who remained with him through the end of his performing career, and Solly Letwaba.

The political and social revolution that saw Mandela transformed from political prisoner to South Africa's president was tumultuous. Even as there was much to celebrate, Clegg experienced ongoing tensions personally when Dudu Zulu was killed in 1992 while trying to mediate a dispute between feuding clans. Clegg disbanded Savuka shortly thereafter, later resuming touring and recording as a solo act.

"It's the pain of living," Clegg told The Times shortly after Zulu's death, as he was embarking on his latest US tour. "You get the beautiful moments, you get the painful moments."

Among the moments he delved into on his 1989 album, Cruel, Crazy Beautiful World, was the birth of his son Jesse, to whom he acknowledged his finite time on earth: "It's a cruel, crazy, beautiful world/One day when you wake up I will have to say goodbye/Goodbye/It's your world so live in it!"

Jesse Clegg in turn has become a pop star in South Africa, working to follow in his father's footsteps to expand his audience beyond his native land. He joined his father on his most recent European and US tours, performing as a member of his band and delivering opening sets featuring his own music.

Clegg took a philosophical view, strongly influenced by his associations with indigenous people, into his journey with cancer in the last few years, and continued to look to his role as an artist to help guide him.

"It's just a matter of human beings making meaning," he said in 2017. "That's what makes great artists, what makes great painters, great choreographers – that in the time that you are given, you make connections, and those connections are manufactured. They're not in the real world; they are in your imagination. And if you have a strong imagination, you can get over anything."

What turned out to be his final public performance came on the island of Mauritius, off South Africa, on October 13.

Clegg is survived by his wife of 31 years, Jenny, and their sons Jesse and Jaron.