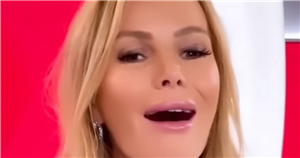 Britain's Got Talent judge Amanda Holden left fans in hysterics after she belched "a best of a burp" on her Instagram.

The 51-year-old was happy to take part in the latest TikTok challenge where a willing participant tries to drink a can of fizzing drink without burping.

Sharing the video clip on her social media platform, Amanda started off rather tame as she opened the fizzy drink can.

Captivating viewers while wearing a striking blue dress, she said: "My first attempt of drinking a whole can of Sprite without burping. I don't even drink sprite.

The TV personality looked elegant as she continued to sip the drink while informing fans that it was all "going well".

But as she appeared to grow in confidence, Amanda let out a humongous belch, which left her followers rather taken aback.

One person penned: "Omg I nearly wet myself, followed by a string of crying emojis."

Another said: "I STILL FIND YOU ATTRACTIVE AFTER THIS."

A third shared: "Hahahahahhahahahahhaha. That was so undignified it was awesome!!! Well in @noholdenback"

The TV judge who is currently offering her critique on ITV's Britain Got Talent was left terrified after an audition seemed to go wrong and a crew member was engulfed in flames while on stage.

BGT auditionee Steve Rawlings attempted a fire juggling act while blindfolded but accidentally set fire to his covered head and, when a crew member rushed over to help him on stage, he was also caught in the blaze.

The member of staff quickly dropped to the floor as the horrified judges looked on.

But with all the commotion taking place, viewers at home were left wondering whether it was real or part of Steve's act.

Taking to Twitter, one person wrote: "Britain’s Got Talent just casually including a crew member rolling around on fire in a montage like its the most normal thing in the world."

While another said: "Wtf someone from the crew on BGT just got lit on fire,’ while one viewer shared: "A crew person got lit on fire and they still aired it -what?"