Early afternoon bleeds into late. The sweat from the day’s work is sticky on my skin. I glance down at the river. I haven’t been game enough yet, but this could be the moment. “Swim?” I say.

My friend Phillip stops work and raises his eyebrows. It’s a mild response compared to mine when my friend Elizabeth first suggested a dip. “In the Yarra? You’ve got to be joking,” was what I said. 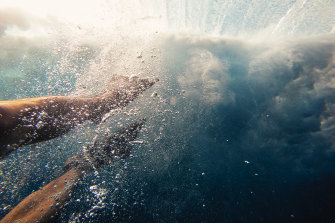 “I surface with a yelp of shock and exhilaration and blow the water droplets from my lips before they dribble inside. A kayaker glides past. ‘You’re game!’ he says. ‘Yep,’ I puff.”Credit:Stocksy

Industry, including a now-closed paper mill just upstream, contributed significant pollutants to the river in the way of chemicals, grease, oil and heavy metals. For the last few decades, though, industry has relocated away from the river and now the major pollutants are stormwater run-off, sewage – and whatever remains of the previous pollution. Was it clean enough for full-body immersion? I was dubious.

Elizabeth directed me to the Yarra Watch website, which publishes weekly water-quality observations specifically for recreational swimming. Testing is performed at four sites along the river during the summer months, including at an “urban” testing site a few hundred metres upstream from us.

Apart from the few days after rain, the site seems to give a consistent “fair” rating. If the government is willing to risk a thumbs up for a suburban swim, then it can’t be too bad.

Phillip doesn’t need much convincing. “Let’s do it!” he answers with a huge grin. Still, I’m a little squeamish as I strip to my underwear on the jetty and watch a plastic water bottle and muddy tennis ball float past. I try to blank images of dog poo from my mind and inch my toes closer to the edge.

Phillip slips into the water to check for snags. Bubbles rise to the surface as he dives below, emerging with a shake of his hairless head. He gives me a thumbs up. I peer below into the brown swirling mass, wondering where it’s come from and what it might have collected along the way. Can I really trust this water?

Not so many generations ago, you could drink from it. But city rivers have gained a reputation for basically being drainpipes of the suburbs. Am I really about to swim in the miles and miles of stormwater drains of the eastern and north-eastern suburbs?

“Come on!” Phillip calls from where he floats in the centre. The allure of a backyard swim wins out. With a squeal, I launch from the jetty and descend in a giant dive bomb. My legs begin to kick, and I pull my undies back up as I rise. I surface with a yelp of shock and exhilaration and blow the water droplets from my lips before they dribble inside.

Phillip is grinning like a pirate. A kayaker glides past. “You’re game!” he says. “Yep,” I puff as I catch my breath, feeling a mix of reckless and a little foolish. A duck appears and cruises past within arm’s length, looking undeterred by my presence.

The immediate warmth meets my skin with delight, and I shift a little closer to the flames. I am warmed from the inside out, not just by the fire, but by the day.

I swim around in a 360. Wow, the river from duck height is entirely different. It’s like I’m seeing it in panorama, the surface ripples now an embodied rising and falling of waves, the trees protectively paternal in their overhang. “See if I can find bottom,” Phillip calls before disappearing underwater. He reappears with a shrug. “Nah.” It’s as I thought, though I can’t see it, sensing a depth beneath my dog-paddling feet.

I gather some more courage and breaststroke upstream, every underwater face-full passing without incident, building my confidence. A Eurasian coot swims right up to me, like the duck did, without any timidity.

“Hello, cooty coot!” I call. I start laughing. I’m swimming in my backyard! In the city! We swim over to the other side and clamber up onto a fallen log. A grey shrike-thrush flies in, alights on the branch above, and calls loud and strong.

The first week here, I got a bit confused at the melodious and consistent bell-like chiming I could hear from the river until I realised it was shrikey calling in a dialect different to the one I was used to up north.

I copycat whistle to the one on the branch. Shrikey tips its head as if considering and then issues a reply. Much to Phillip’s amusement, our back-and-forth echo goes on for a few minutes before the bird tires of its language lesson and flies off.

Phillip is lanky and graceful as a stork as he strides along the log and up the bank towards the cherry ballart tree. Its trunk is so brown it’s almost black, and its long lettuce-green leaves stand out against the grey-green of the eucalypts. Ducking in under the low-hanging branches, Phillip emerges with a few sprigs of foliage, which he holds above his head as he swims back across the river. I follow in his wake.

Dripping wet, we squat around the new ring of rocks on our fire circle as I hold out a bunch of dead leaves while Phillip lights them from underneath. The immediate warmth meets my skin with delight, and I shift a little closer to the flames. I am warmed from the inside out, not just by the fire, but by the day.

This article appears in Sunday Life magazine within the Sun-Herald and the Sunday Age on sale June 6 To read more from Sunday Life, visit The Sydney Morning Herald and The Age.