Foreign Minister Penny Wong has apologised to the Jewish community for the way the federal government revealed its decision to no longer recognise West Jerusalem as Israel’s capital, saying the timing of the announcement was “deeply regrettable”.

The opposition urged Prime Minister Anthony Albanese to call his Israeli counterpart Yair Lapid to apologise for the way the decision was handled. 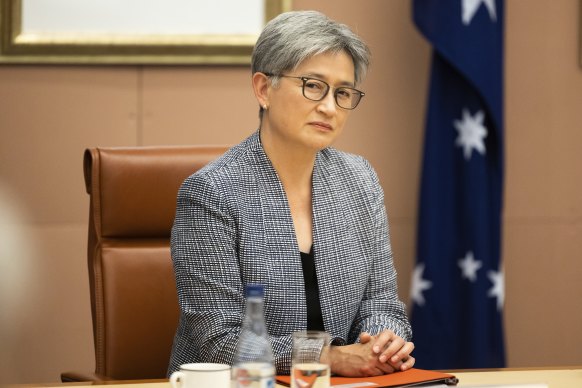 In an opinion article for The Australian Jewish News, Wong said she understood there were “few issues more central for many Jewish people than the status of Jerusalem”.

“It is more than a political issue,” she wrote. “It is definitional. It is about history, faith, identity.”

As Albanese did a day earlier, Wong defended the substance of the government’s decision but said it could have been handled better.

“I regret that the shift away from Australia’s longstanding position, and the shift back this week, have been distressing for communities that have a deep-rooted and keenly felt stake in the cessation of conflict, particularly the Australian Jewish community,” she said in the piece, published on Thursday.

“And the timing of this week’s announcement, falling as it did on Simchat Torah, was also deeply regrettable.”

The Simchat Torah holy holiday prevented Jewish groups from commenting on the government’s decision until sundown on the day it was announced.

Wong said the government agreed with the vast majority of nations that the status of Jerusalem should be “resolved as part of any peace negotiations between Israel and the Palestinian people”.

She said former prime minister Scott Morrison had changed Australia’s position in an attempt to win the 2018 byelection in Wentworth in Sydney’s east, which has a large Jewish community.

Albanese said on Wednesday: “Of course some things can always be done better, but the truth is we have been very clear about what our position was.”

In a piece for the same publication, opposition foreign affairs spokesman Simon Birmingham said the government’s decision was made through a “shambolic process, contemptuous of many stakeholders, and executed with shocking timing”.

“What should come next is a call from Prime Minister Albanese to Prime Minister Lapid apologising for the inconsiderate and amateur way in which this matter was handled,” he said.

Lapid condemned the decision as “hasty” on the day it was announced, saying that “we can only hope that the Australian government manages other matters more seriously and professionally”.

Opposition Leader Peter Dutton said the government had “lied” and “deceived” people by insisting its position on West Jerusalem had not changed only hours before announcing its decision.

“They’re saying one thing, one hour and the complete opposite the next hour,” he told 2GB radio.

Dutton said Lapid had delivered a more “brutal assessment” of the Albanese government than French President Emmanuel Macron did when the Morrison government cancelled a lucrative submarine contract with France.