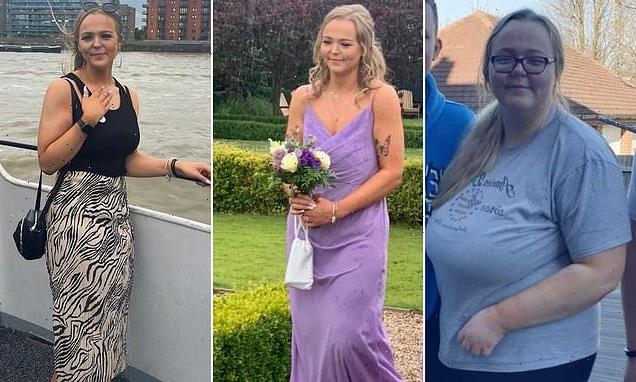 Woman, 22, who ate so much as a teenager that her parents put LOCKS on the kitchen cupboards reveals she shed 14st and dropped eight dress sizes after gastric band surgery

A woman who couldn’t fit on any rollercoaster rides because she weighed 27st has lost half her body weight following a gastric sleeve operation aged just 20.

Stephanie Smith, 22, from Ashford, Kent, overate so much in her teens that her parents put locks on the fridge.

The turning point finally came after a trip to Thorpe Park when her expanding waistline prevented her from going on many of the rides.

The retail worker forked out £9,000 on a gastric sleeve operation and now weighs just 13 stone, while her dress size has dropped from a size 28 to a 12.

Stephanie Smith, 22, of Ashford, Kent, used to eat so much she often felt sick. At her heaviest she weighed 24st but dropped down to 13st and a size 12 after gastric band surgery. Pictured: Stephanie before (left) and after the procedure (right) 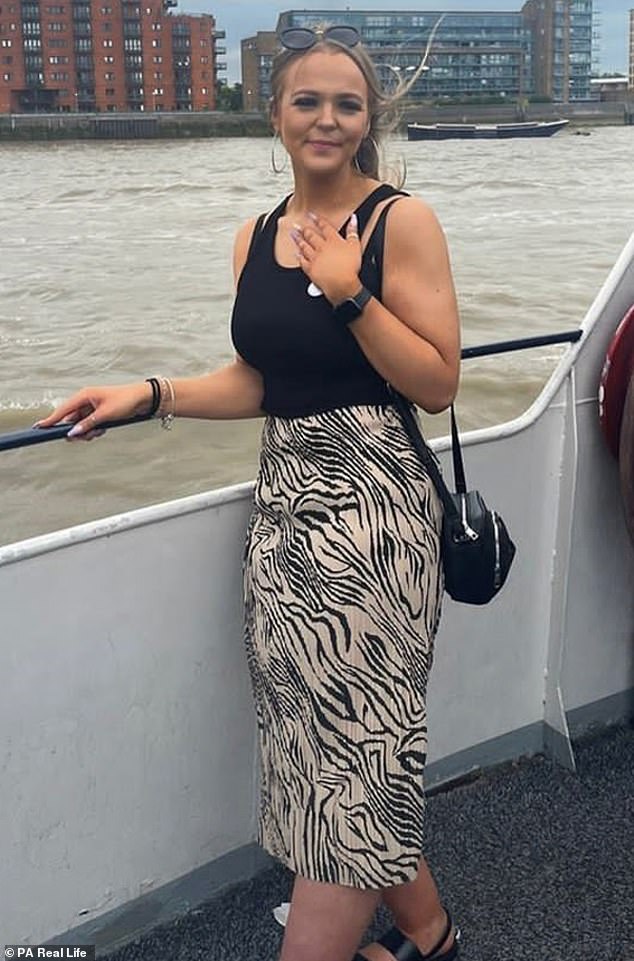 Feeling more confident and energised: Stephanie after her dramatic weight loss. The 22-year-old said having the procedure is the ‘best decision she has ever made’

Stephanie said: ‘At one point there were two people trying to push the safety bar down over me and it wouldn’t go. That’s when I decided enough was enough.’

Explaining why she weighed so much, she continued: ‘Food completely took over my life. I had absolutely no shame when it came to eating. No diets worked.

‘People think gastric surgery is cheating but it was anything but. Something drastic had to happen.’

Stephanie puts her weight gain down to family issues and a bereavement that she endured at the age of 12.

Before then, she said she was average-sized and not ‘a big child’. However, using food as a coping mechanism, Steph says she began overeating huge quantities.

She said: ‘I’d go to the bakery near school and have one cake. Then a couple of days later I’d be eating two cakes. Then a whole pack of biscuits.

‘I remember going in there and buying a whole Swiss roll and eating that. I had no limits. 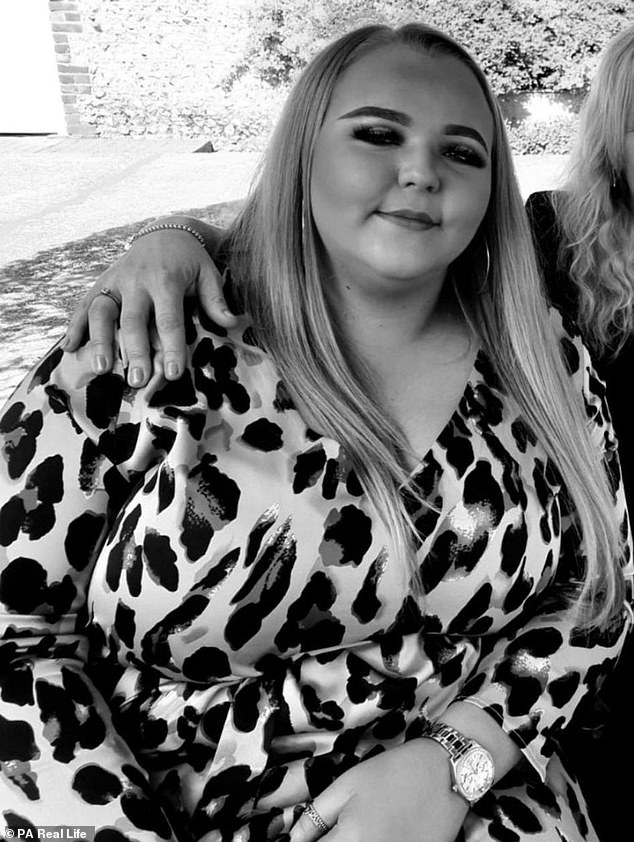 Steph says her overeating was down to emotional issues, including bereavement, and using contraception, which she says caused her appetite to increase. Pictured, Stephanie before her weight loss 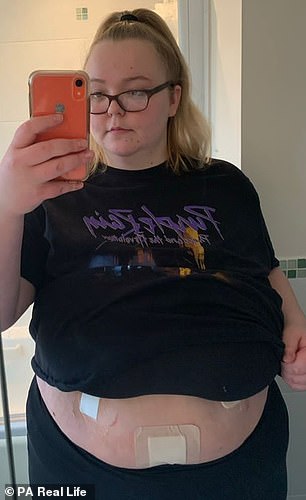 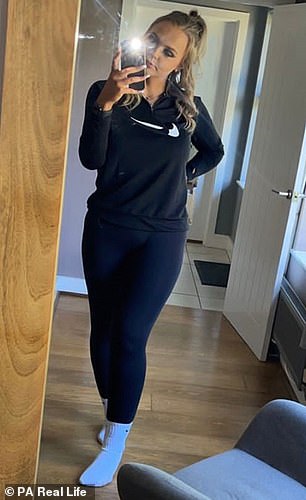 ‘Food was on my mind all day every day. I thought about what I’d have for lunch, what Mum would cook for dinner, what I’d sneak in between meals. It was constant and my life revolved around food.

‘I told myself I had to eat until I was really full. In reality, that meant eating until I felt sick.’

After leaving school and landing a job in a supermarket, Steph would start her days with a well-intentioned breakfast of toast, scrambled eggs and avocado.

But she said: ‘Then it all went downhill. Within half an hour I’d have a huge bar of Dairy Milk.

‘Then I’d be searching the cupboards for anything I could get my hands on. Packets of crisps, cake. Lunchtime would come and I’d have two sandwiches then I’d be in the freezer looking for more.

‘I remember one day eating frozen pudding straight from the freezer. I’d eat Mum’s healthy dinner then just go to my room and eat and eat.

‘It got so bad that when I was 15 or 16 my parents put a lock on the fridge and the kitchen cupboards.’ 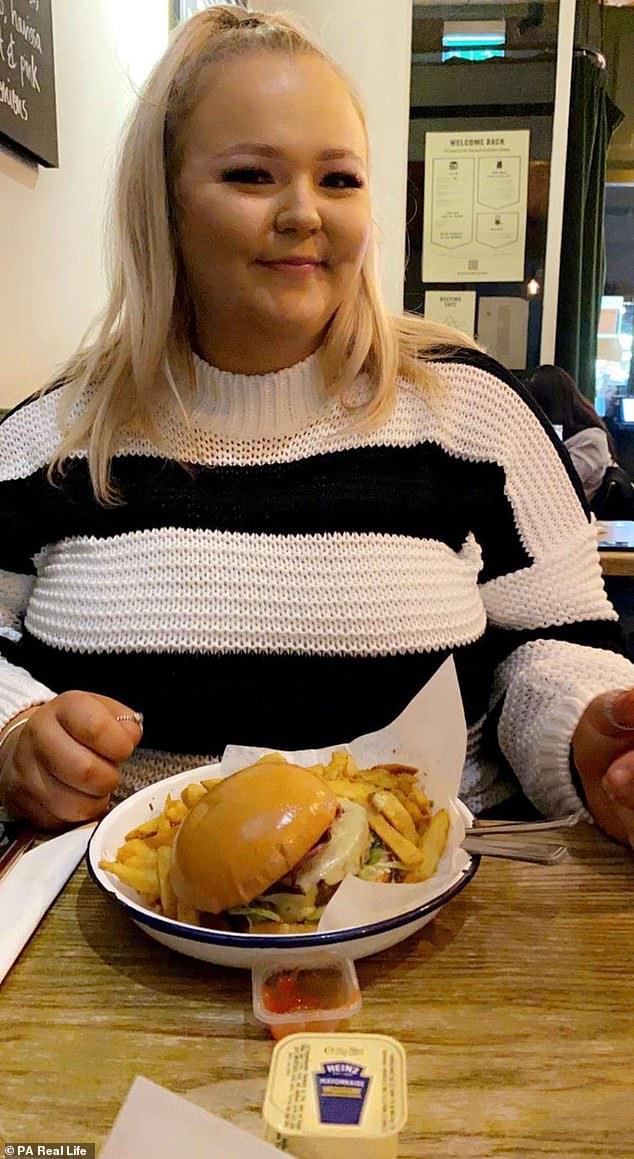 At age 15, Steph’s parents were forced to put a lock on the kitchen cupboards. Pictured, Steph before her weight loss surgery

But even that did not stop Stephanie’s appetite.

She began using contraception in her mid-teens and found her appetite increased when using the contraceptive implant.

Gaining a huge amount of weight throughout her teens, she soon found herself struggling physically.

She said: ‘Though I didn’t have any medical problems, it was almost as if doctors were confused as to why I didn’t have high blood pressure or any of those things.

‘I would go in the shower on a hot day, come out and be sweaty by the time I had dried myself. Then I’d have to get back in.

‘Simple things people take for granted were really difficult. Things like getting breathless going up the stairs or bending down to tie my shoes.’

Eventually Steph had a body mass index (BMI) of 56, compared to the NHS healthy range of 18.5 to 24.9, meaning she was classed as dangerously obese.

But it was the trip to Thorpe Park in summer 2020 that was her turning point.

Unable to fit on many of the rides, she said, ‘Something had to change.’

Steph’s family suggested to her that, as she had tried diets and always regained the weight, she consider bariatric surgery. 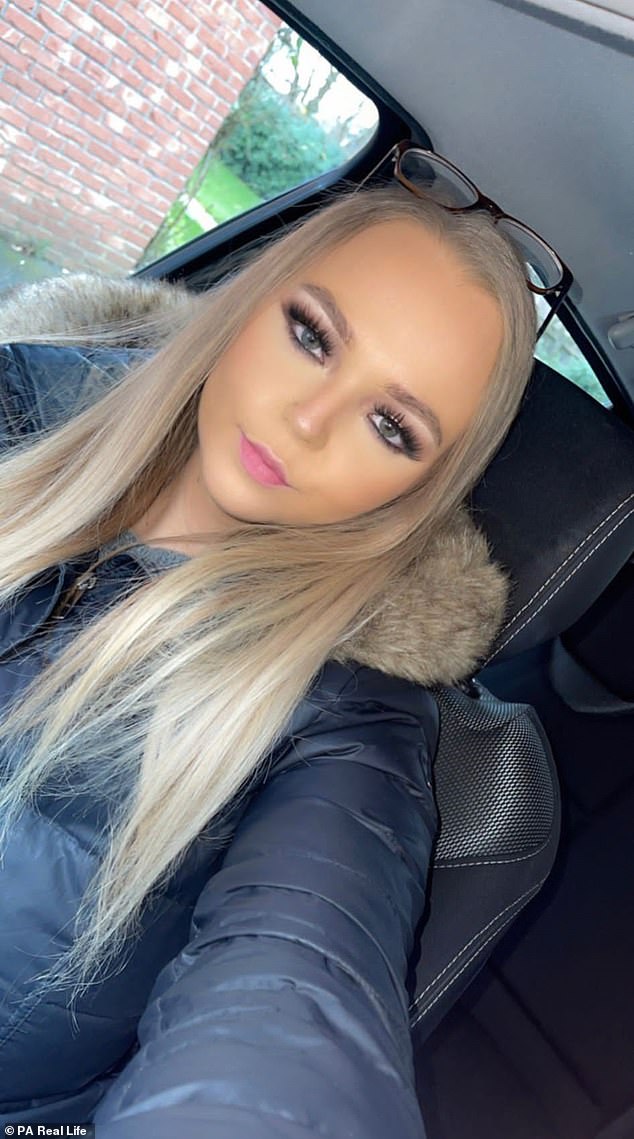 She had the surgery 18 months ago at Kent’s Benenden Hospital in December 2020, weighing 27st 2lb. She went on to lose around a stone a month.

Now a size 12, she describes the surgery as ‘the best decision of my life’.

She said: ‘Now a single ready meal can last me two or three days. I still can’t get my head around it.

‘I’ll have one piece of toast for breakfast and not finish it. All my meals are small and on side plates.’

The impact of her drastically reduced portions and the 25,000 steps Steph walks each night picking orders for a major supermarket have been drastic.

She said: ‘I have more energy, my confidence has improved and I put on clothes and feel great. I feel like everything has changed.’

She added: ‘Though I don’t have a partner currently, I have found that men are much more interested than they were.

‘In a way, it’s really sad. I’m the same now as I was then. I haven’t changed and am just as deserving of love.’