The photograph was faded, a little yellowed, but still clear enough to send shivers down my spine.

I squinted harder. Was it really showing the evidence of a secret my mother had kept for more than 60 years?

It was the Christmas after she died, aged 82, and I was going through her old pictures, some lying loose in a box, others in a little black album. Suddenly this one image of her caught my eye.

My mother was always very petite — under 5 ft and rarely weighing more than seven-and-a-half stone. But in this photo, taken in 1932 when she was 18 years old, she seemed rather plump, verging on fat. ‘Goodness,’ I thought. ‘She was much bigger then.’

Then another thought came. Was it possible she’d been pregnant? Surely not. She hadn’t met dad then . . . 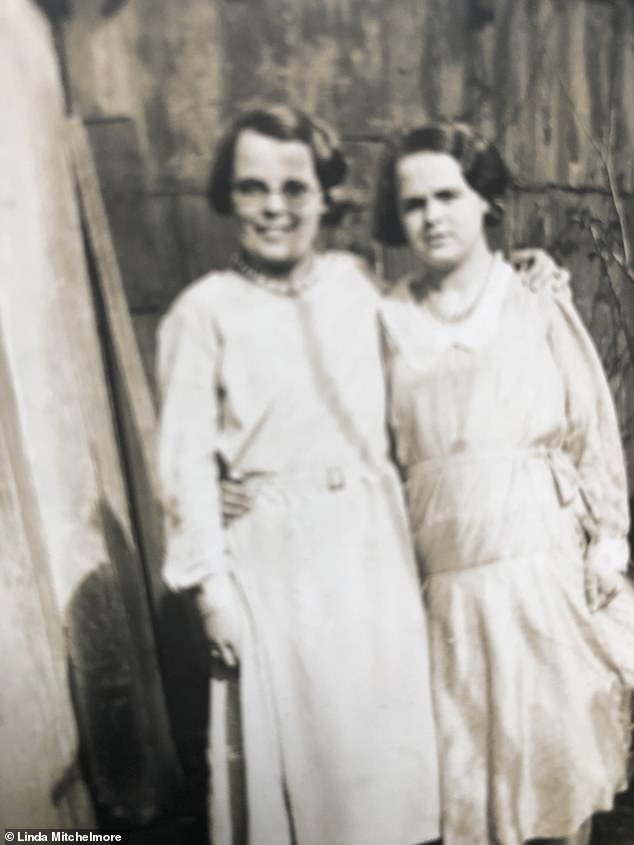 Mystery baby: Linda’s pregnant-looking mum (right) in 1932 with her sister. ‘The photograph was faded, a little yellowed, but still clear enough to send shivers down my spine. I squinted harder,’ Linda writes

My head spun as I tried to work out the dates. It must have been a good 15 years before I was born in 1947. I have two brothers. One died at two weeks, the year before my birth. The other is three years younger than me.

I felt a wave of shock. Had mother had a baby as an unmarried teenager, with all the stigma and shame that surrounded such a thing in those days? What had happened to the child? And why on earth hadn’t she told me?

True, she and I had never had a relationship where we shared every emotional up and down, but we lived near one another, visited regularly and I nursed her when she became ill. It saddened me that she’d not been able to confide in me. But what if the truth was so painful, she’d never been able to tell it?

I tentatively asked my brother what he thought, but he said he didn’t want to know; he felt it was nothing to do with him.

Then my friend Rosemary, a retired midwife, took a look at the photo and told me mum looked ‘pretty much full-term’ to her.

As an author, I knew this was a powerful story. So I set out on a quest to find out what had happened all those years ago. 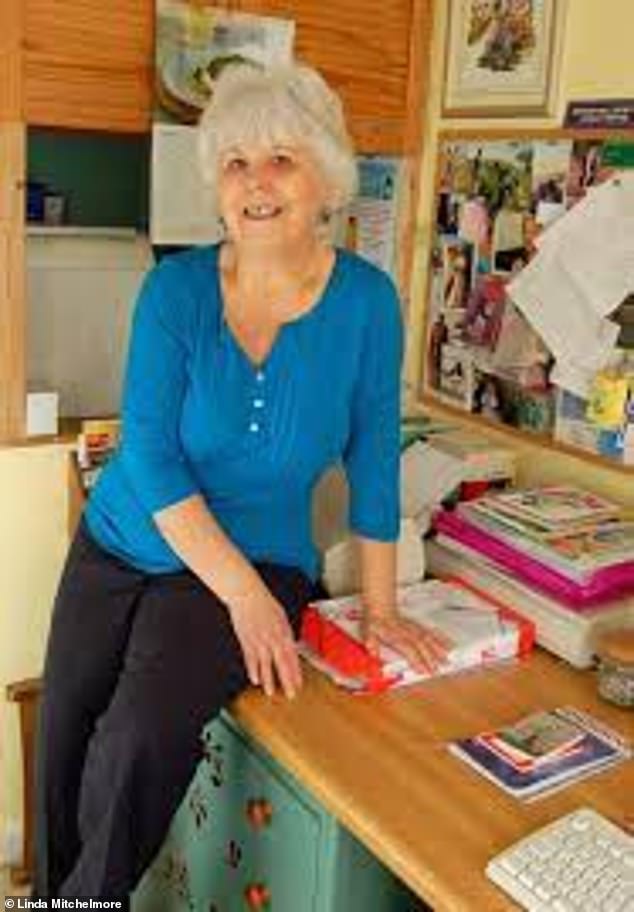 Pictured: Linda. She says: ‘An estimated half a million unmarried women and girls were made to give up their babies from the early to late 20th century, many of them crippled with grief and guilt as a result’

With another friend’s help, I searched birth records using my mother’s maiden name.

The birth date came up right away. The baby was a girl: first name June, middle name Heather, born in March 1932.

My mother’s address was given as Prisk, Maendy, near Cowbridge, and the place of birth was given as Blaengarw in Bridgend. I knew mum had been in service in Wales, because she’d spoken about her sister ‘finding her a position’ there. After more delving I found June’s birth certificate — with my mother’s name on it but not the father’s — and the word ‘Adopted’ written on the side of it.

My heart sank. An estimated half a million unmarried women and girls were made to give up their babies from the early to late 20th century, many of them crippled with grief and guilt as a result. The thought of my mother being one of them, and then keeping it secret, felt desperately, wretchedly sad.

I glimpsed the shame that still surrounded it when I visited my Aunt Frances, one of my mother’s sisters. I decided to come straight out with it. ‘Did my mother have a baby as a teenager?’ I asked. 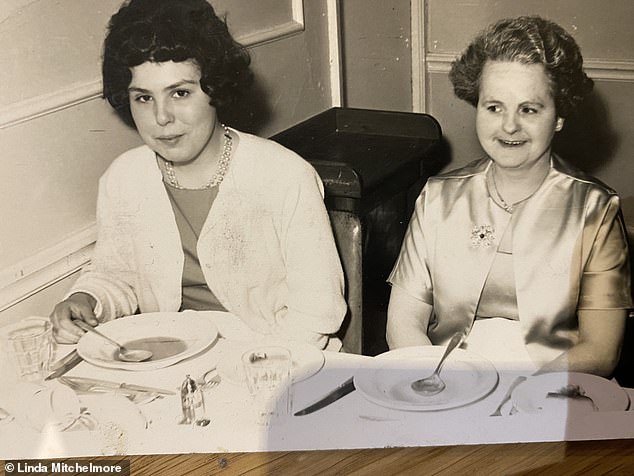 Pictured: Linda and her mother Bessie at Christmas dinner together. ‘Mum had always been very understanding of unmarried mothers, too; curiously so, for the time,’ Linda explains

My aunt went very quiet and then said: ‘No babies.’ That was it. She didn’t — wouldn’t — say any more. In fact, she said it in such a voice that I didn’t like to question her.

By now, however, other memories were starting to make sense. I wondered if it explained why my mother had never been a very emotional or tender parent. I know mum loved us, but she wasn’t one for putting her arms around us in comfort.

Had she been forced as a teenager to deny and quash maternal feeling to such an extent that it had damaged her for ever?

Mum had always been very understanding of unmarried mothers, too; curiously so, for the time. I remember her saying things such as, ‘they’re more to be pitied than blamed’ and ‘well, she’s not the first and she won’t be the last’.

I found myself obsessing over childhood memories.

My parents had met during the war, outside Woolworths in Paignton, Devon, and my childhood had been very happy in most respects. Suddenly I recalled one especially happy time that perhaps held the key to the whole mystery.

When I was about eight years old, two young women had come to stay with us in Paignton for a holiday. Matilda (Mattie), one of my mother’s cousins who lived in Wales; and a woman in her early 20s, whose name was June. Mattie and June took me to the beach and spoilt me rotten with ice cream and candy floss. 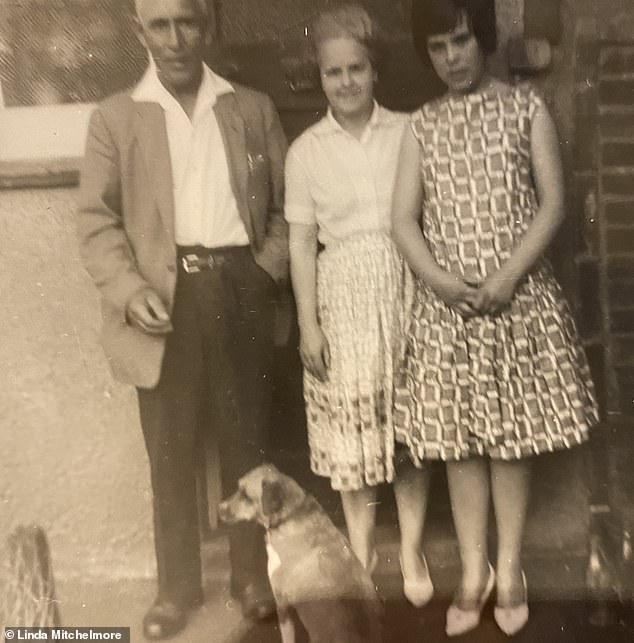 Linda aged 15 with her mother and father. She writes: ‘I have no idea if my father knew who June really was, but he was a very calm, laidback man and I can’t imagine him judging my mother’

I recalled sitting around the kitchen table with them and my mother being happy, too. Mum was very skilled with a needle and she made summer dresses for them. It was a lovely visit.

But neither young woman ever came again.

The more I remembered, the more I became convinced that June was the unborn baby in that picture of my pregnant mother. The age gap between us, 15 years, seemed about right. Had she been taken in by Mattie’s side of the family?

My mother had many relatives, and I asked around, but no one seemed to know. Most of the people who had been alive then were now dead. Or perhaps no one wanted to say anything because of the stigma Aunt Frances still clearly felt.

Another incident struck me as horribly telling. When I was in my mid-40s, I had to tell her that a close relative had been sexually assaulted. I was extremely upset. My mother gasped in total shock. She got up, and I thought she was coming to comfort me. But she didn’t. Instead, she left the room. 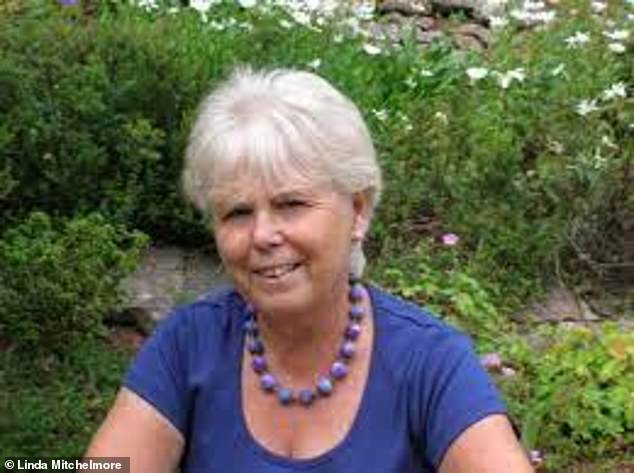 Linda (pictured) says: ‘The more I remembered, the more I became convinced that June was the unborn baby in that picture of my pregnant mother’

When she came back after 15 minutes, all she said was: ‘Stop that crying — it will make you ill. These things happen.’

I thought nothing of it at the time because my mother wasn’t a touchy-feely sort of person. But I wonder now if that was what had happened to her. I truly hope not.

I have no idea if my father knew who June really was, but he was a very calm, laidback man and I can’t imagine him judging my mother.

There was one more clue. After my father died in 1994, my mother would often ask my husband Roger if he could drive her over the moors in the autumn. ‘Heather is my favourite flower,’ she’d say.

The poignancy of that has often moved me to tears — that my mother would give such a sweet middle name to the daughter she’d be forced to give away.

It was hard having a mother who brushed off emotional things, especially when I was a teenager, and later as a mum going through post-natal depression. I never saw her cry. Now, I see her very differently. Maybe the lack of emotion was a cover for all the pain inside.

I’ve reached the stage where it’s probably impossible to find any more answers. But maybe someone reading this might know more.

June would be 90 now. If she is out there, I would love to hear from her.