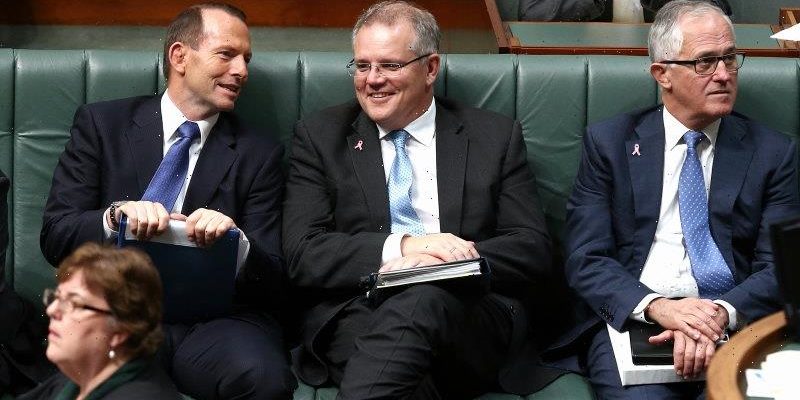 Because Scott Morrison has been Prime Minister for just three years and Australians are still learning about him, a sense of relative newness continues to attach to the government he leads. In reality, the government is well into middle age: it’s eight years old and is nearing the end of its third term. It has already outlasted the Fraser government and if it wins another term early next year – which at this stage seems more than likely – it will equal John Howard’s four election wins.

The Liberals’ continued electoral success while dumping not one but two sitting prime ministers is a big achievement. But winning elections cannot become an end in itself. Keeping your opponents out of government definitely counts for something – it keeps your supporters and donors happy, that’s for sure – but that’s not enough. It’s what you do with your time in office that matters most of all: the policies you choose, the legacy you want to leave behind not just in terms of those policies but ethically and morally. 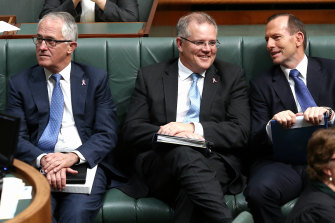 After three leaders and many years in power, what will be the legacy of this federal Liberal government? Credit:Alex Ellinghausen

Increasingly, on both sides of politics, it’s falling to leaders to dictate the direction of their parties. This is largely because political parties are now quite small institutions, with niche memberships. Leaders set the tone and heavily influence the behaviours and attitudes of their frontbenchers, backbenchers and supporters in the community. Where the Liberals are concerned, their continued incumbency in Canberra has tended to obscure the party’s condition across the country. It has some problems.

At the state level, it is comfortably in government in the two smallest states of South Australia and Tasmania and the Coalition government is looking shaky in the biggest state, New South Wales, which also happens to be the national locus of power in the Liberal Party. There, the Coalition rules in minority, despite the state Labor Party’s long-held status as a basket case. In Western Australia, following an election wipe-out early this year, there are just two Liberal members in the 59-seat lower house. In Queensland, the party cannot defeat Annastacia Palaszczuk; in the 32 years since Labor took office under Wayne Goss, the Liberals have occupied the state’s Treasury benches for a total of a mere five years.

In Victoria, the recycled leader Matthew Guy has been in some sort of arm-wrestling contest with federal MPs about who should represent the party in the State Parliament. That members of the Morrison government thought it was their business to try to preserve the career of former frontbencher Tim Smith after he disgraced himself tells us something disturbing about their mentality. Meanwhile, the restored Guy started reasonably well but has fallen back on bad habits, speaking out of both sides of his mouth about anti-Dan Andrews protesters who’ve been brandishing nooses in the streets. This threatens to be Guy’s 2018 African gangs routine all over again: for every vote he could pick up, he’ll lose another. 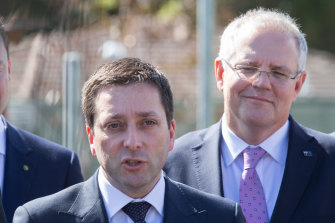 In Victoria, the federal Liberal Party has been in an arm-wrestle with the state party. Credit:Simon Schluter

Federally, the story is healthier in electoral terms, but for a government in its ninth year, there are few meaningful reforms to point to. John Howard in his first three years implemented gun law reform and remade the tax system despite resistance from many of his own people. What tough decision or difficult policy have the Liberals attempted to introduce since 2013? It could be said the Morrison government “got us through” the pandemic, except that it initially scoffed at the idea of JobKeeper before changing its mind and then turning on the money tap with few safeguards for recouping undeserved funds. Any government could do that. It then bungled the purchase and rollout of vaccines, losing valuable time, and it hid behind the states whenever possible. It rarely appeared to be leading.

That’s in the past. What big policy challenges lie ahead? The pursuit of a 2050 net zero emissions target? No, that’s a facade – a Potemkin village of a policy. The grand announcements ahead of COP26 about embracing the target and getting the Nationals on board are already turning to ashes. Listening to the Prime Minister and his deputy Barnaby Joyce walking it all back, it’s almost as if they’ve read Donald Horne’s 1964 book The Lucky Country and decided to see how quickly they could turn it into a 21st century reality. Horne wrote: “Australia is a lucky country run mainly by second-rate people who share its luck. It lives on other people’s ideas, and, although its ordinary people are adaptable, most of its leaders (in all fields) so lack curiosity about the events that surround them that they are often taken by surprise.”

Crafty politics and shameless, opportunistic utterances in politics have worked before, and they can easily work again. But they are corrosive. There is always a moral dimension to leadership. Each day, lessons are being handed down to the next generation of Liberal politicians about what government means and what is acceptable political behaviour. It’s hard to see how the way that Morrison is behaving now will leave the Liberals in good order in the long run.