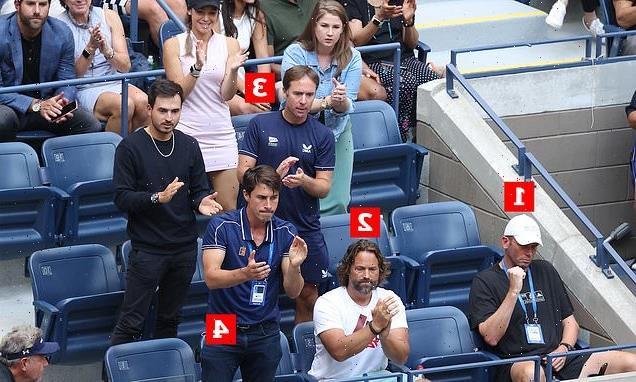 Who cheered on Emma Raducanu from her support box? Coach, physio and agent went wild for tennis star as she became Grand Slam champion – while her parents were stuck in Britain

Sadly, Emma’s parents were unable to fly to New York to watch their daughter’s win in person, because they couldn’t obtain the special exemption visa necessary to travel due to the Covid pandemic in time.

However she was cheered on by her devoted team, including her coach, physio and agent – who she gleefully embraced after her outstanding win at the US Open last night.

So, who were the vital coaching staff that watched Emma’s glorious win from the box last night? Here, FEMAIL reveals who’s who. 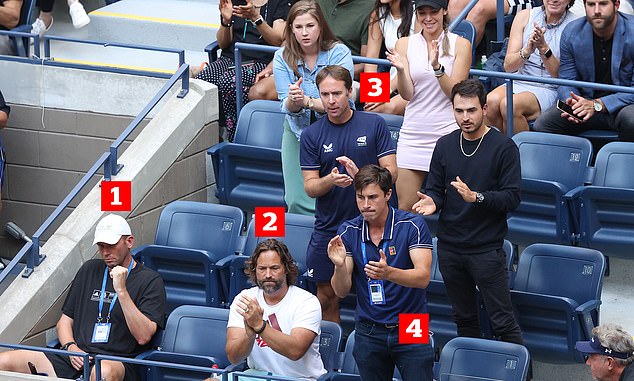 Last night’s astounding win was the culmination of the 18-year-old’s weeks of training under new coach Andrew Richardson.

Emma replaced her previous coach of three years Nigel Sears – Sir Andy Murray ‘s father-in-law – with Andrew shortly after Wimbledon, where the tennis sensation retired during her fourth-round match due to breathing difficulties.

The former tennis player, 47, competed in the singles draw of a Grand Slam three times, all at Wimbledon, in 1997 progressing to the third round. 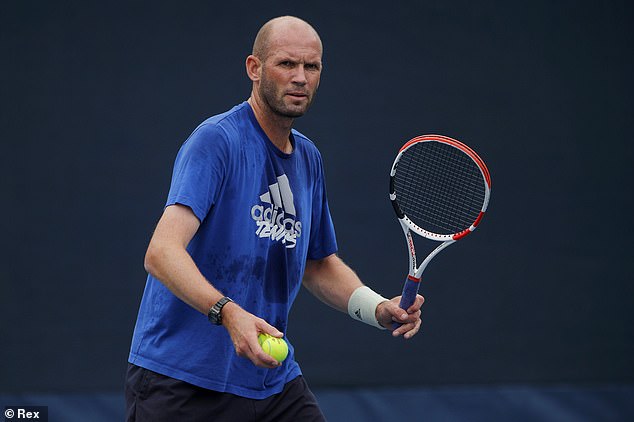 Last night’s astounding win was the culmination of the 18-year-old’s weeks of training under new coach and former tennis player Andrew Richardson, pictured practising with Emma earlier this year

Among others, he won a tournament on the ATP Challenger Tour with Tim Henman in 1995.

Henman even served as best man at his wedding to Lucy Heald in 1999.

After her semi-final win in the early hours of yesterday, Emma praised her new coach for providing support and inspiration. 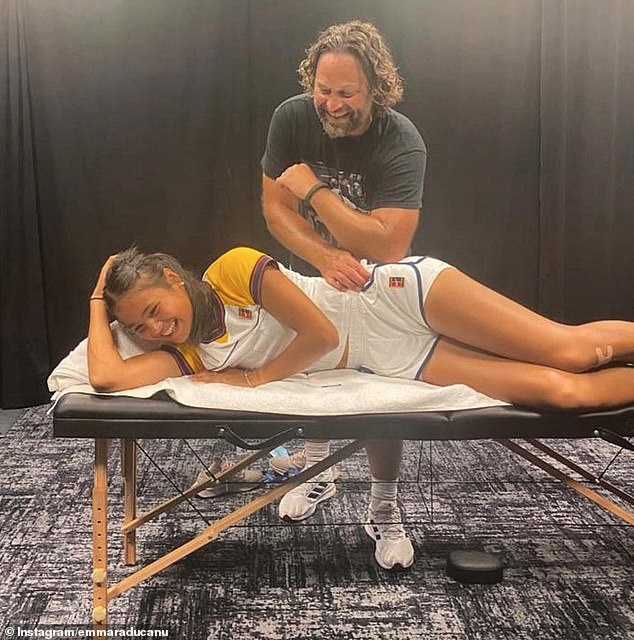 Physiotherapist Will Herbert, 43, was among the guests cheering on Emma during the US Open final yesterday evening

Physiotherapist Will Herbert, 43, was among the guests cheering on Emma during the US Open final yesterday evening.

Will, who was former top national junior and works as a tennis coach, is currently working as a physio for the the Lawn Tennis Association and was flown out to New York to aid British athletes.

He has over ten years of experience, starting his physio career with a sport science degree from Loughborough University before going on to coach at Dukes Meadows in west London.

His clients include Germany’s Alexander Zverev and former British number one Kyle Edmund. Emma has described him as her ‘mechanic’.

Sharing a picture of her win on Instagram last night, Will wrote: ‘What. Just. Happened?!

‘@emmaraducanu you are ridiculous. So impressed by you and really love how great you make us all look.’ 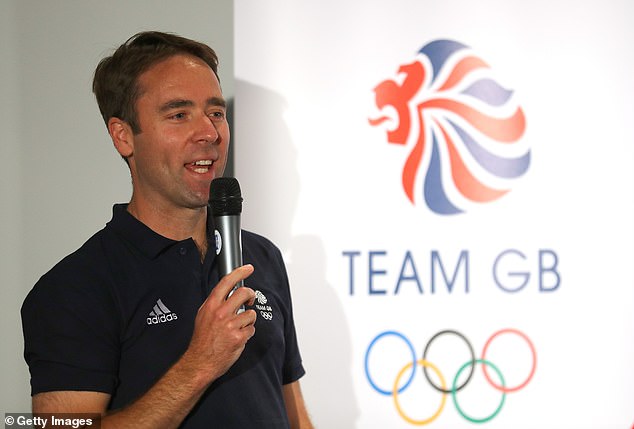 Joining her coach and physio to watch Emma’s victory was the Lawn Tennis Association’s head of women’s tennis, Iain Bates.

Iain was appointed as head of the LTA in 2013, taking over from British tennis coach, Leon Smith – another avid supporter of the tennis sensation.

He was previously LTA women’s tennis manager and worked closely with Judy Murray, mother of US Open and Olympic champion Andy Murray.

Earlier this week, he predicted that Emma’s success in New York will provide a double benefit – showing other GB players what can be done, while attracting larger numbers feeding in at grassroots level.

‘We have seen how engaging Emma is,’ he said. ‘She transcends the immediate tennis audience and that’s so important.

‘It’s easy to connect with her and she can incentivise more people to give tennis a go. 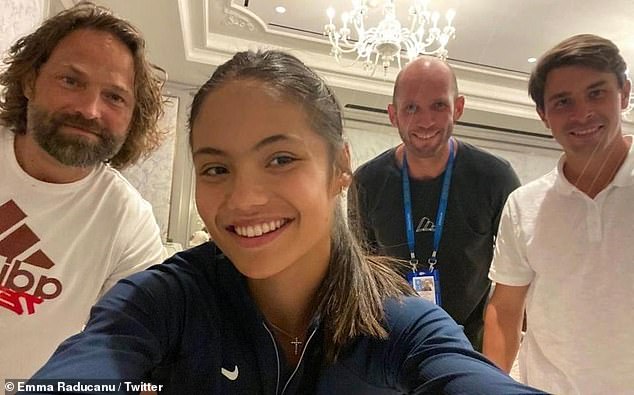 Chris was a professional tennis player on the ATP tour, achieving a world ranking of #1308 in singles and #1407 in doubles before retiring in 2015.

After retiring from the sport Chris coached for  UAB Men’s Tennis before working in marketing for Red Mountain Entertainment and then an advertising agency in Stamford, Connecticut.

Eventually, Helliar undertook his MBA degree and became talent agent at IMG in April this year – where he shares agency duties with Max Eisenbud, head of IMG’s player division.

The agency is known for representing esteemed players including Novak Djokovic, Maria Sharapova and Venus Williams.

Emma’s joy tinged with sadness: Teen says she ‘wished her parents were there’ to watch her win US Open after Covid rules kept them in UK

British tennis superstar Emma Raducanu has admitted that she wished her parents were in New York to watch her win the astonishing US Open final on Saturday after draconian Covid rules kept them in Britain in a candid post-match press conference.

The 18-year-old from Kent, who became Britain’s first female Grand Slam champion in 44 years after beating Canadian rival Lelyah Fernandez in straight sets at Flushing Meadows, revealed she doesn’t talk much about tennis with her parents.

Raducanu also said her ‘tough to please’ father told her ‘you’re even better than I thought’ after becoming the first Briton to win a major since Virginia Wade at Wimbledon in 1977 and the first qualifier to triumph in a Grand Slam, in either the men’s or women’s game. 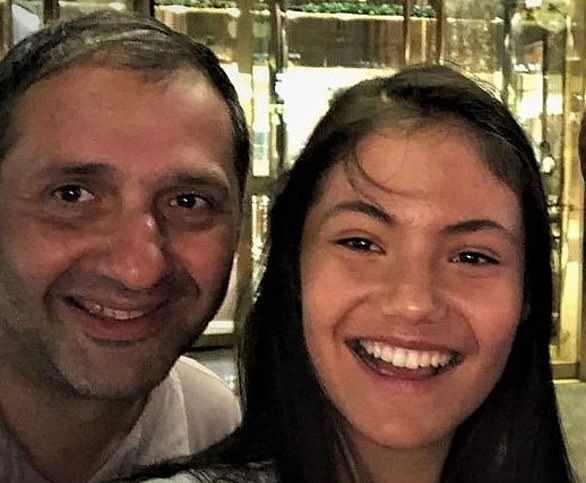 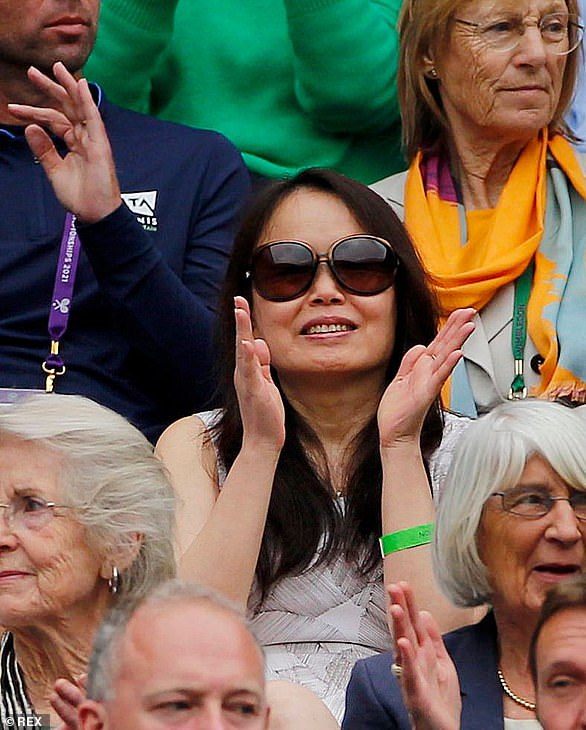 She told reporters: ‘I speak to my parents, we don’t really talk so much about tennis but they just really want to know how I am in these moments and, you know, to not have them here with me, I would have loved them to be here and we can all celebrate together or they could be with me and experience the same things but you know, they’re watching from home very proud.

‘My dad said to me ‘you’re even better than your dad thought’ so that was reassuring.

‘My dad’s definitely very tough to please but I managed to today.’

Raducanu’s parents Ian and Renee Raducanu have been hugely influential in their daughter’s remarkable journey.

Romanian Ian and Renee, who is Chinese, were living in Toronto, Canada, when only child Emma was born, and the family moved to the UK when she was two.

Both work in finance and home is in a cul-de-sac in Bromley, south-east London, where Emma and her dad would hit tennis balls together in the street during the Covid lockdowns.

However, they weren’t able to travel to the US to attend the tournament because of Covid rules.