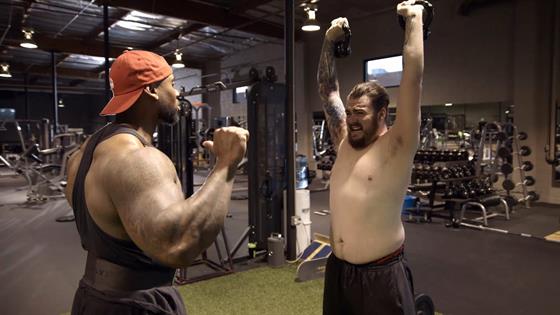 In this clip from Sunday’s all-new Revenge Body with Khloe Kardashian, the celebrity trainer teases what he has in store for the new participant.

“Everything I do is done 100,” Corey explains in a confessional. “It’s done intense, it’s done straightforward, it’s done with no excuses. And that’s what I like to call the Calliet way.”

Like Calliet has done with celebrity clients Michael B. Jordan and John Boyega, the fitness expert is ready to whip Logan into shape. However, Logan has some hurdles to overcome before going all in on the Calliet way.

Case in point: the reformed troublemaker is a pack-a-day smoker. Understandably, this doesn’t sit well with the Khloe Kardashian-approved trainer, who hopes to get Logan down to 185 pounds.

“Smoking slows you down! Smoking kills,” Calliet exclaims while Logan struggles through a workout. “How many cigarettes are you gonna smoke a day? Zero.”

Corey is further baffled when Logan reveals he’s a month behind on his rent. “You can’t afford to pay your rent, but you’re going to smoke a pack of cigarettes a day?” the weight loss pro notes.

“It’s called pain. It’s called your body is begging to get into shape,” Calliet retorts. “Every day you come here, I’m gonna get in your ass and I’m gonna make you work. You know why? ‘Cause I don’t want to see you be the person you was when you came here today.”

This rousing speech resonates with Logan, who has felt like “nothing” thanks to his brother.

“I want to be f–king something now,” a hyped Logan declares.

Watch Corey and Logan’s first gym meetup in the clip above!

Watch a brand new episode of Revenge Body With Khloe Kardashian Sunday at 9 p.m., only on E!