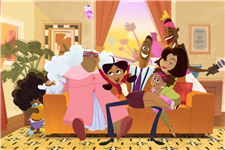 Big nostalgic news for fans of Disney’s The Proud Family! Your favorite early 2000’s family cartoon is back, and it’s even louder, and prouder.

Just one year after Disney confirmed that The Proud Family would indeed be getting a long-rumored reboot, Disney+  has just released a trailer for the new 2021 series, The Proud Family: Louder And Prouder.

Though it features updated animation, Louder and Prouder will bring back its full original cast. Kyla Pratt reprises her role as Penny Proud, with Tommy Davidson and Paula Jai Parker returning as parents Oscar and Judy Proud and Jo Marie Payton as Suga Mama.

Recurring characters Dijonay Jones, Zoey Howzer, and LaCienega Boulevardes will each be voiced by their original actors, Karen Malina White, Soleil Moon Frye, and Alisa Reyes. And of course, Cedric the Entertainer returns as the flashy and soulful Uncle Bobby Proud.

The show’s iconic original theme song, famously sung by Solange with a little backup from Destiny’s Child, is also getting a 2022 update. Critically acclaimed R&B newcomer Joyce Wrice takes the reigns with a reimagining of the classic theme.

“We wanted to reimagine it,” said Kurt Farquhar, Proud Family series songwriter and composer for both the original and the reboot in a behind-the-scenes sneak peek. “We wanted to make a person that grew up with it feel like that’s still their song, but at the same time, we wanted it to feel like it’s been brought into a new time.”

“I was a fan of it growing up,” said Wrice. “The theme song is just so iconic. It’s timeless, it’s classic.”

In the newly released trailer clip, we see Penny embracing the changes of puberty and all that comes with it – mainly boys. But, unsurprisingly, her father Oscar is not feeling it and hilariously does everything in his power to block his baby girl from growing up.

“No dating until you’re married!” Oscar exclaims, covering Penny in a full knight’s suit of armor before she gets ready to go out. Take a look below:

The Proud Family: Louder and Prouder premieres on Disney + streaming on February 23.