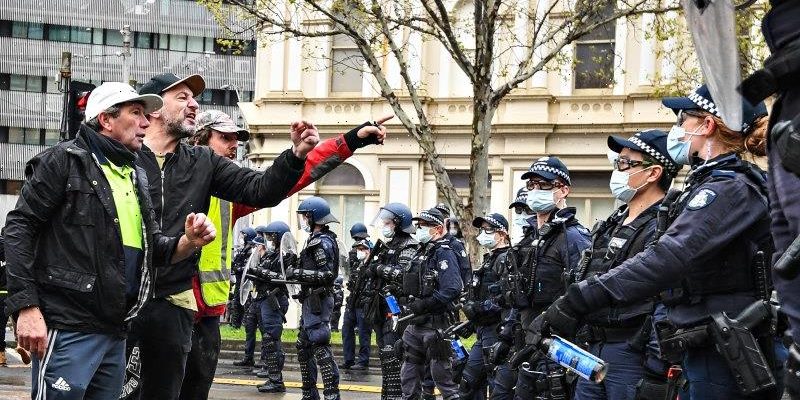 Australia’s trade unions had a unified position on mandatory vaccines when the coronavirus pandemic started: they opposed employers creating their own “no jab, no job” rules but supported orders backed by health officials.

That line is now less clear. Unionists are talking at cross purposes after rolling protests by construction workers over the past few days exposed fault lines in the movement. 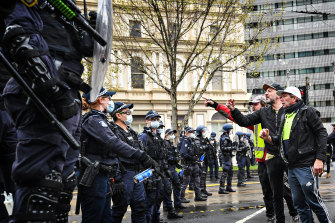 Police and the CFMEU were confronted on Monday by a high-vis clad crowd angry at vaccine mandates.Credit:Justin McManus

The Victorian construction, plumbing, manufacturing and electricians’ unions declared on Monday night the state government’s mandatory vaccination order for the building sector was “unworkable and heavy-handed”, even though it had been backed by the Chief Health Officer. Their counterparts in Queensland have expressed a similar view, as has the maritime union in Sydney.

Whatever the wisdom of imposing Friday’s mandate on what turned out to be a volatile situation, the unions’ statement had no explicit words of encouragement for vaccinations, only “informed choice”.

At about the same time, Australian Council of Trade Unions secretary Sally McManus was vowing the unions would not be intimidated by extremist anti-vaxxers on the ABC’s 7.30 program.

“We will put safety first, we support people getting vaccinated,” she said.

The next day, the nurses’ union told protesters to stop “fighting for the right to overwhelm our health system” and the boss of the Victorian Trades Hall Council, Luke Hilakari, all but backed mandatory jabs.

“You can make your own choice about vaccination, but you don’t get to put your workplace and your workmates at risk,” he wrote in an opinion piece for The Age.

Unionists blame outsiders including neo-fascists for targeting their members with anti-vaccination propaganda. The CFMEU, which has managed to keep its industry open until now when many others have been forced to shut their doors, has put significant money behind pro-vaccination ads.

That is all true but the unions also have a stance on mandatory jabs that is as clear as mud.

In some, it is combined with an ethos that is more anti-authority than the movement’s traditional view that government intervention is a good thing everywhere from ownership of public utilities to healthcare.

“Yes we do,” Trumka told the Washington Journal program. Why? “Well because it’s important … If you come back in and you’re not vaccinated, everybody in that workplace is jeopardised.”