When the #MeToo hashtag went viral on social media in October 2017, triggered by the Harvey Weinstein scandal, it encouraged women across the world, not just in Western countries, to speak out about their experiences of sexual harassment and assault.

Powerful men like Weinstein, who faces five charges including rape and predatory sexual assault in a trial underway in New York City, have traditionally used their wealth and influence to silence victims and shield themselves from the law. Now, for the first time, they were being held accountable for their actions.

While the momentum of #MeToo reporting appears to have waned, the issue has returned to the spotlight with a spate of TV shows, films and books about its chief heroes and villains. The dramatic downfall of Roger Ailes, the former CEO and chairman of Fox News and a serial sexual predator, has been charted by Russell Crowe in an award-winning performance in the miniseries The Loudest Voice, while the fightback story of Ailes’s victims is portrayed in the recently released feature film Bombshell, starring Charlize Theron, Nicole Kidman and Margot Robbie. 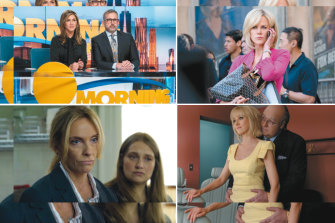 Apple TV’s Morning Wars, meanwhile, headlined by Jennifer Aniston, Reese Witherspoon and Steve Carell, is loosely based on the firing of NBC breakfast host Matt Lauer in November 2017 after a serious sexual misconduct claim was lodged against him. And the critically acclaimed Netflix miniseries Unbelievable, starring Toni Collette – based on an award-winning investigative story about a teenager charged with lying about rape whose story was later found to be true – has notched up viewing figures of 32 million households in the US.

In bookshops over Christmas, She Said, by Jodi Kantor and Megan Twohey – the two New York Times journalists who broke the Weinstein story – and Ronan Farrow’s Catch and Kill, which recounts the uphill battle he faced convincing Weinstein’s victims to speak out, were bestsellers.

All these films, TV series and books illustrate that a seismic shift has occurred in popular culture, says Bianca Fileborn, co-editor of #MeToo and the Politics of Social Change, and a lecturer in criminology at the University of Melbourne.

“It has meant that we’re still seeing frequent reporting and public discussion of the movement, especially now the Weinstein trial has begun.” Most importantly, she adds, seeing these stories on the screen and page, however glossily portrayed, should encourage other survivors to open up – and be believed.

To read more from Good Weekend magazine, visit our page at The Sydney Morning Herald, The Age and Brisbane Times.