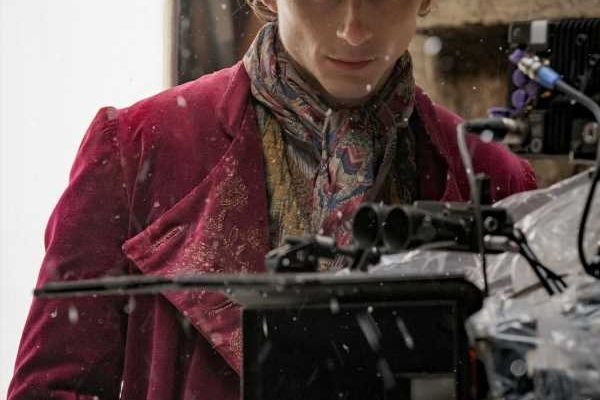 That chiseled jawline and messy head of hair covered by a top hat can only mean one thing—we finally have the first look at Timothée Chalamet as Willy Wonka in the upcoming film, Wonka, an origin story about the infamous candyman. Though Chalamet’s role in the film was originally announced in May of this year, many forgot the young actor would be taking on the character, but when Chalamet posted the photos on Sunday night, it quickly reminded everyone that, yes, this is indeed a thing that’s happening.

“The suspense is terrible,I hope it will last…” Chalamet captioned his post, which features Wonka in his full get-up, giving a spooky side-eyed glance to someone in the distance. Just moments after the photos were shared, the internet jumped into action, and unsurprisingly, they held nothing back. The first comments were mostly focused on Wonka’s look, which felt a little too Dickensian to some. Or, more specifically, the Muppets’ take on Dickens.

Other pop culture references came to mind as well.

Some were a little triggered by the “fuck boy” nature of Chalamet’s Wonka.

Chalamet is the third actor to take on the role of Willy Wonka. Gene Wilder originated the character in the 1971 classic, with Johnny Depp taking over the reins in Tim Burton’s 2005 remake. Now, with Chalamet on board, some are noticing the attractiveness of Wonka is on an upward trajectory.

Wonka will act as an origin story for Willy, telling the tale of how a young eccentric came to own a slave-driven candy factory. The movie comes as many other famous characters have recently gotten origin stories of their own, including Cruella de Vil in this year’s Cruella. Since Roald Dahl’s classic book from which the first two movies were based does not cover Wonka’s upbringing, the story will be a new one for fans of the classic. Still, some don’t feel this barrage of origin stories from Hollywood is really necessary.

No matter what the Internet thinks, filming for Wonka is underway, and Timmie will be singing and dancing onto our screen in 2023, so do whatever you have to do before then in order to prepare yourself.