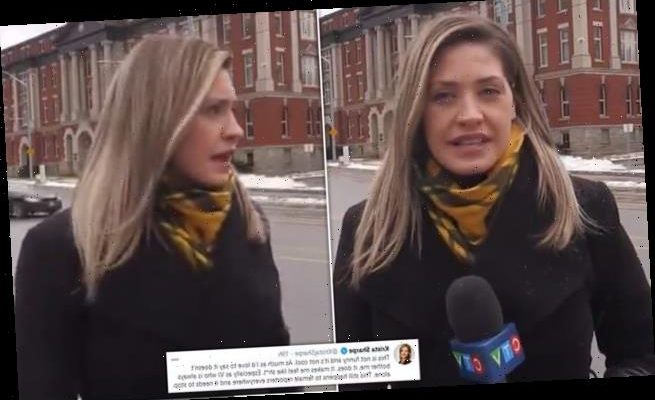 A television reporter has shared a clip of abuse she received from a passer-by in a car during a live outdoor broadcast, saying: ‘This still happens to female reporters and it needs to stop’.

Canadian journalist Krista Sharpe shared a video clip on Twitter on Monday following the report for CTV News in the town of Kitchener in Ontario.

A man in a car driving behind the reporter is heard shouting ‘f*** her in the p****’ at Sharpe. Clearly shocked, the news journalist looks over in the direction of the car before trying to compose herself.

Canadian journalist Krista Sharpe was subjected to sexual harassment during a live broadcast in Ontario. After she posted the clip online Ms Sharpe said the incident had made her feel like s*** 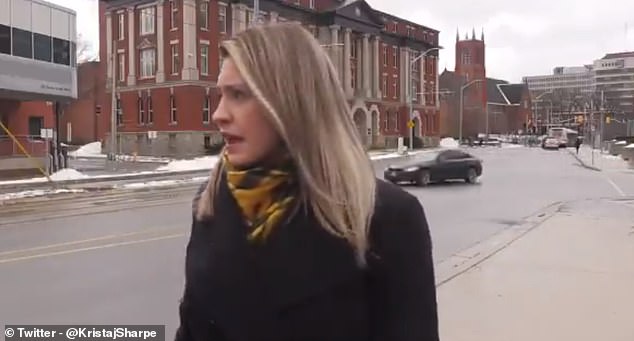 ‘This still happens to female reporters and it needs to stop’ Sharpe is seen looking visibly shocked by the abuse; some two million people have now watched the clip online

She wrote: ‘This is not funny and it’s not cool. As much as I’d love to say it doesn’t bother me, it does.

‘It makes me feel like s**t. Especially as VJ (video journalist) who is always alone.’

Sharpe added: ‘This still happens to female reporters everywhere and it needs to stop.’

More than 2 million people have since watched the clip and the incident is being investigated by Waterloo Regional Police.

Thousands have responded to Sharpe’s tweet, defending her right to broadcast safely without harassment.

@SeanPrevil wrote: ‘I’m sorry that you had to deal with this. I’ll never understand why immature people think this is funny, it’s not, it’s just stupid.’

@PennyDaflos added: ‘This is harassment at the workplace and should be handled the same way as a postal worker or teacher or healthcare worker faced with such comments.

‘Journalists do our work in public but that doesn’t mean abuse of any kind should be tolerated. I’m sorry you had to deal with this.’

@also_learning penned: ‘I didn’t understand what was shouted, but obviously, it was offensive – I’m so sorry you are subject to these insults.

‘I hope that if it happens again, the camera person could pan to the individual screaming; at the very least, they should be identified and publicly shamed.’

@DaRealDanBaulch added: ‘My heart breaks for you and every woman who has to put up with this. It shouldn’t be this way. The pain on your face…I’m sorry.’

Others said they thought Sharpe should be prepared that members of the public aren’t always pleasant.

@JessicaNGooch tweeted: ‘Both sides. We can teach kids the right way but do they always listen? Give her tough skin to know that Freedom of Speech isn’t always nice. My 14y/o knows this…’

@step4battle added: ‘You gotta toughen up. We just had a raccoon with horns do some kind of chant while storming the Capitol. It’s not gonna change in your lifetime.’