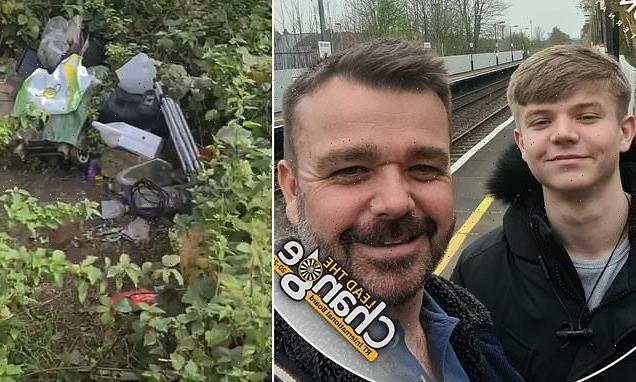 Tree surgeon reveals shock after discovering a woman was living in a hedge for three years – in a ‘home’ consisting of tarpaulin, umbrellas and a few blankets

A woman believed to be in her 50s has been discovered living in a hedge for as long as three years – telling a shocked tree surgeon she couldn’t bear to be parted from her cat.

Gareth Olsen was clearing a field in Chester for a client when he stumbled across the woman sleeping rough in a makeshift ‘home’ among the overgrowth.

He said she told him she couldn’t bear to be parted from her cat and any accommodation she had been found in the past would not accept her pet, so she ended up living in a hedge.

Her ‘home’ consisted of a tarpaulin, a few umbrellas, an old sleeping bag and blankets and cushions, with her worldly possessions scattered around her in bags and boxes. 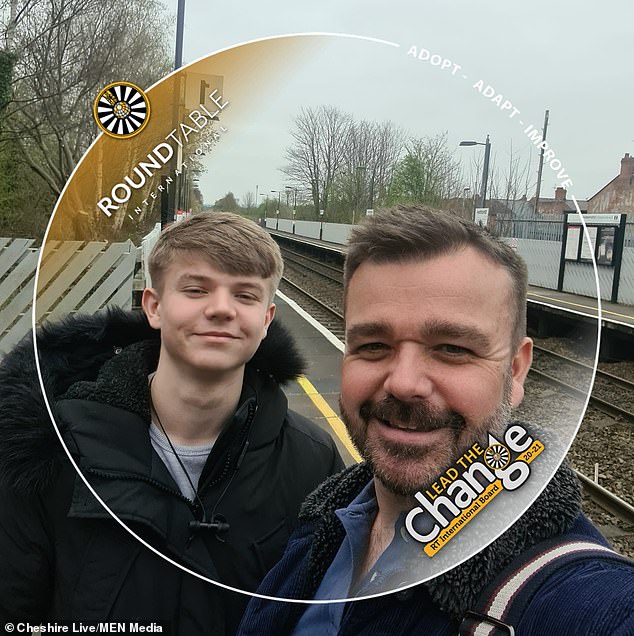 Gareth said he was shocked to think she had been living there in all weathers and he quickly stepped in to ensure she had the support she needed courtesy of a local homeless charity, Supporting Homeless, Assisting Refugees Everywhere (SHARE).

He said he was stunned to make the discovery and had to think quickly to decide what to do to help her, giving her the change in his pocket so she could buy some food.

He also called his friend Adam Dandy, from SHARE, so its team could swing into action to support her.

Gareth, who is chair of Deeside Round Table as well as running Groundswise tree surgery, said he couldn’t believe the woman had managed to survive in these conditions. 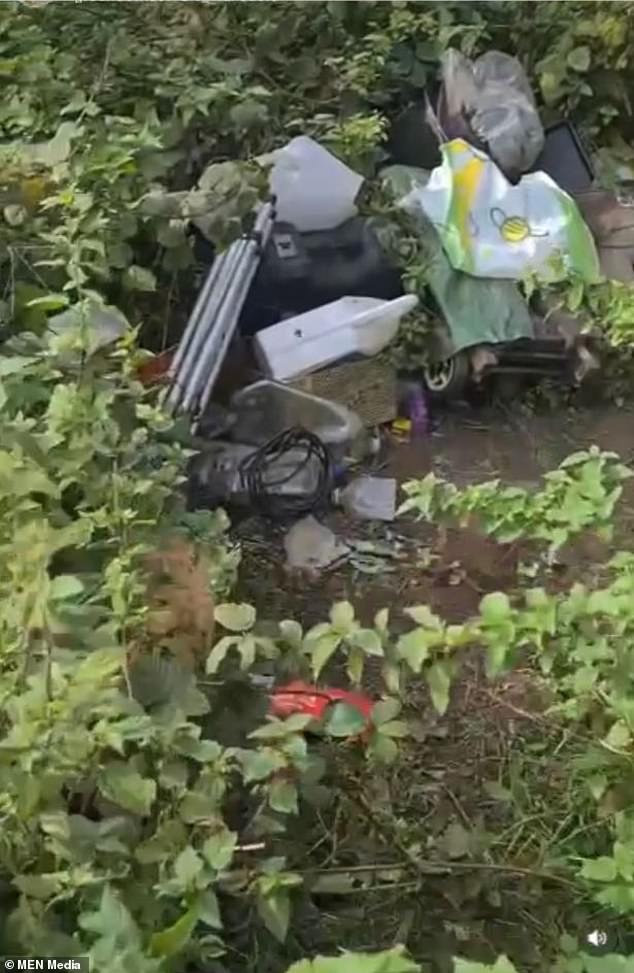 He said the woman – believed to be in her fifties – told him she couldn’t bear to be parted from her cat and any accommodation she had been found in the past would not accept her pet, so she ended up living in a hedge

Gareth said: ‘It’s such a sad story. I felt so shocked and sorry for her. I was clearing a piece of land for a private landlord and it hadn’t been touched for years.

‘One of our guys was in a tractor and a little hand appeared out of the hedge waving and saying ‘I live here’.

‘Now, I do charity work in Deeside but I don’t have any contacts here in Chester so I thought ‘what can I do?’.

‘Then I thought I’d call my friend Adam Dandy as he does a lot with the SHARE charity and they have sent their outreach team out to help this lady.

‘Bless her. When I first met her I said I hope you don’t mind me asking but how long have you been here and she said a couple of years – probably two or three. 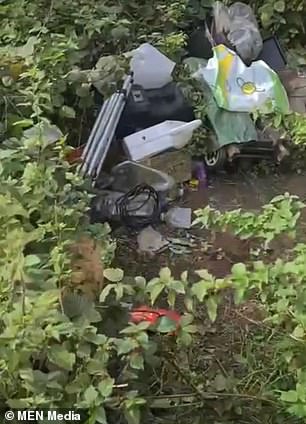 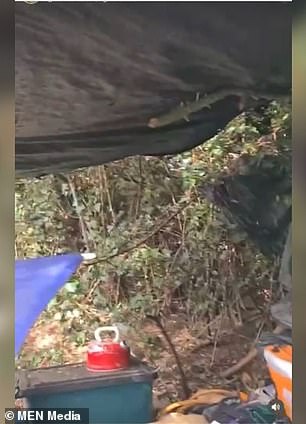 The tree surgeon shared a clip of her makeshift home, adding it was ‘such a sad story’ and she was ‘quite a hardy person’

‘I asked her how she was managing and she said she was quite a hardy person and all she really needed was a sleeping bag as hers had seen better days. She was clearly not doing well.

‘She was awfully nervous too, thinking we were going to kick her off the site. I said no, I’d like to try to help her. I wasn’t leaving her there.

‘I couldn’t sleep that night, wanting to make sure she was OK. She was insistent at first that she would just move on and make sure the site was tidied before she did so.

‘I’m 43 and a tree surgeon and I consider myself quite hardy but I could not do what she has been doing.

‘She had a tarpaulin, some umbrellas and cushions and her worldly possessions in bags and boxes.

‘It was pretty shocking. It’s literally a place to exist. She was clearly keeping herself out of the way.

‘I asked her if she had had any accommodation and she said she had done over the years but she has had a cat for a few years who she described as her ‘soulmate’ and lots of places wouldn’t take her cat. I’m glad that it all came good in the end and she is now getting support.’

Adam said SHARE’s outreach team was informed and given a grid reference and with the help and assistance of other local agencies the woman is now receiving help to find housing.

Adam added: ‘Whilst this incident is shocking to us all, we would like to thank everyone involved in helping us to help this lady as soon as we were informed of her location and predicament, especially ForFutures, Cheshire West and Chester Council, and Chester Police, and special thanks to the tree surgeon Gareth Olsen.’