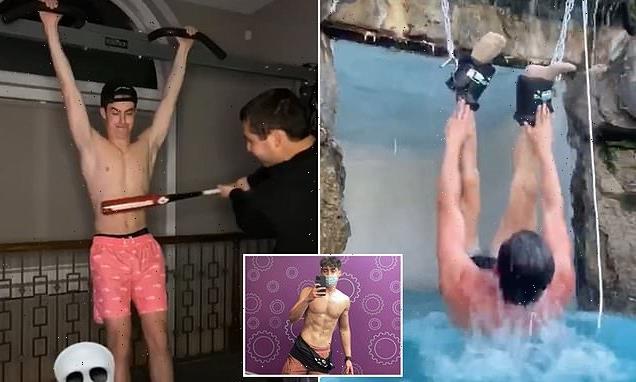 And you thought YOUR workouts were tough! 20-year-old goes viral with his insane gym routines that include UNDERWATER sit-ups – and getting hit in the abs with a BASEBALL BAT

A man has gone viral on TikTok for his extreme fitness regime which includes ab raises done upside down while submerged in water and balancing on a ball while doing squats with weights.

Cory Rosenthal, 20 years old, from New Jersey, grew up in a fitness-oriented family.

From the age of 16, the student at Indiana University, would train frequently at his father’s gym and played basketball at school.

When the pandemic hit, Cory decided to take his training to the next level by performing extreme bodyweight exercises to improve his fitness levels ahead of a bear crawl competition. 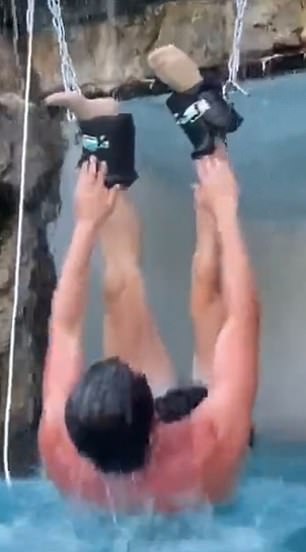 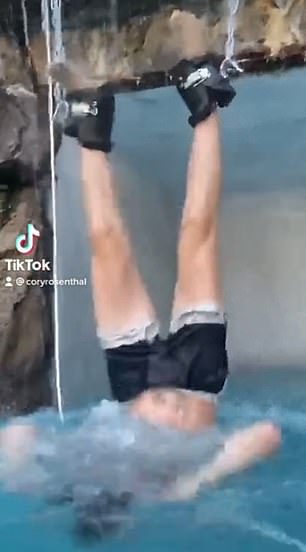 That’s one way to get a six-pack! A 20-year-old fitness fanatic has gone viral on TikTok while documenting his insane workouts – including underwater sit-ups 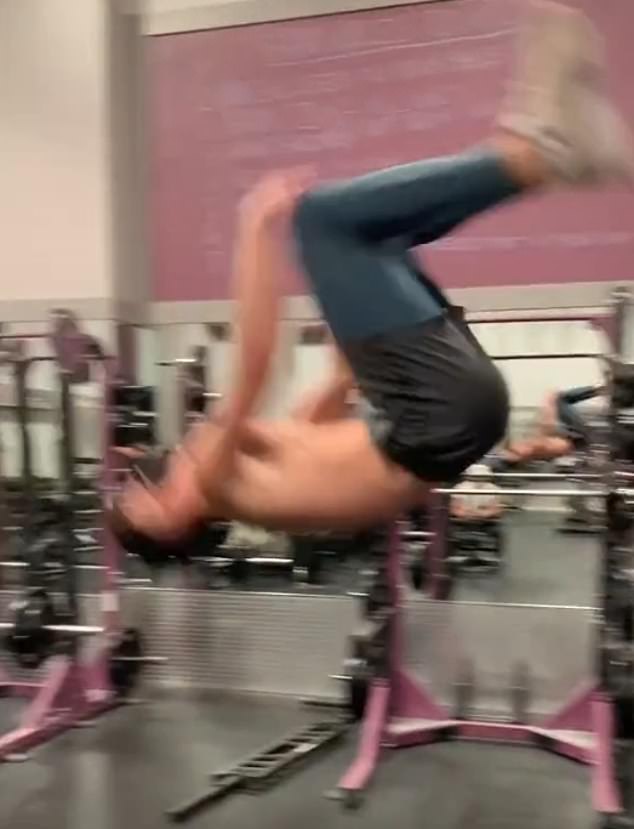 Flippin’ incredible! Cory Rosenthal, from New Jersey, began experimenting with more intense workouts during quarantine, and has now mastered a host of new – and dangerous – skills 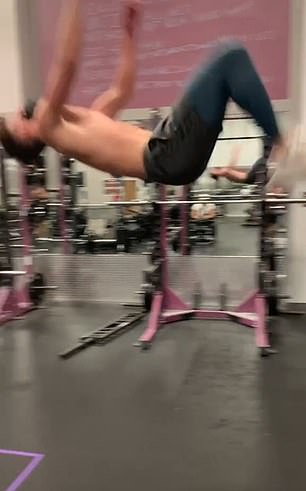 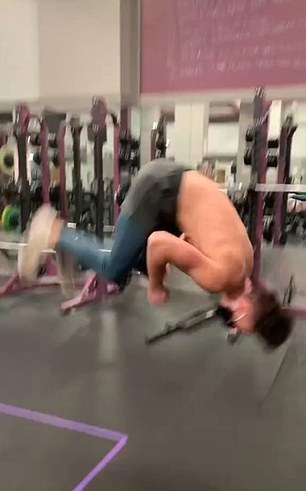 Head over heels! He said that he is particularly fond of implementing backflips into his workouts because they help to tone your core 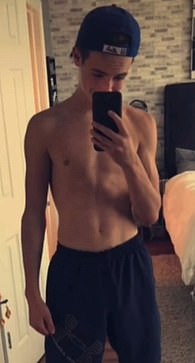 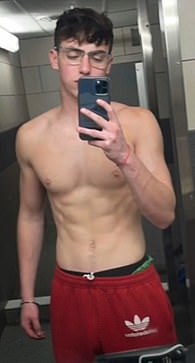 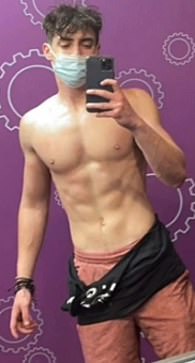 Progress: Cory has been tracking his physical transformation as well as his workouts

He has videos of his daredevil moves on TikTok, where social media users are now convinced he’s training for the Avengers.

The unusual exercises include backflips, balancing on a bosu ball while lifting weights and even ab raises while hanging upside down, submerged in water.

‘My training process is different, it’s a bit unusual,’ he told Jam Press.

‘You’re not going to see me squatting, curling, benching because I get bored of doing those things, I like to always be actively moving.

‘It varies everyday. I spice things up.’

Speaking about some his favorite exercises, he added: ‘I always like incorporating backflips into my workouts because it’s a great core workout.

‘I also enjoy standing on a balance board just to loosen up my hips and always end my workouts by going into the sauna for 5-10 minutes.

Cory recently posted a compilation video of workouts on his TikTok page, which has racked up over two million views and 567,500 likes so far.

‘Bro is training to join the avengers,’ one person wrote.

‘Bro what you training for? The hunger games? Damn,’ another person added.

‘Is there a war I don’t know about?’ wrote someone else.

In another video, Cory is seen balancing on a board while holding on to two weightlifting plates, performing push ups in an incredible balancing act.

Tiktok users were stunned at Cory’s remarkable core strength, with one saying: ‘I have so much respect for u bro.’

‘What is you training for,’ another asked to which Cory replied, ‘It’s a secret.’

In a few words of advice for people who wish to upgrade their fitness level, Cory said: ‘There are many alternatives to lead up to more challenges. 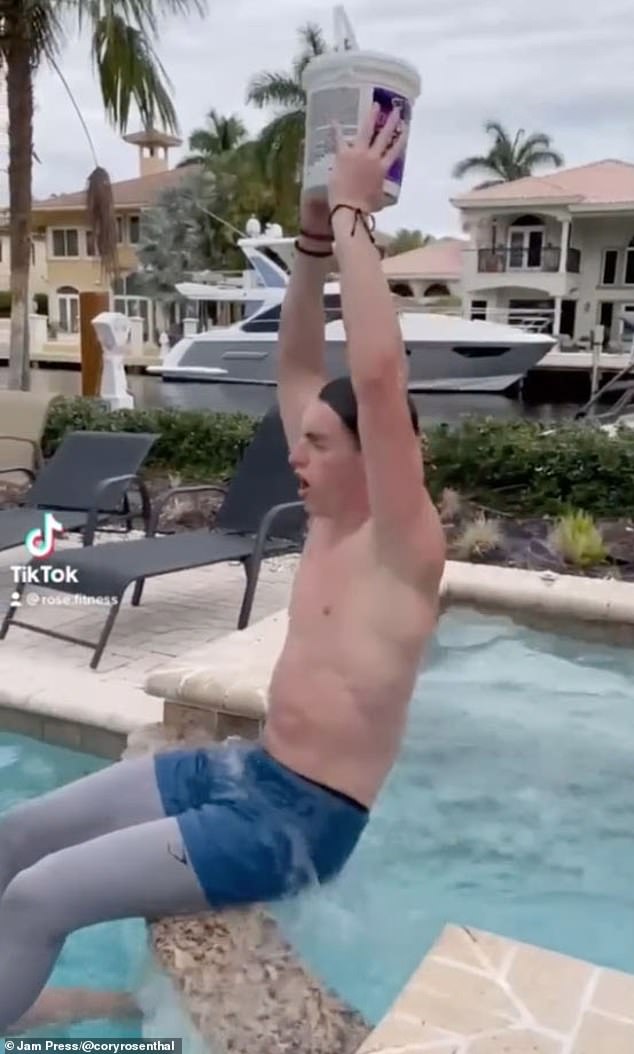 Taking the plunge: He uses water to add natural resistance while doing sit-ups, and can often be seen submerging himself while working his abs 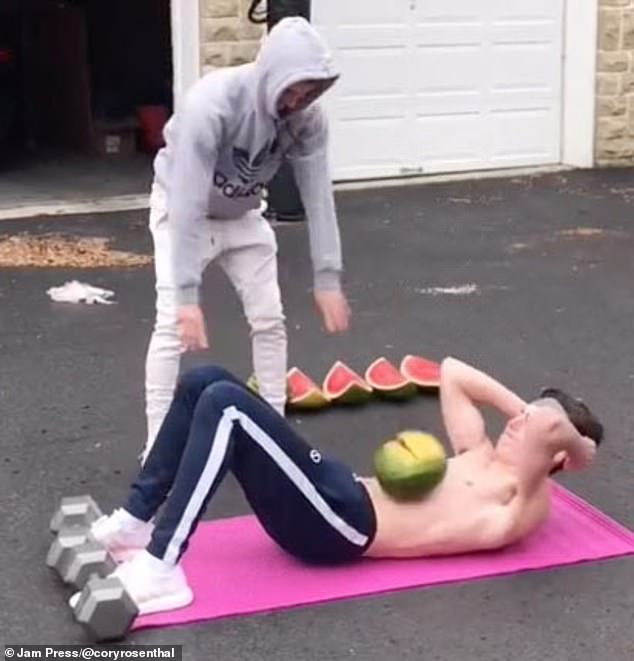 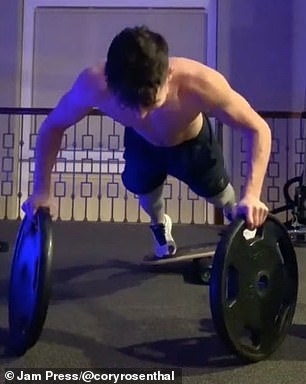 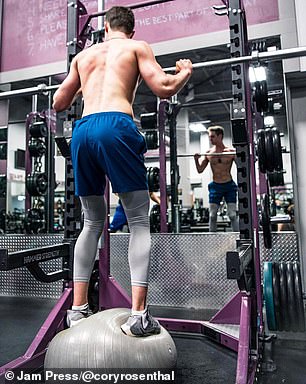 Skyrocketing to fame: Cory has earned millions of views with his quirky workout videos, and has been flooded with comments from stunned TikTok users 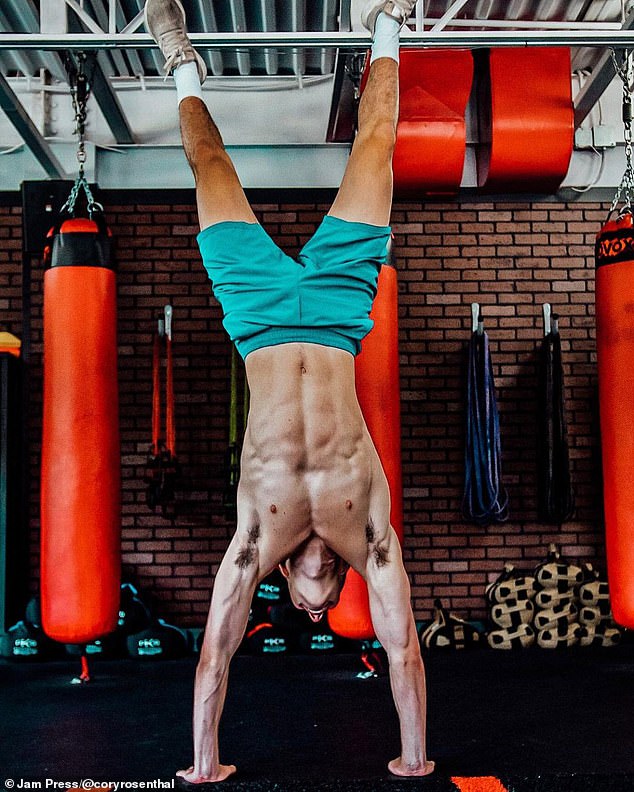 Keeping it interesting: You’re not going to see me squatting, curling, benching because I get bored of doing those things, I like to always be actively moving,’ Cory said of his workouts

‘For myself, I have worked with a ton of coaches; I had a backflip and calisthenics coach, a boxing coach, even a bear crawling coach.

‘For instance, you can progress on muscle-ups by doing banded muscle up and get your form down, rather than putting a ton of tension and injuring your shoulder.

‘Or you can have people spot you while you flip so that level of fear goes away.

‘I love workouts that fire up my heart rate. I go into them saying ‘how I am going to shock my body today’.

‘I want to challenge myself every single day – to be the new era of fitness, I like to change the game and not do the normal.’