When Kate Mulholland decided to leave her husband of 29 years in November, the judgment she got from friends blindsided her.

She was expecting the usual sympathy-tinged insults about how she’d be lonely, with nothing but Lean Cuisine to keep her warm. What she got was more like an emotional drive-by shooting. 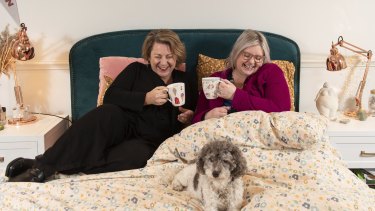 “I just needed to just be me,” says podcaster Kate Mulholland, right, of breaking up with her husband of 29 years, last year. She and comedian Nelly Thomas, left, have a new podcast about midlife breakups.Credit:Penny Stephens

“Someone asked me if I had taken a vow of poverty,” says Mulholland of a friend who asked why she’d choose to be single when she was just shy of 50 and lacking a financially secure career. (She recently wound up a 12-year career staging houses.)

Another friend chided: “the kids would never want this, would they?”

“Well, no, of course nobody wants this,” says Mulholland, a mother of five children aged 16 to 28, including twins with special needs. “It’s not something you wake up in the morning [and think], ‘I think I’ll f–k up everybody’s life today’.”

But the marriage had “run its course”, she says, adding that she and her ex-husband are still friends. She’s happy. “I just needed to just be me,” she says. “I had to leave.” 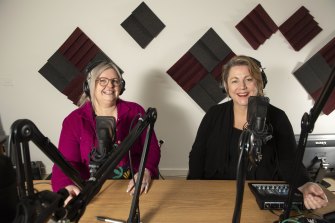 It’s just one of the reasons why Mulholland and her friend Nelly Thomas, a Melbourne comedian, launched a raunchy podcast in April celebrating all the unexpected joys – and laugh-out-loud challenges – of being suddenly single in midlife.

“It’s a narrative we don’t have culturally,” says Thomas, 47, about people who are happier being alone or dating than being in a relationship in which they aren’t “fulfilled”.

Thomas, who shares two daughters (aged nine and 14) with her ex-husband, is single for the first time since 2000. “I wouldn’t change it for anything,” she says.

“What I thought I deserved in my 20s is very different to what is in my 40s,” she says. When younger, she had poor self-esteem and believed she was “not smart enough, not pretty enough”.

Mulholland and Thomas’ podcast, The Single Life Of Us, covers everything from the liberation of sex in your 40s, to what it means when someone on a dating app includes pictures of their kids (poor judgment). It has already struck a nerve.

“Someone who listens to the podcast put a sticker on themselves that said, ‘Will never suck a d–k’, and took a photo [and sent it in],” says Mulholland.

This stemmed from one of Mulholland’s revelations in the podcast about deciding she’ll never perform oral sex on a man again.

This is only one “epiphany” that has come to her since being single. She’s also found an unexpected joy in her new self-reliance. (Even taking out the bins, she says, is a thrill: she can do what she wants when she wants.)

They’re messages that many of Tamara Cavenett’s clients may well appreciate.

The president of the Australian Psychological Society and a clinical psychologist, Cavenett says many middle-age clients are unhappy in their relationships but terrified to leave.

“That’s probably one of the more primary fears that people do speak of,” she says. “If I end this relationship, what then?

“[But] I do have a lot of clients who actually say they’re happy on their own. And others definitely end up in a happier relationship the second time around because they’ve met someone who more clearly matches their values.”

More people are now arguably having to navigate the pitfalls and, yes, judgmental friends, that come with midlife breakups, since the pandemic.

“There definitely is a spike in separations and divorce after crises,” says Elizabeth Shaw, chief executive of Relationships Australia. “[Those] events lead to people re-examining their relationships, often feeling very challenged or let down.”

Cavenett encourages people not to jump into intimacy with someone new until they feel ready and to not be afraid to communicate what you want sexually.

Many clients have said that middle-age sex is the best they’ve ever had because they’re more comfortable with their bodies, she says.

Thomas, who has recently discovered the joys of sexting, has some advice: make sure you send a sext to the right person.

“One of my friends did a snatch picture and she accidentally sent it to her neighbour,” she says. “She had to take a bottle of champagne over.”

Thomas recently had her heart broken while dating a woman who wasn’t ultimately interested in a relationship, but she still revels in the fact that she feels more confident than ever.

“[Dating] cannot be harder than leaving a 21-year-relationship,” she says. “It can’t be, when you’ve got kids. I can be hurt [while dating], but I also feel, not bulletproof, but I know how tough I am. I can risk [getting my feelings hurt] more.”

Make the most of your health, relationships, fitness and nutrition with our Live Well newsletter. Get it in your inbox every Monday.

Most Viewed in Lifestyle