"What's so good about putting words together?" asks Henry, a playwright. Tom Stoppard, a real playwright, incorporates reviewing his own writing into what he facetiously – or not – calls The Real Thing. In fact, one could almost review this play entirely using Stoppard's words – or possibly a review of the review. For just as Max builds a card-house in the opening play-within-a-play, Stoppard builds the equivalent of a modern Sydney apartment block: a tower of dazzling conceits. While simultaneously questioning the point of writing and vigorously championing "good" writing, he lampoons his own work's tendency to exalt mind over what matters.

In this instance what matters is love, and not just any old love, but the real thing. Does that actually exist, he asks, other than in the mind of a rampant romantic like Henry, who is in love with the idea of being in love? The play holds up a mirror, not to Stoppard himself, but to a reflection of Stoppard, so the images multiply to infinity, and refracted mirages of the characters' hearts appear and disappear. 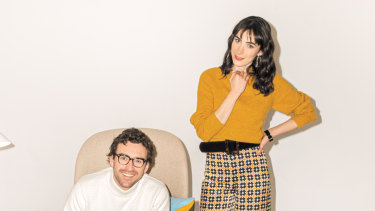 Although he probably came closer in this 1982 play than in any other, Stoppard ultimately still shatters all those images against the unforgiving brick wall of his simply being better at letting his racing wit bound across the infinite field of ideas than at letting his characters emote. As Henry confesses to Annie, "I don't know how to write love … It's either childish or it's rude … It's happiness expressed in banality and lust."

Stoppard was being slightly hard on himself (although not on Henry) there, as he does allow playwright Henry (Johnny Carr) and actor Annie (Geraldine Hakewill) to feel. In one of several perspicacious speeches Henry observes that he loves how the insularity of passion "blurs the distinction between everyone who isn't one's lover". Yet you wonder about this thing they call love, pressurised, as it is, by infidelity. You wonder whether they don't love enough to hate, or love too much for, as Henry says, "it to flip into its opposite".

Carr and Hakewill are at their best when Stoppard's touch is at its lightest and most playful. When Annie's infidelity rears up like a horned monster, the actors strive for the intensity Stoppard intended, but it lies tantalisingly out of reach of truly moving us, because the words aren't there to support it. As he would say, they're not in the right order. So Stoppard has them tripping over his own inability to sidestep a creeping banality, culminating in lines with the distorted ring of a poorly wrought bell.

Perhaps director Simon Phillips needed his leads to underplay the emotional climaxes more, but I doubt it. Quite simply the play, like all Stoppard, is best when funniest, and some of this one is gloriously so. Maximising the humour is Julia Robertson, triumphing as Debbie, Henry's daughter, who, at 17, already has a firmer grip on the currency of human liaisons than her father will ever have. Rachel Gordon (Charlotte, Debbie's mother) and Charlie Garber (Max, Annie's ex) experience a tougher time striking the right pitch between the comic stiltedness of the play-within-the-play and the ongoing preening archness of their characters when offstage.

Shiv Palekar and Dorje Swallow fill out the minor roles, and everyone pulls their weight, yet Phillips' Charles Davis-designed production somehow needs to throw some ballast overboard, so it rides a little higher on the undulating sea of Stoppard's words.

“I have a ‘poor’ credit score – but what does that actually mean?”
TV & Movies