The NBC smash that has spanned generations, Friends, may not be there for you on Netflix starting 2020, but thanks to Pottery Barn and its soon-to-be-released Friends collection of 14 products, you can deck out your home to look like your favorite Friends haunt, be it Ross’ apartment or Central Perk.

Pottery Barn’s limited edition Friends-inspired collection includes accessories, furniture, textiles and tabletop items, from Central Perk mugs to, yes, Rachel’s Pottery Barn apothecary table. You know, the one Rachel tried to convince Phoebe was an antique in Season 6? The table is so popular, a former executive at Pottery Barn’s parent company Williams-Sonoma, Patrick Connolly, calls it the gift that keeps on giving, CNN reports. “Phones light up with catalog requests every time it airs in syndication,” he says. 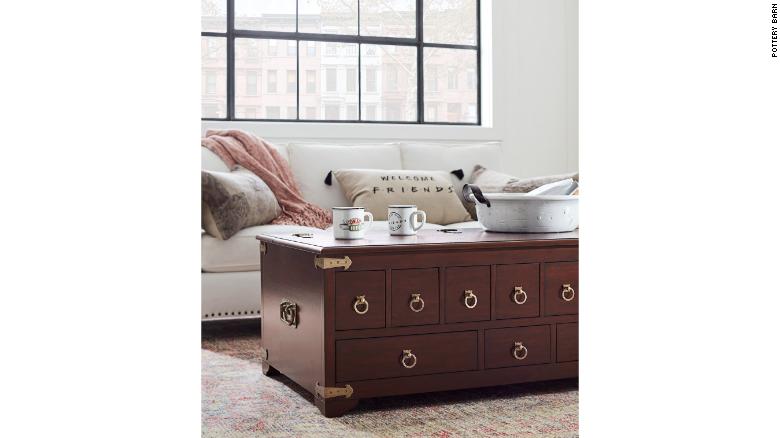 According to POPSUGAR, the Friends collection ranges in price from $13 to $1,099, and Pottery Barn’s website states the items will be available in Pottery Barn stores starting July 30.

Leading up to the collection launch, Pottery Barn is also holding a contest where one lucky winner will receive a $1,000 shopping spree at Pottery Barn, as well as a trip to Los Angeles for the five-hour Warner Bros. Studio Deluxe Tour, which includes a visit to the Central Park set. Enter by September 30 on Pottery Barn’s website.

This isn’t the first time we’re seeing a pop culture Pottery Barn collection, either. Previously, the home furnishing and home décor retailer released a Harry Potter collection. And last month, Ikea re-created Monica Gellar’s living room using its own products, so customer’s can do the same in their own respective homes. The Swedish retailer also reimagined The Simpsons living room and the Stranger Things living room.

Maybe if we decorate our houses to look like the show, we’ll cope a little better when we can’t binge episode after episode on Netflix anymore.