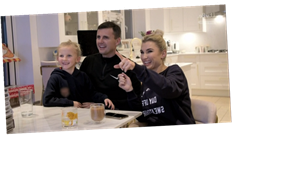 Want the most up-to-date celebrity exclusives sent straight to your inbox every day? Sign up now and join the club!

Billie Faiers and Greg Shepherd have been given the first glimpse of their lavish interior plans for their £1.4million Essex mansion following months of planning setbacks.

The Mummy Diaries stars saw their visions come to life through artist impressions in Wednesday’s episode of the ITVBe show.

And mum-of-two Billie was left red-faced after designer Brad revealed plans for a games room that included throwback snaps of the former TOWIE star in black lingerie on the wall.

In the episode, Billie and Greg were sitting with six-year-old daughter Nelly in their current kitchen as Brad took them through the renderings of their home.

It comes as construction on the property finally got underway on the house last month – a year after the couple got the keys to their “dream family home”.

Billie was left in awe of the sleek kitchen design which flowed beautifully into a living space for the family to entertain and gasped “wow” as Brad clicked the presentation on.

The gorgeous design featured huge floor-to-ceiling windows to flood the room with natural light and skylights to open up the space.

We can also see a seating area in the bay window which was decked with cushions to look out onto the sprawling garden.

Taking a closer look, a large kitchen island with a white marble top was the focal point of the room and seated four high stools to create a breakfast bar.

The living area featured a huge white rug to add a cosy feel with large grey sofas and a coffee table in the centre.

We can see that a large TV is mounted on the wall and spotlights throughout the open-plan space will create the perfect lighting.

Greg revealed how Nelly is “really excited” to see the plans as Billie added: “It’s so nice for the kids to be involved in this whole process with us.”

Billie, who is also mum to Arthur, three, asked Nelly: “How do you feel when you see that?”

But the six-year-old had some feedback from Brad, adding: “It feels good but I do not want a plastic flower and a big cover over the sofa.”

Greg joked: “Yeah, we're not going to have plastic covers over the sofas Brad please.”

“I know at this stage it’s all very basic but it’s just good to get an idea of the space, the layout. It’s sort of all making it feel more real,” Billie said.

Brad also revealed a sneak peek into a cosy living space which had a neutral design with a traditional fireplace and two matching sofas.

The walls featured gorgeous wall mounts to add texture to the space with lanterns to add a golden hue.

And Greg could not wait for Brad to see Billie’s reaction to the games room which featured throwback snaps of Billie in black lingerie on huge canvases.

Dad-of-two Greg said: “Show us some more Bradders let’s see what you’ve got!”

Bradley said: “So Billie I know that you’ve had a lot of say on the kitchen, I put a rough design together for a games room."

Greg added: “Saved the best until last! Come on then Brad let’s see the games room this is what I have been waiting for…”

And while Nelly and her dad erupted in fits of laughter, Billie put her head in her hands as an old photo of Billie from her lads' mag days made an appearance in the room.

The games room also saw a huge pool table with a bar area to entertain guests.

Greg cheekily added: “That’s exactly how I want it Brad!”