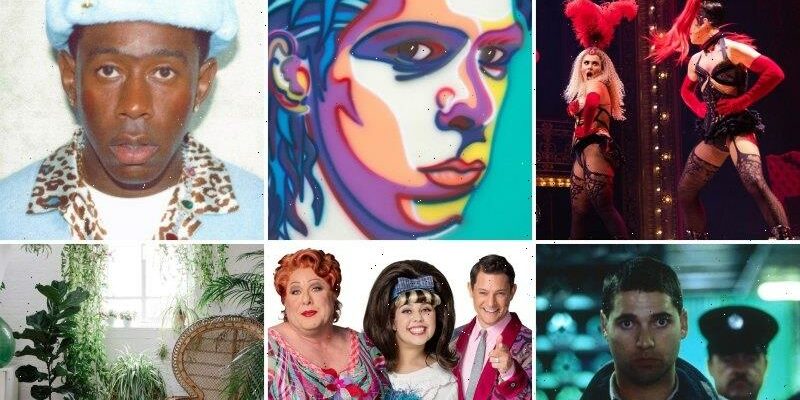 Now that we’re joyously flicking through the 70th Melbourne International Film Festival program, the dream of joining friends in the city – or simply going to the cinema alone – is becoming reality.

Of course, it’s not only MIFF that helps usher in August and those final, chilly weeks of winter. It’s also a terrific time to jump off the couch and take in a live stage show or a gig. Why not go all the way, put on the face paint and see Kiss strutting their stuff – it might be the last time you’ll have that chance.

The Wool Mill, Brunswick East | August 21 | Tickets from $9
Melbourne’s debut houseplant festival, based upon London’s popular version, is a chance to learn, shop and to create a beautiful environment at home. Discover everything from how to care for tropical monstera plants to the secrets of potting mix. Why wait for spring to exercise your green thumb? Children under 12 admitted free. 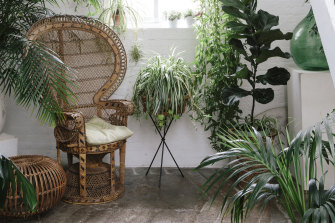 The Melbourne Houseplant Festival is on Sunday, August 21, at The Wool Mill in Brunswick East.Credit:

Various locations | August 4 – 28 | Tickets here
MIFF is back with a milestone celebration and, for many, the simple joy of sharing the sights, sounds and delicious food on offer in the heart of the city. The 70th MIFF program is overflowing with premiere showcases, international features and special anniversary events in the festival’s first in-cinema Melbourne schedule since 2019. The cinema program runs from August 4-21; the online program from August 11-28. 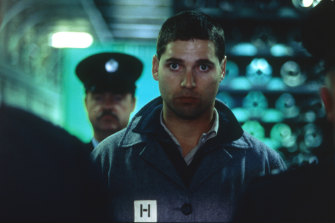 Andrew Dominik’s 2000 film Chopper will screen with a live score as part of the 70th Melbourne International Film Festival.Credit:

Queen Victoria Market | Wednesdays until August 31 | Free
Wednesday evenings in Melbourne mean one thing: The Winter Night Market. A staple in the Melbourne winter calendar, it features over 35 street food traders, a bustle of artisanal stalls and entertainers, and even a silent disco. 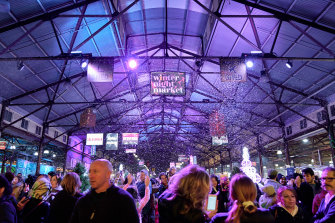 The Crowd and I

Hamer Hall | August 7 and 8 | Tickets from $59
Richard Tognetti directs the Australian Chamber Orchestra live on stage alongside striking imagery and footage captured from across the globe, including at vast refugee camps, epic gatherings in the name of religion, and secular festivals where hedonism rules.

Southbank Theatre | August 6 – September 10 | Tickets from $97
Alice Pung’s award-winning book has been adapted for the stage by writer and comedian Diana Nguyen and director Petra Kalive. Set in the 1990s, Laurinda’s schoolyard setting is a powerful and feisty new work for the Melbourne Theatre Company.

State Theatre | August 10 | Tickets $79.90
With their soulful vocals at the fore, Melbourne duo Vika and Linda Bull bring songs from their new album The Wait to the ornate State Theatre. Songwriting credits on The Wait include Don Walker, Bernard Fanning, Kasey Chambers, Ben Salter, Paul Kelly, Mick Thomas and Jemma Rowlands among others, but it’s the Bull sisters that will bring this night to life.

Regent Theatre | From August 20 | Tickets from $69
Baz Luhrmann’s revolutionary film comes to life onstage, remixed in this musical mash-up extravaganza featuring over 70 songs. After a sold-out premiere season in Melbourne, the dazzling show returns to the Regent Theatre, until September 17. 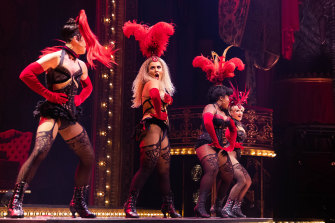 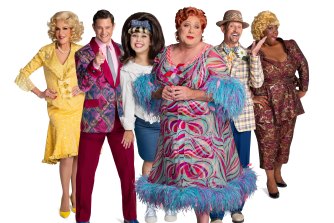 The cast of Hairspray the Musical.Credit:

Her Majesty’s Theatre | Until October 2 | Tickets from $79
The ubiquitous Tony-, Grammy- and Pulitzer Prize-winning musical tells the story of American founding father Alexander Hamilton. The sung-and-rapped musical pulls its sound from a blend of hip-hop, jazz, R&B and Broadway.

Comedy Theatre | Until August 21 | Tickets from $69
Six is a high octane musical that reimagines the “her-story” of the six wives of Henry VIII through a 21st century lens of modern gender politics and pop culture. Winner of two Tony Awards, including best original score, and with over 450 million Spotify streams, it runs until August 21. 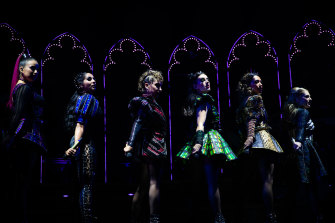 Who Are You: Australian Portraiture

The Ian Potter Centre: NGV | Until August 21| Free
Featuring more than 200 works by Australian artists, including Patricia Piccinini, Atong Atem, Howard Arkley, Vincent Namatjira and Tracey Moffatt, this exhibition brings together – for the first time – works from the NGV and the National Portrait Gallery, Canberra. 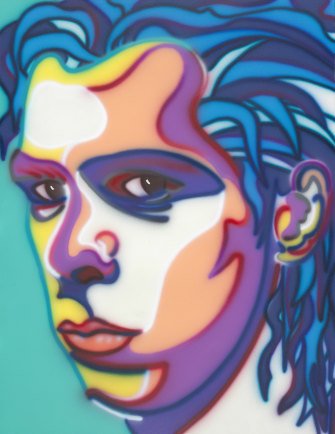 A portrait of Nick Cave by Howard Arkley is among the works now on display at The Ian Potter Centre.Credit:National Portrait Gallery

NGV | Until October 9 | Tickets from $8
Tracking the career of Pablo Picasso, The Picasso Century features over 80 works from the artist himself, as well as over 100 works of the artists, poets and intellectuals he interacted with during the 20th century. Created exclusively for the NGV by the Centre Pompidou and Musee National Picasso-Paris, this exhibition is a must for history and art lovers alike. 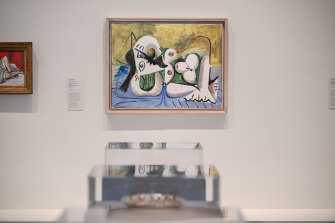 Tyama: A Deeper Sense of Knowing

ACMI | Until November 13 | Tickets from $25
Curated by Tate in the UK, Light: Works from Tate’s Collection celebrates groundbreaking moments from over 200 years of art history, via mediums including painting, photography, sculpture, drawing, installation and the moving image.

The Curtin | August 4 | Tickets $49.05
Singer, songwriter and guitarist with Grinspoon, Jamieson has just released his debut solo album Somebody Else on vinyl, CD and digital. Supporting Jamieson on a run of solo shows, including this night at the Curtin bandroom in Carlton, will be The Pictures, led by Davey Lane.

Rod Laver Arena | August 2 and 3 | Tickets from $109.90
American rapper and producer Tyler, the Creator, lifted the spirits of soggy festivalgoers in Byron Bay on the closing night of Splendour in the Grass. In the decade since his debut Goblin, there have been five more albums, including last year’s genre-spanning, Billboard chart-topping Call Me If You Get Lost, featuring an eye-popping cast of guest performers. 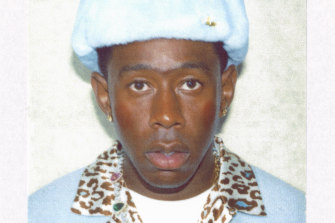 Tyler, the Creator, is at Rod Laver Arena for two nights in August.Credit:

The Croxton | August 12 | Tickets $50.50
The confusing, often frustrating and dispiriting past couple of years have been captured better than most by Melbourne’s own TFS, on their most recent album Deep States. Fresh from a hugely successful tour of the UK, the group is ready to blow the roof off The Croxton with a mighty mix of ferocious noise rock, hip hop and sheer passion.

Rod Laver Arena | August 20, 21 and 23 | Tickets from $99.90
For anyone who remembers when Kiss played at Waverley in 1980, but wasn’t allowed to go because they were too young (yes, I’m speaking from experience), this End of the Road tour is a big deal – the band says these shows will be their last in Melbourne. Rock and roll all night.

Margaret Court Arena | August 13 | Tickets from $99.90
Five years since they were last here, Icelandic band Sigur Ros return with new music and a set-list comprising songs from across their 25-year career. 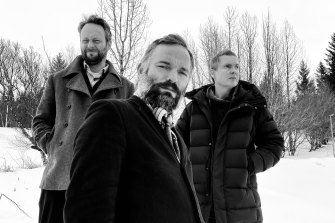 Sigur Ros will play their first shows in Melbourne in five years.Credit:

Harry Potter and the Cursed Child

Princess Theatre | Until October 16 | Tickets from $75
The new version of Harry Potter and the Cursed Child condenses into a single sitting an enthralling theatre epic originally staged in two parts. It follows a brand-new generation of witches and wizards, 19 years after Harry, Ron, and Hermione saved the wizarding world. 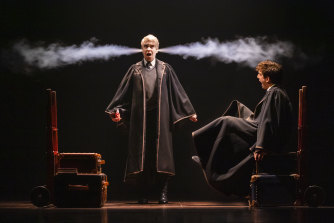 Harry Potter and the Cursed Child is at the Princess Theatre until October 16.Credit:Daniel Boud

Cinema Nova | August 17 | Tickets $35
British crime writer Ann Cleeves has written more than 35 critically acclaimed novels, and in 2017 was awarded the highest accolade in crime writing, the CWA Diamond Dagger. The author will be in conversation with Karina Kilmore about her latest novel, The Rising Tide staring Vera Stanhope.

Melbourne Museum | Until November 19 | Tickets from $10
Melbourne Museum keeping the doors open until 9pm on select Saturday nights, inviting you to curate your very own night at the museum with DJ sets, a pop-up bar, immersive digital experiences, curator talks and access to their exhibitions. Check the website for sessions and more information. Student/concession holders and children under 16 admitted free.