More Qantas flights will be sent overseas to collect stranded Australians after Tasmania has committed to creating hundreds of hotel quarantine places.

The state – which has not been quarantining any returning Australians up until now – has indicated it will increase the nation’s hotel quarantine capacity by 450. 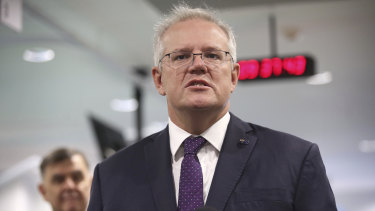 Scott Morrison announced the plan to take hundreds of more Australians in Hobart on Saturday.Credit:James Alcock

The additional capacity is on top of the 6315 weekly quarantine spaces currently agreed to by states and territories.

The Tasmanian government still needs to confirm contracts with hotels, which would then allow the Department of Foreign Affairs and Trade and Qantas to arrange flights from overseas to Hobart.

As of last month, more than 29,000 Australians had registered with DFAT as wanting to return to Australia after a cap on international arrivals created significant capacity problems.

Under a deal struck last month with the Northern Territory government, thousands of Australians who are stranded overseas are being returned over the next six months in an expanded rescue scheme using new Qantas flights and the Howard Springs workers’ camp near Darwin.

Mr Morrison said the government was also talking with other states about increasing quarantine spaces.

"We’re working every option to help as many Australians return home as quickly as possible," Mr Morrison said.

"We thank Premier Gutwein and his government for their willingness to help us tackle the challenges our friends and family are facing overseas amidst the pandemic."

Mr Gutwein said Tasmania was pleased to support the national effort to help Australians in need, saying the state "will never turn its back on its fellow Australians".

"As I have said for some time, we stand ready to play our role to help bring Australians home," he said.

"This is being achieved in a COVID-safe way for returning Australians and Tasmanians, with all inbound passengers required to be tested prior to travel, and will need to return a negative COVID-19 test on or after day 10 of their quarantine period before entering our community.

"This deal also means supporting our hotel industry which has seen a significant downturn in bookings this year."

Foreign Minister Marise Payne said DFAT officials would work with Qantas to ensure the most vulnerable Australians registered are given priority access to the flights.

"Our focus is on helping Australians who want and need to return," she said.

"More than 411,000 Australians have returned since 13 March and around 30,600 have been assisted by the Australian Government including on 66 directly facilitated flights."