Check out what’s clicking on FoxBusiness.com

The National Toy Hall of Fame's new honorees include an object dating to ancient times, a line of muscle-bound action figures and an iconic art set whose medium is colorful pegs. The hall on Thursday announced the top, Masters of the Universe and Lite-Brite as this year's inductees.

The trio was chosen from a field of 12 finalists that also included bingo, Breyer Horses, Catan, Nerf, the piñata, Phase 10, Pound Puppies, Rack-O and Spirograph.

The Toy Hall of Fame inducts a new class of toys each year in a ceremony at The Strong National Museum of Play in Rochester, where the hall is housed.

CABBAGE PATCH KIDS TO TICKLE ME ELMO: THE CHRISTMAS TOY GIFTS THAT MADE PARENTS SCRAMBLE

The top earned a place by being a childhood staple of cultures in Asia, Europe, the Americas, and Australia, according to the hall, which noted that ancient Greek pottery shows people playing with the twirling objects more than 2,000 years ago.

"The top is one of the oldest toys and an integral part of many cultures, where it developed independently as a plaything," Chief Curator Christopher Bensch said in a news release. "With more than 5,000 years of history behind it, it’s about time that the top spun its way into the National Toy Hall of Fame!" 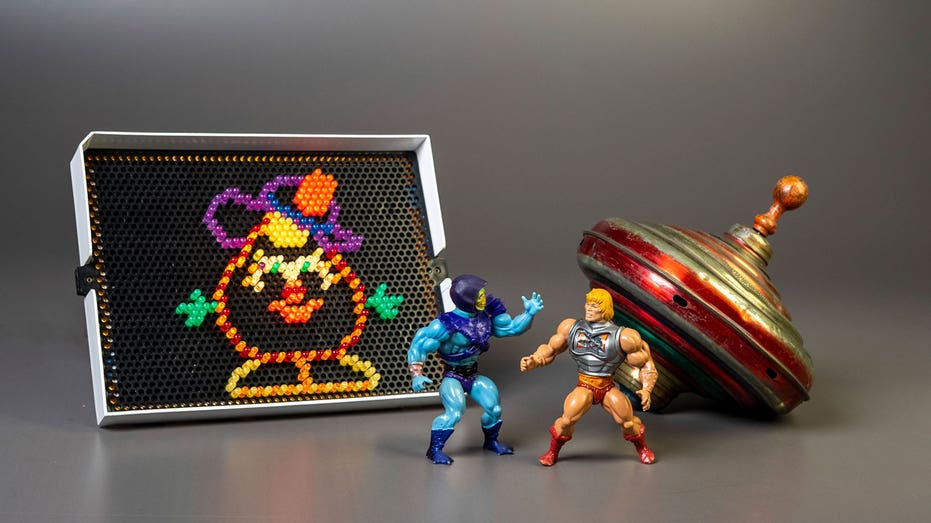 The 2022 inductees to the National Toy Hall of Fame, which were revealed Thursday. (Courtesy of The Strong Museum via AP / AP Images)

The hall recognizes toys that have inspired creativity and endured over time.

Hasbro’s Lite-Brite has maintained its popularity for more than 50 years, after being introduced 1966. Marketed in 1968 as a "magic light box," the toy encourages kids to create glowing pictures by pushing colorful pegs into an illuminated black background.

"The team at Mattel understood that kids spend lots of time in fantasy play and like the opportunity to project themselves into the role of the hero," curator Michelle Parnett-Dwyer said. "Masters of the Universe characters had the strength, weapons, and power to defeat the villain—and give kids confidence."

The honor comes as Mattel marks the 40th anniversary of the franchise, which includes action figures like He-Man and Skeletor, movies and video games, said PJ Lewis, the toymaker's vice president and global head of action figures.

ADULTS ARE BUYING THESE TOYS FOR THEMSELVES, NOT THEIR KIDS: TOY TRENDS SPECIALIST

"We can’t think of a better way to commemorate this historic milestone for Masters of the Universe than being inducted into the National Toy Hall of Fame," Lewis said in a statement.

The new inductees will be displayed alongside past honorees that range from everyday objects like the stick and cardboard box to technologic entries like Nintendo's Game Boy. American Girl Dolls, Risk and sand were inducted last year.

Anyone can nominate a toy. A panel of experts votes in the winners.

The Strong museum also houses the World Video Game Hall of Fame, the Brian Sutton-Smith Library and Archives of Play, the Woodbury School, and the American Journal of Play.