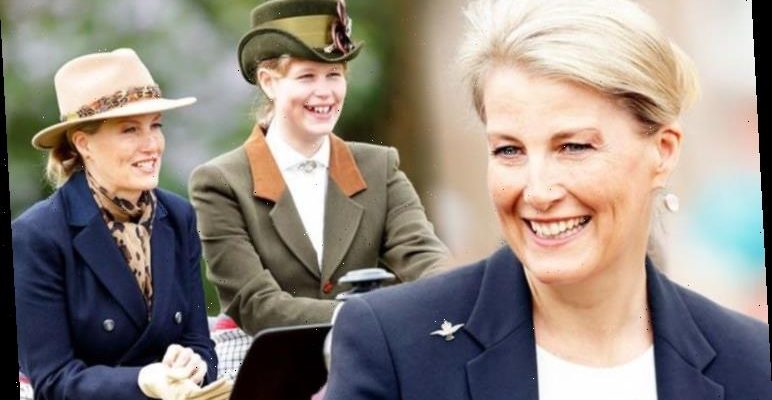 Sophie, Countess of Wessex, 36, joined the Royal Family when she married Prince Edward, also 36. The couple wed at Windsor Castle on June 19, 1999 and have since had two children together.

Lady Louise Windsor was born on November 8, 2003, and the Wessexes welcomed James, Viscount Severn on December 17, 2007.

The royals are the grandchildren of Queen Elizabeth II and both their parents are working members of the family.

Despite their regal roots, Sophie and Prince Edward have spoken about giving their children as normal a life as possible.

Speaking last year, the Countess explained they attended a “regular” school and would spend weekends doing the same things as others their age.

This may be why Lady Louise and James are not often seen out in public.

When they have stepped out as a family, body language expert Judi James commented on their relationship.

She suggested there are some key similarities between Lady Louise and her mother.

During this outing, Louise seemed to take on an authoritative role as she mucked in and watched over her family.

Judi continued: “[She was either] working with her father to pick up the rubbish or keeping her eye on her brother while he gets on with the job.”

This is something she may have taken from her mother, as Sophie’s body language has suggested she is often happy to take the lead when with her husband.

The expert added: “Edward’s non-verbal signals suggest he has happily moved into a more low-key role in public, while Sophie’s confidence signals show her as being the more socially active one in the team dynamic.”

Louise may have some things in common with Sophie, but James seems to have taken after his father.

Judi said: “When the two women stand together then lean in towards one another subtly, mirroring their poses to suggest like-minded thinking.

“James clearly likes playing pranks on his sister, which could mean he’s inherited the Windsor sense of humour from his father.”

When Louise and James were born, they were not given official HRH titles.

Because of this, their lives have been more private than others in their family.

Judi suggested the children appeared shy which could be a result of being in the public eye less often.

She continued: “Louise and James bear some signals of shyness although they both look absorbed when the rubbish-picking starts.”