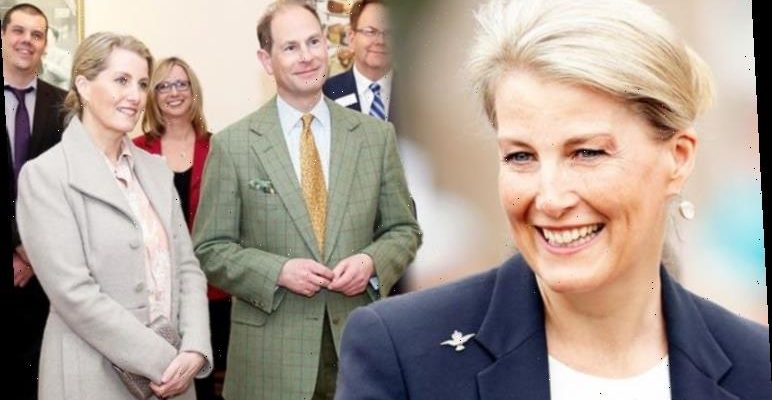 Sophie, Countess of Wessex and Prince Edward are working members of the Royal Family. While in this role, an expert claimed the royal has used her speech to “add drama” to appearances.

Sophie became a member of the Royal Family more than 20 years ago following her wedding to Prince Edward.

Before they were married, Sophie managed to keep a low profile and mostly avoid the public eye.

Since then, however, has made various appearances and speeches in her official role and is often considered a close ally of the Queen.

Previously working in public relations, the royal already had experience with public speaking.

Speaking to Express.co.uk, body language expert Judi James suggested Sophie may have taken techniques from her previous career into her royal role.

When making speeches in the Royal Family, the Countess will use techniques to “add drama”.

The expert explained this was obvious during an appearance last year, and before the coronavirus lockdown.

She told Express.co.uk: “Sophie’s background was in media and she can deliver a mean corporate speaking style.

“[During the appearances] she began in an understated style before going what she called ‘off piste’.

“She swapped the script for some direct ad-libs and stories and added drama and humour.

“The warmth was still there but her tone also became more hard-hitting as she spoke about gender equality and this time we can see dramatic pauses.”

The expert claimed Sophie has seemed happy to speak authentically rather than rely on a script.

Judi continued: “Sophie used more ‘ums’ as verbal fillers, which could have implied some nervousness at the start, but they were rare enough to add a more natural appeal to her talk, rather than sticking to an unemotional, word-perfect delivery that might have had less impact.”

Sophie has continued to use a personal style when speaking via video during the coronavirus pandemic.

In a recent video call, the Countess of Wessex spoke to key workers and explained her father had received the coronavirus vaccine.

The expert suggested she speaks more personally as she thanks those she is speaking to.

Judi said: “Her raised brows, slightly tilted head and the way that she gently shakes her head from side to side as she speaks signal both gratitude and awe for the front-line medics she is speaking to.

“Her thanks don’t just sound general though, they also become personal as she tells how her own father received his vaccine on her birthday.

“Sophie becomes emphatically personal as she moves from speaking on behalf of the public to speaking as a grateful daughter.

“Sophie openly shares her relief and delight here, tossing her head in a gesture of celebration as she tells the workers she is ‘So happy…’ and widening her eyes as she shares how it is ‘…a huge weight off my mind.’”