Australia's 2020 was marked by a sharp shift from severe heat and drought at the start of the year to the coolest and wettest December since a big La Nina a decade ago.

"It's strange that we almost shrug our shoulders," Andrew Watkins, head of the bureau's climate prediction services, said, adding, "it's a significant record" given 2020 included a La Nina event in the Pacific from September onwards, which tends to drive cooler-than-average conditions.

'The bureau's annual climate statement, released on Friday, showed November was the standout month for heat, smashing previous records. January, February, April, June, August and September were also in the 10 warmest on record for mean temperatures for the respective months.

May was the exception, marking the first month since October 2016 with a national mean temperature that was below average for the month.

Among Australia's capitals, Sydney's average daytime temperature came in at 23.5 degrees, or 1.7 degrees above average. Rainfall of 1551.1 millimetres was the most since 1998, the bureau's senior climatologist Blair Trewin said.

Melbourne's days averaged 19.9 degrees, or the coolest since the main observing site moved to Yarra Park in 2011. Rainfall was 768.8 millimetres, also the most since 2011. 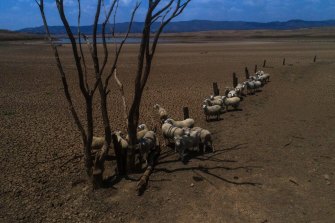 All years since 2013 are now among Australia’s 10 hottest as the background warming from climate change begins to swamp natural variability.Credit:Nick Moir

Australia has warmed 1.44 degrees over the past century with background heating from climate change increasing the odds for ever higher records.

"The climate trend is now starting to dominate the natural variability," Dr Watkins said. La Nina years, for instance, are now warmer than most El Nino years – when conditions favour hotter temperatures – in the past century.

Australia's mean temperatures for the 2011-2020 decade were a third of a degree higher than the previous 10 years. All years since 2013 have also been among the 10 warmest on record, the bureau said.

Annual rainfall levels returned to normal in 2020, coming in at 4 per cent above the 1961-90 benchmark. The key Murray-Darling Basin food bowl recorded 5 per cent better than average rain.

Among the cities, Melbourne and Sydney collected well-above normal rainfall, with 2020 the Harbour City's wettest year since 1998.

"[It's] certainly a contrast from those extreme dry conditions that we had seen in 2019," Lynette Bettio, a bureau climatologist, said. That year was Australia's hottest and driest year on record.

Among the regions with the biggest switch in rainfall was coastal NSW, with some places receiving more than an additional metre of rain in 2020 compared with the previous year.

"Rainfall for the year was below to very much below average for some parts of Australia, including in south-eastern Queensland, the west and south-west of Western Australia, and western Tasmania," the bureau said.

Large long-term rainfall deficits also remain for large areas of Australia's east. "It will take months, maybe years [for the environment] to fully recover from that," Dr Bettio said. 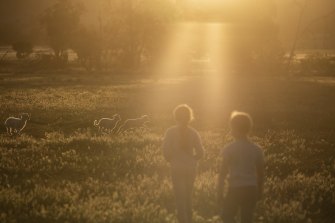 The best rains in years brought relief to many farmers across eastern Australia but long-term deficits remain.Credit:Brook Mitchell/Getty

The main drivers of the climate in 2020 included the La Nina, which recently neared its peak and is expected to break down as autumn approaches, Dr Watkins said.

Weather patterns in the Indian Ocean during late winter and early spring also helped the return of better rains for Australia's east.

The bureau's outlook is for a wetter than usual start to 2021 for most of the eastern states. A reversion to the neutral influences from the oceans around Australia would imply a return to drier times.

"The long-term trend for southern Australia is for a drier than average late autumn and winter period, as we have seen pretty much since the 1990s", Dr Watkins said. 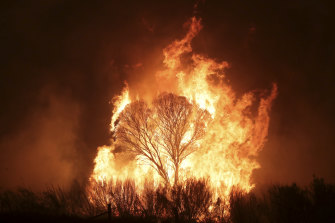 The start of 2020 was marked by record bushfires in eastern Australia, particularly in NSW. With good rains, the main threat in the east at the end of 2020 has been from grassfires although WA has had some major fires of late.Credit:Alex Ellinghausen

Globally, they are running at the third-warmest on records going back to 1854.

Driving the higher temperatures globally has been the rising in greenhouse gases that trap more heat in the earth's atmosphere. The bureau said carbon dioxide levels at the end of 2020 as measured at Cape Grim on Tasmania's west coast were 410.6 parts per million (ppm), an increase of 2.1 ppm for the year. That level is just shy of 50 per cent higher than pre-industrial era levels in 1750.

Dr Watkins said the World Meteorological Organisation has held talks with the bureau and other worldwide agencies about shifting the benchmark period used to compare temperatures from 1961-90 to 1991-2020 to better reflect shifting conditions because of climate change.

"People ask, 'What is the current climate for Melbourne and Sydney?' It doesn't quite work to give them 1961-90" as the yardstick, he said. "It's not what it was the past century."