Senior citizens are slipping ‘n sliding into the summer at their senior living community!

At the Oaks at Northpointe in Zanesville, Ohio, a free-spirited group of residents were surprised with a Slip ‘N Slide for Senior Health and Fitness Day.

In a video from the event, a woman named Millie Uphold is seen sliding down a makeshift Slip ‘N Slide as she is strapped to an inflatable duck.

“Oh, I love it!” she says while people cheer her on.

Uphold was the first to make her way across the slide, which was made from a large roll of plastic.

Afterward, other residents joined in on the fun. Take Tommy Hardwick, is seen in one video grinning from ear to ear as team members at the Oaks pull him down the slide.

The Slip ‘N Slide event, which happened at the beginning of June, drew the attention of many in the surrounding neighborhood — all because of Uphold’s bold request to have a Slip ‘N Slide for Senior Health and Fitness Day.

“She actually wanted to go parasailing,” said Jacqueline Altier, the executive director at the Oaks. “But we thought she meant slip-and-sliding, so that’s why we put it together.”

Altier told “GMA” that Uphold, like the rest of the residents at the Oaks, are always looking for something to do outside.

For Senior Health and Fitness Day, they also had a variety of activities outdoors, such as crafts, limbo and a seek-and-find, which had residents digging through the sand to find different objects. 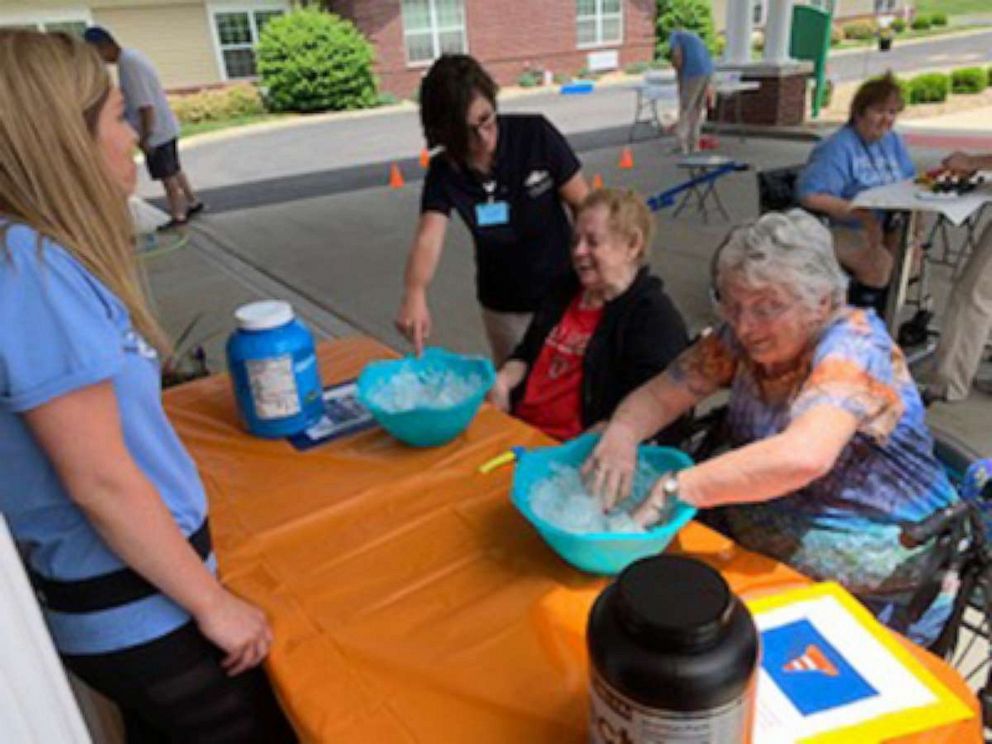 At the very end of the day, when the team at the Oaks rolled out the Slip ‘N Slide, residents couldn’t believe their eyes.

“It was great!” said Oaks resident Eddie White. “For an 80-year-old man, I felt young!”

The team at the Oaks has done similar events in the past with residents. One of the most notable prior to the Slip ‘N Slide was going sledding in February.

“We like to say that we’re a place where family comes to live,” Altier said about the Oaks. “We want to be a part of helping our residents live the absolute best life that they possibly can while they’re in our care.”

The residents had advice for folks in their age group who wanted to be adventurous.

Similarly, Uphold said, “Don’t just sit like a bump on a log — you gotta go do something!”