Samantha Cameron joined her husband David Cameron on This Morning wearing one of her own dress designs.

The Cefinn creator donned a pink leopard print pussy bow midi dress from the collection which retails at £390 on the site and is available in sizes 6-16, as well as alternative blue, green and black colourways.

The former Prime Minister’s wife, 48, spoke fondly of her husband, 52, now they are no longer at No.10 Downing Street, saying with his extra spare time he has become more hands on.

‘He is a very good cook so I am incredibly lucky. He is brilliant with the children,’ she gushed.

Presenter Holly Willoughby jokingly asked if she was happy to keep him around, and Sam laughed in response: ‘Yes he can stay for a while…’ 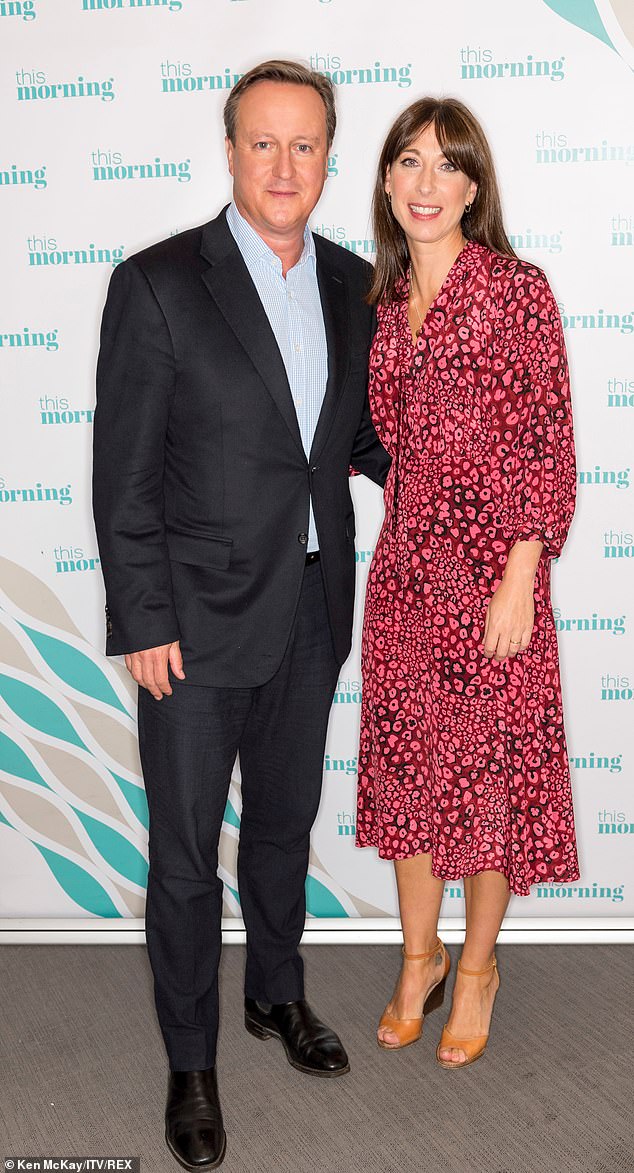 SamCam sported the pink pussy bow design which retails on the site for £390, while discussing life after living at No.10 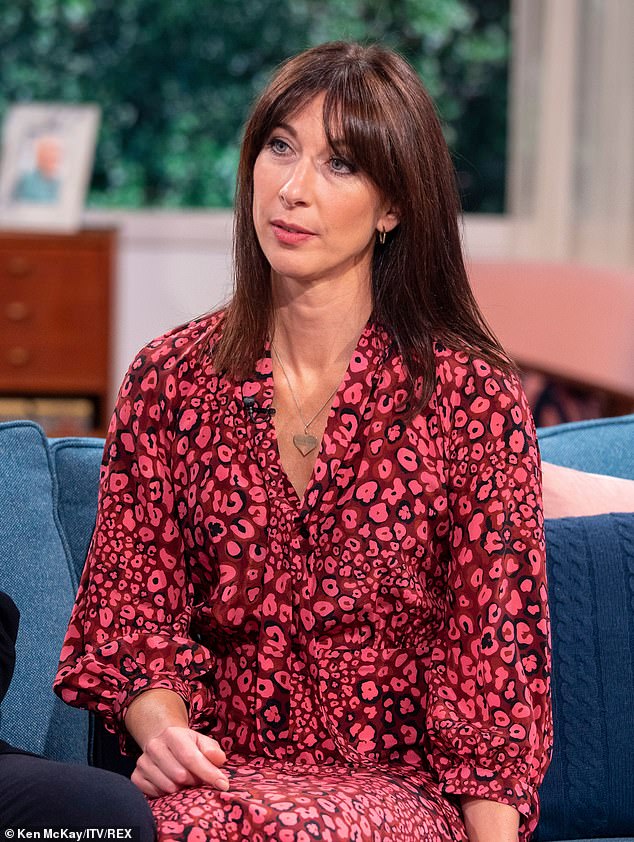 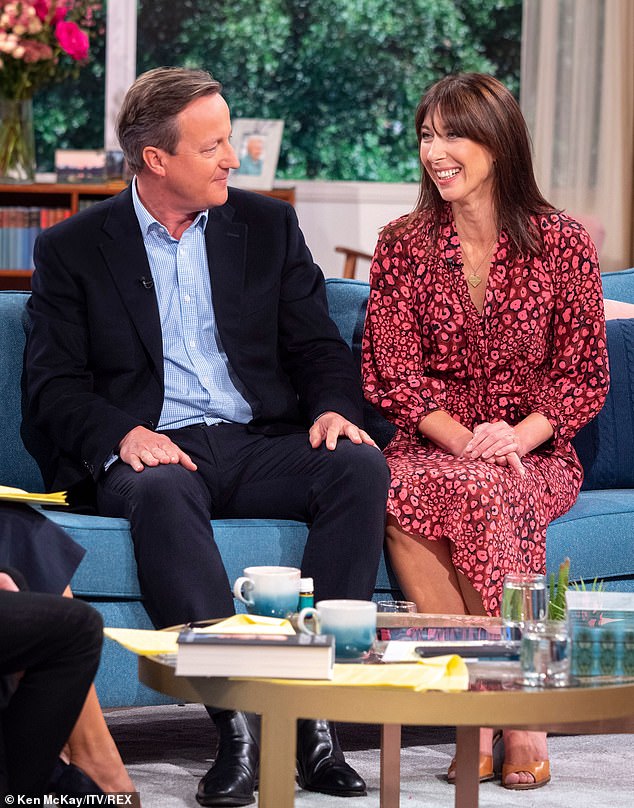 SamCam, is she is affectionately known, is often seen wearing her own line during public appearance and Thursday’s This Morning appearance was no different.

She team the stylishly patterned dress with a pair of tan brown heeled sandals, and complemented the look with matching pink lipstick.

The fashion designer kept her jewellery simple donning a gold necklace with a gold square pendant.

The Camerons were a picture of unity as they spoke about life after living at No.10, with Samantha explaining what really happened when Theresa May walked in on her in the kitchen.

Referring to the former PM’s revelation in his new book For The Record, she said: ‘I was packing up the house and I was dancing round our kitchen, I had a beer and a few rollies… It was the weekend.

‘It was a three day marathon and was packing with friends and then Theresa came around to look at the flat.’ 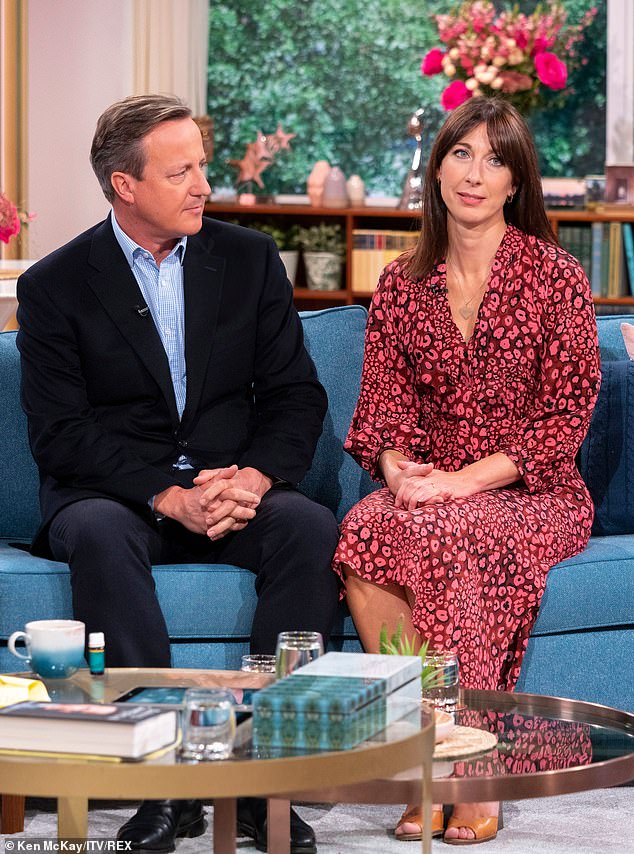 SamCam explained about the revelation Theresa May walked in on her while she was packing up No.10 when she was dancing around the kitchen 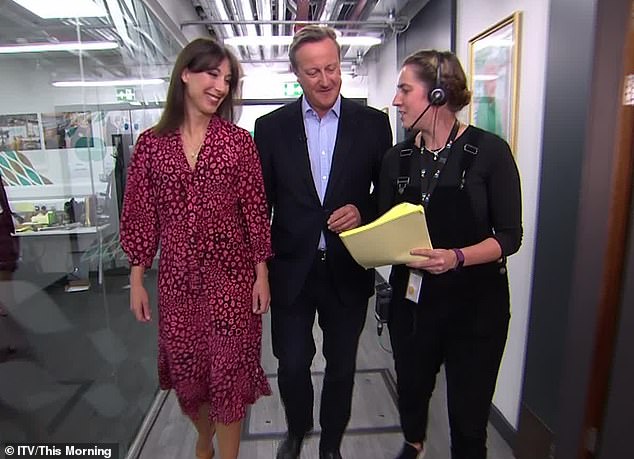 Samantha explained that the Camerons were settling back into their normal life outside of politics.

She said that their three children Nancy, 15, Arther, 13, and Florence, nine, were happy to be near their school friends.

‘I think they were pleased to be going home and be close to their friends.

‘I would like to think that life didn’t change too dramatically… From the moment you move in you know that you are going to one day move out,’ she explained.

Adding that she was always in support of her husband, Sam said: ‘You feel unbelievably protective and defensive but you go into politics as a team and you know you have to take responsibility for whatever happens.

‘We have an incredibly great marriage.’

This Morning airs weekdays on ITV at 10.30am 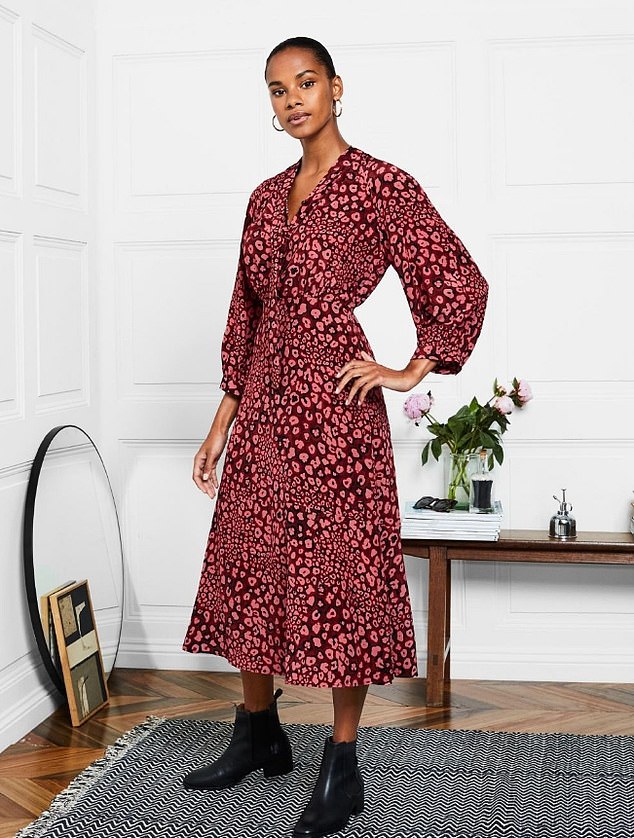 The dress appears on the Cefinn website priced at £390, and is available in sizes 6-16, it’s also available in blue, green and black variations