Teresa Giudice’s boyfriend, Louie Ruelas, made his ‘RHONJ’ reunion debut during the May 26 episode.

Welp, not everyone loves Louie Ruelas as much as Teresa Giudice does. That was made very clear during Part 2 of The Real Housewives of New Jersey reunion special on May 26, when Teresa tearfully admitted that her ex-husband, Joe Giudice, was devastated over her new romance.

The reveal came after host Andy Cohen brought up the fact that Louie and Joe met during a vacation in the Bahamas. He asked how that happened, and Teresa said, “[My daughters] went on their own and then I had to go pick up Audriana because she had to be back at dance on April 5th. And then Louie reached out to Joe and said, ‘Can we have dinner in the Bahamas?’”

Andy then asked if that was weird, but Teresa said it wasn’t. “My kids just said, ‘Mom, make sure there’s not too much [PDA]’ because him and I are all over each other always,” she explained.

But — not everyone felt as good about it as Teresa did. She went on to add, “[Joe] did tell Gia, ‘Seeing your mom with someone else broke my heart into a million pieces’ and I did feel bad and like I said, I’m not trying to hurt him”, before breaking down crying. 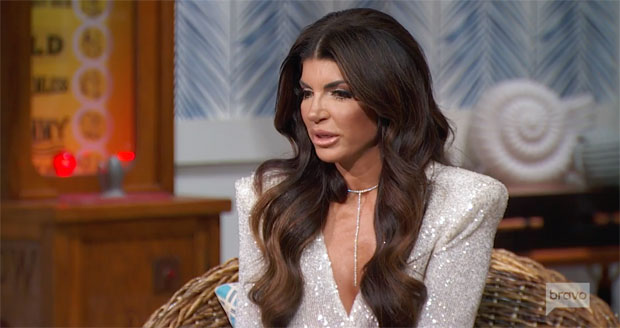 Teresa revealed that daughter Audriana, 12, and Gabriella, 17, “are good” with the divorce, but “Gia and Milania, they still have deep issues about it.” Teresa also said that Gia, 20, has started seeing a therapist about it, and Milania, 15, will soon join her. Meanwhile, Teresa has also started seeing a therapist about how to better help her daughters handle the divorce.

And hopefully, given what Teresa revealed, Joe doesn’t watch tonight’s reunion because in the final few minutes, Louie surprised Teresa and brought her a cocktail on stage. They then hugged and kissed and exchanged “I love yous” before he retreated backstage and hugged all the husbands.

As for the cheating rumor Teresa started about Jackie Goldschneider‘s husband, Evan, they finally buried the hatchet and Teresa even suggested they go on a double date with Evan and Louie. Everyone seemed on board with the idea, so we’ll see how next season plays out.