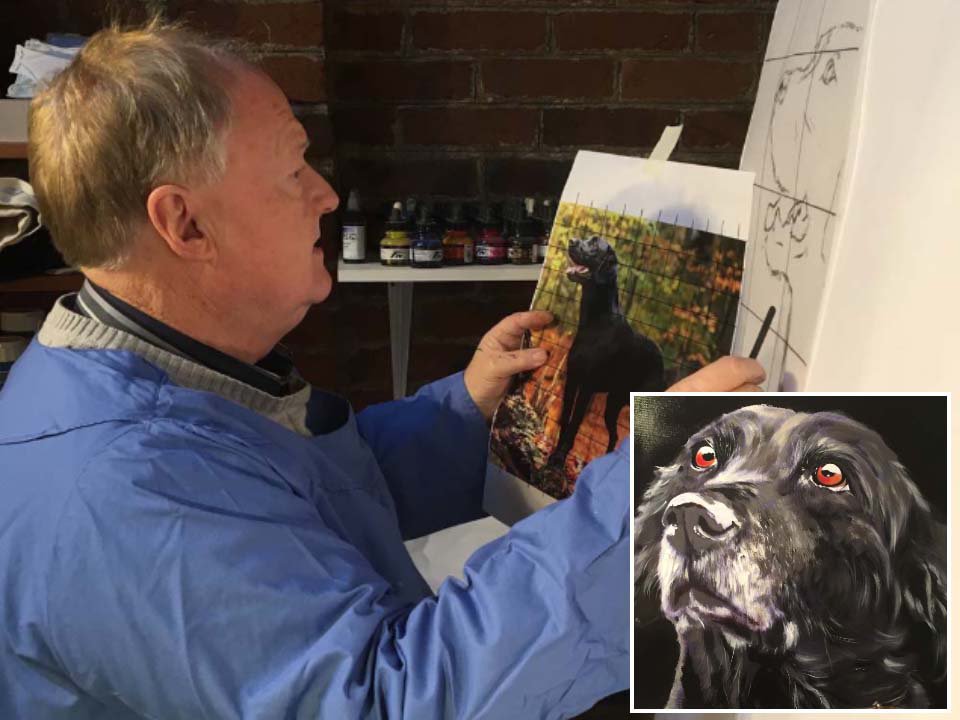 A retired businessman who dropped out of art college for fear his dyslexia would hold him back has embraced his artistic talent and now spends his days painting people’s four-legged friends.

Former advertising company boss Clive Helmsley, 70, has painted over 2,000 portraits of dogs for clients all over the world.

His rags-to-riches story saw him scrape by as a teen to get through art school, and now he regularly charges clients £270 per portrait.

Clive rediscovered his artistic talent quite by chance when his dog nipped the end of a stranger’s finger while out on a walk eight years ago.

By way of an apology, Clive offered to paint the woman’s poodle, and she delightedly showed the portrait off, resulting in Clive being asked to judge a dog photo competition and paint the top three entrants as a prize.

Rather than simply drawing the winner, Clive, of Henley-on-Thames, Oxfordshire, painted all 85 entrants instead.

Afterwards, he sold his businesses and has been painting pooches ever since.

Clive, who has two grown children, three grandchildren, and lives with his wife, Inez, said: ‘My dog paintings started by accident, really.

‘I was out with the two Labradors I had then – Kipling and Humphrey – walking by the Thames.

‘A lady offered Humphrey a biscuit and he got anxious and bit her nail by accident, making it bleed.

‘She was a bit shocked, but I saw that she had a poodle with her, so I offered to paint it for her to say sorry.

‘I didn’t realise dogs were so easy to do and when I gave it to her she burst into tears and started telling people all about it.

‘The next thing, I was being asked to paint the top three dogs in a photo contest.

‘But in the end, I did all 85 dogs that were entered, put the paintings around my house – which is a big Georgian one – and invited all their owners round!’

These days, Clive is regularly commissioned to paint people’s beloved dog and charges his more well-off clients £270 per picture.

He said: ‘Seeing people love my paintings of their dogs now brings me so much pleasure.

‘I do many for free for people and charities and local organisations, but even when I charge better-off people, I don’t ask for much for works that can take 12 hours.’

The first and only other hint Clive had that he had a real talent for portraiture came when he offered to have a go at painting a client’s picture 12 years ago.

Clive said: ‘I always had a magic marker pen in my hand.

‘Then I remember about 12 years ago saying to a client, Stephen Phipson, the Chief Executive of a big firm who had a CBE, “You should get a portrait done with your award.”

‘He said: “You trained as an artist, can’t you do it?” So, I thought I’d have a go. He was thrilled to bits when I finished.’

Clive, whose dyslexia means he has trouble with maths, reading and writing, went to Taunton Art College at 14 for three years, and then Coventry Art College for another three years.

However, he dropped out in his final term at Coventry, aged 20, scared he wouldn’t be able to secure his graphics and industrial design qualification because of his disability.

During his time at Coventry, when he was 17, Clive’s lived as a stereotypical young starving artist.

Back then, he washed dishes and sold ice cream to get by, and slept on a mattress on the floor of a windowless garage, deliberately getting locked in the college art department on Friday nights because it was warm and had showers.

Luckily, Clive’s talent for business saw him forge a career as a self-made successful company owner after he left art school.

He started out as a paste-up artist for an ad agency, followed by a position with Thomson publication New Electronics selling ads for electronics firms, where he did visual sketches for clients.

In 1986, he set up his own business called Billings, where he created adverts for connectors, capacitors, resistors, and power supplies.

When he had made enough money to retire – giving shares in his business to his staff – he found his way back to his love of art.

Clive said: ‘I adore dogs. I’ve got five of my past ones buried in my field and now have another Lab called Bear.

‘Now I want to spend all my time painting and I may branch out into cats, horses and people.

‘After seeing a dog, I can either then paint it from memory or I take a photo to use. I just try to get the eyes right first, as that’s 90 per cent of it.

‘I am quite fast at art, although in maths I still can’t do my times tables. I can do a painting in about 12 hours.’

He’s never short of subjects, and has taken to strolling around his local area with dog treats to hand.

He said: ‘My orders come mainly by word of mouth, although I know many of the local dogs, as I always walk around Henley-on-Thames with biscuits in my pocket for dogs I meet. So many of them know me before I paint them.

‘Nine out of 10 of those I paint are local, but I have sent my work to Hong Kong, America, France and Germany, too.

‘I’m not in it for money. I give about half my dog paintings to charities and the local Sue Ryder homes, hospice, surgery and rugby club.

‘Sometimes they are used for prizes, too and I’ve taken photos of dogs without people knowing and surprised them when I’ve given them the painting.

‘But the better off people I charge £270, which covers the cost of the canvas, paint, postage, and a day’s work, so it’s not that much compared to a plumber.

‘The letters I get back from recipients give me immense pleasure, too.

‘In March, my canvas suppliers in Germany said the painting I sent of a spaniel was my 2,000th dog.

‘For the first 200 I remembered the dogs’ names, the owners’ names and the composition, but after 2,000 you forget.’

A far cry away from his days in the garage, Clive turned turned a stable on his property into a studio three years ago, and want to use it as a place to teach art to disabled and terminally-ill people.

Ever the advertising man, on dry days, Clive also creates a small outdoor gallery of his dog paintings, so they can be spotted by passers-by, some of whom go on to become customers.

Preferring to work with acrylics, oils, pastels and inks, he said: ‘I’ve earned a lot from my two companies but having an old lady cry with joy at her dog painting is worth much more to me.

‘Perhaps I should be thankful for Humphrey nipping that lady by accident – as the painting I gave her has changed my life.

‘And I always joke “a dog painting is for life, not just for Christmas”.’