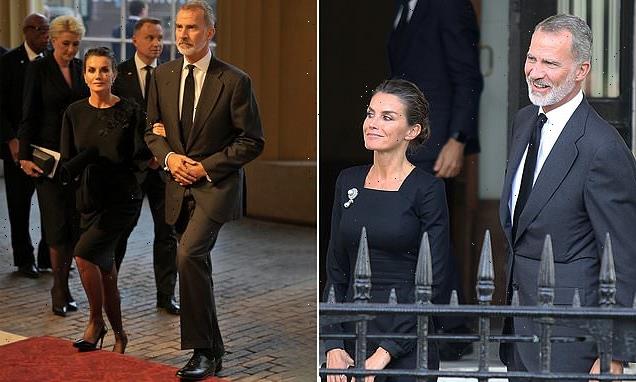 Felipe’s rock: Queen Letizia links arms with solemn-looking King of Spain as they arrive at Buckingham Palace ahead of the funeral of his ‘Aunt Lilibet’

Queen Letizia of Spain was a strong support for her husband King Felipe VI as they arrived at Buckingham Palace this evening ahead of the Queen’s funeral.

King Felipe, who fondly referred to Her late Majesty as ‘Aunt Lilibet’, attended the ‘reception of the century’ at the royal residence after paying tribute to the Queen at Westminster Hall, where she lies in state, earlier today.

The Queen of Spain linked arms with her husband as the royal couple, both dressed in black to symbolise their mourning, prepared to be hosted by King Charles and Queen Consort Camilla. 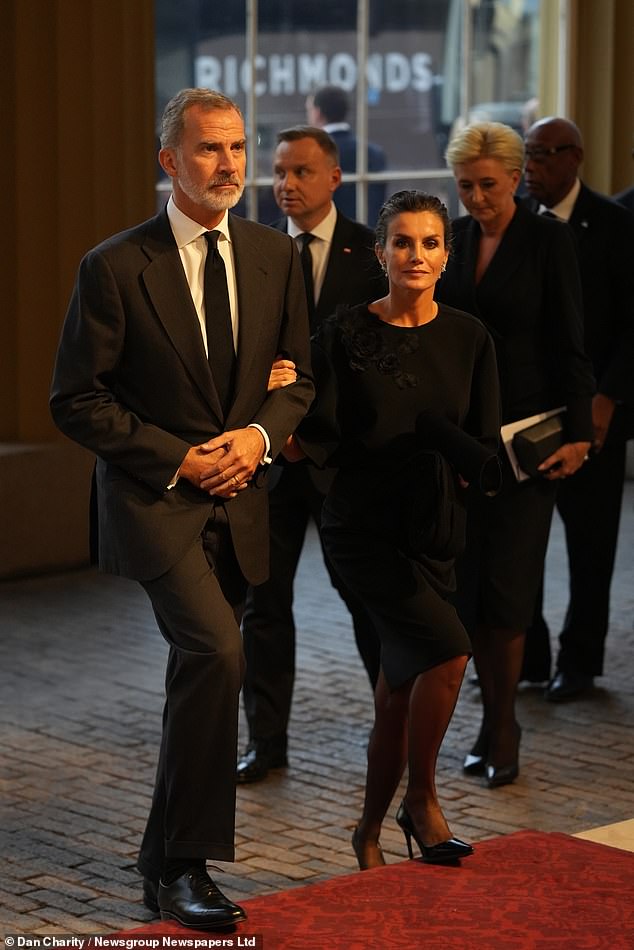 A strong support: Queen Letizia was pictured arm-in-arm with her husband King Felipe VI as they walked into Buckingham Palace following an emotional day in which they paid their respects to Her late Majesty 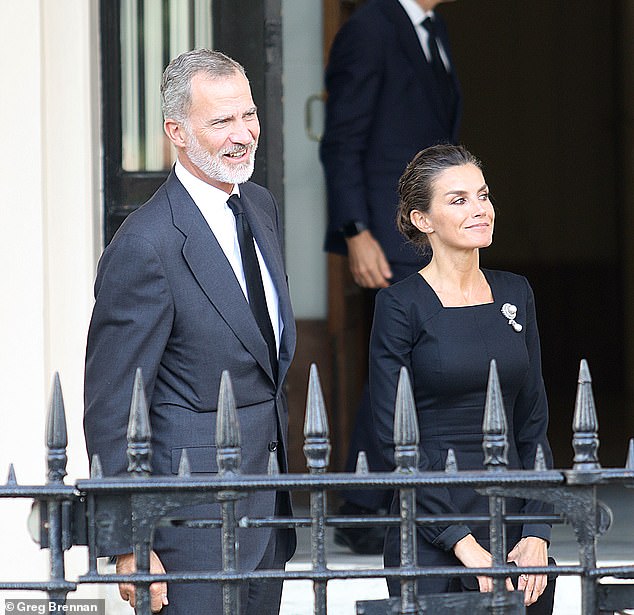 King Felipe and Queen Letizia were pictured outside the Spanish Embassy in London earlier today as they prepared to pay their respects to the Queen at Westminster Hall, where she lies in state

As they paid their respects to the late monarch earlier today, King Felipe and Queen Letizia looked solemn and bowed as they paused to look at her coffin on the catafalque in Westminster Hall.

King Felipe also made the sign of the cross over his chest as he appeared to say a little prayer for the Queen.

Letizia looked dignified and elegant in a black dress with roses on the shoulder and black stilettos, and pinned her hair back in a low bun with neutral make-up.

Following Her Majesty’s passing on 8 September at Balmoral Castle in Aberdeenshire, King Felipe and Queen Letizia posted a heartfelt tribute to ‘Aunt Lilibet’.

In a letter to King Charles posted on the Casa Real Twitter account, King Felipe said he would ‘dearly’ miss his aunt.

He wrote: ‘Your Majesty, dearest Charles, 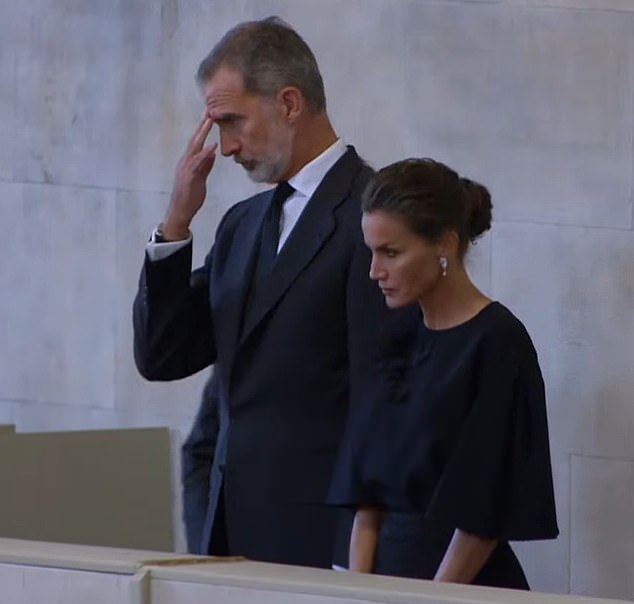 The Spanish King was joined by his wife Queen Letizia. The couple have a good relationship with the British Royal Family 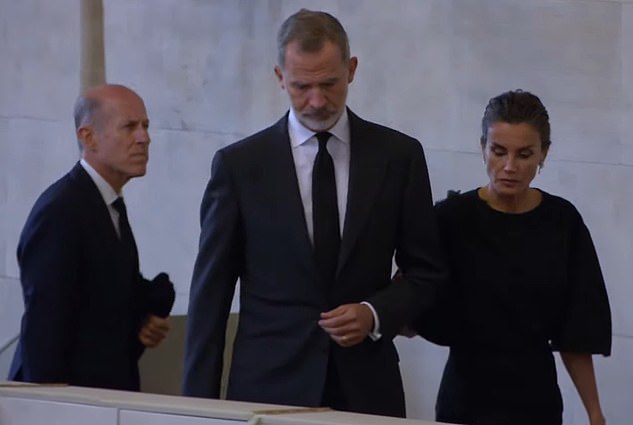 ‘Deeply saddened by the sorrowful news of the passing of Her Majesty Queen Elizabeth II, your beloved mother.

‘I would like to offer Your Majesty and the British people, on my behalf and on the behalf of the Spanish government and people, our most heartfelt condolences.’

He continued: ‘Her Majesty Queen Elizabeth has undoubtedly witnessed, written and shaped many of the most relevant chapters in the history of our world during the last seven decades.

‘Her sense of duty, commitment and a whole life devoted to serving the people of the United Kingdom of Great Britain and Northern Ireland set an example for all of us and will remain as a solid and valuable legacy for future generations.

‘Queen Letizia and I send Your Majesty and the whole family our love and prayers.

‘You are all in our hearts and thoughts. We will miss her dearly.’

The King and Queen of Spain arrived at Buckingham Palace shortly after former King Juan Carlos I, who abdicated in 2014 after his daughter’s husband was embroiled in an elephant hunting scandal.

El Debate reported 84-year-old King Juan Carlos, the late Queen’s cousin, was privately contacted by Spanish government officials a few days ago to ask him not to attend the service.

Nonetheless he was spotted walking into the Palace with other world leaders and royals, accompanied by Queen Sofía.