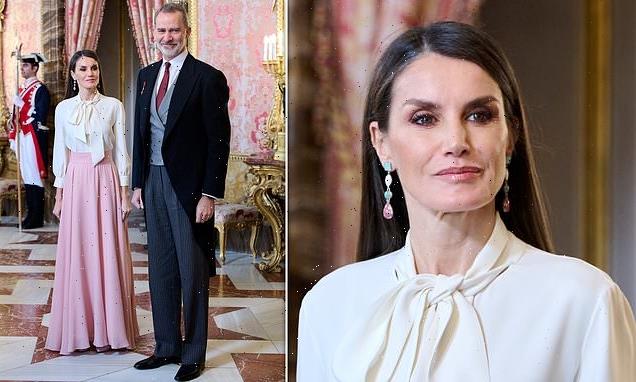 Queen Letizia of Spain put her best foot forward as she welcomed diplomats from around the world to a reception at the Royal Palace in Madrid.

The Queen, 50, flanked her husband, King Felipe IV, at the event, as the pair greeted members of the Diplomatic Corps accredited to Spain.

The King, 54, along with the Queen, offered warm welcomes to dozens of diplomatic delegates and their spouses, and spent almost ten minutes in total shaking hands with them.

The ever-stylish royal wore a flowing powder pink skirt for the occasion, which she paired with a white pussy bow blouse. 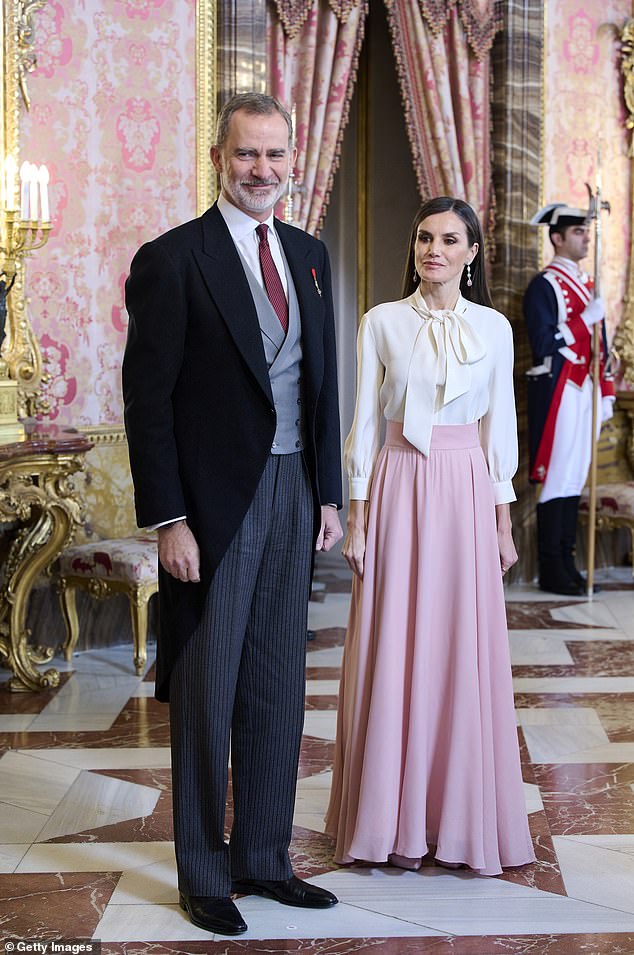 Appearing elegant and composed, Queen Letizia smiled and chatted with ambassadors to Spain from Great Britain and Northern Ireland, Germany, Kenya, and many more states.

She matched the beautiful floor-length skirt with stilettos of the same colour as her skirt.

The mother-of-two glowed as her makeup looked typically flawless with a smokey eye and natural lip. 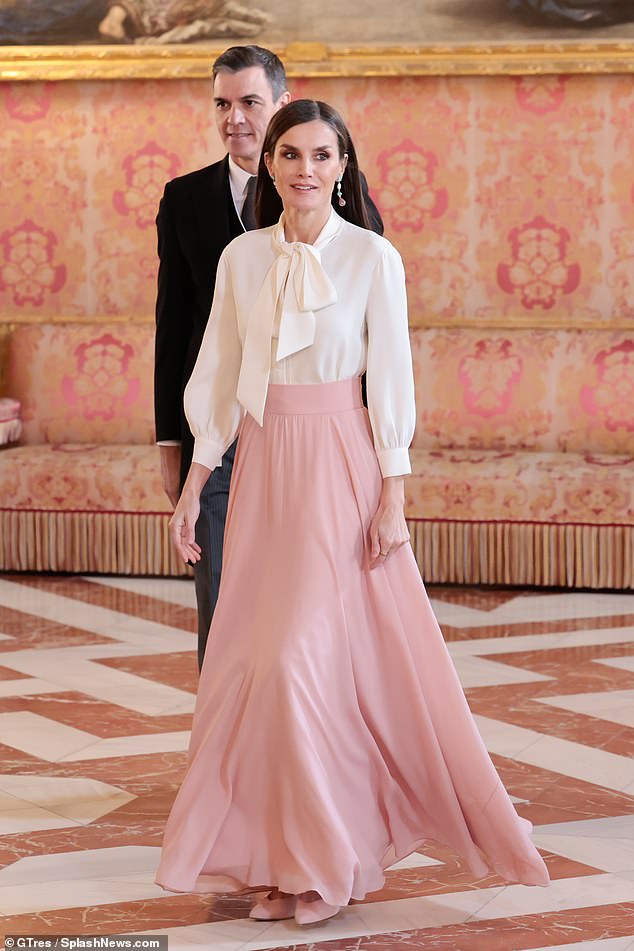 The ever-stylish royal wore a flowing powder pink skirt for the occasion, which she paired with a crisp white blouse 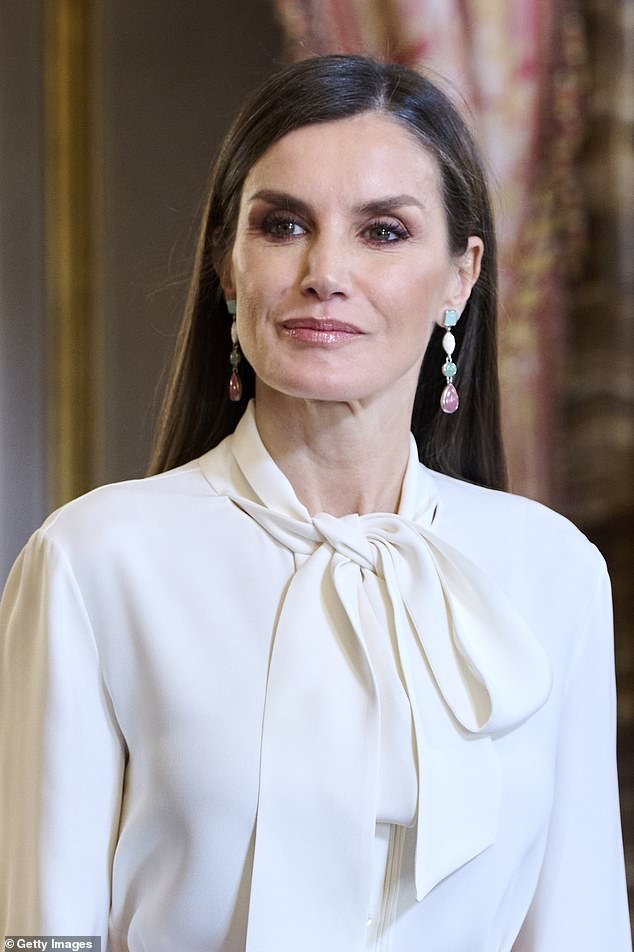 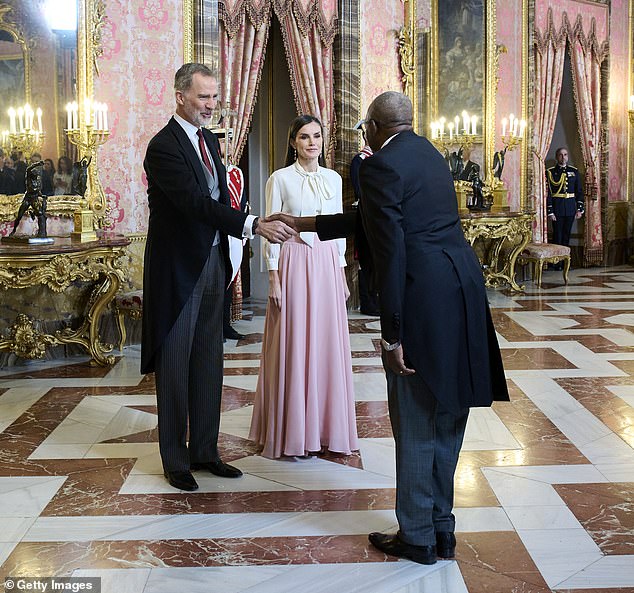 To complete the chic, look her dark brown tresses were pinned back to show off her statement earrings.

The decadent jewellery, comprised of turquoise, white and pink gemstones, also gave a nod to the rosey shade of her outfit.

Meanwhile, the King looked smart in a three-piece tailored suit, which featured a grey waistcoat and matching grey pinstripe trousers. 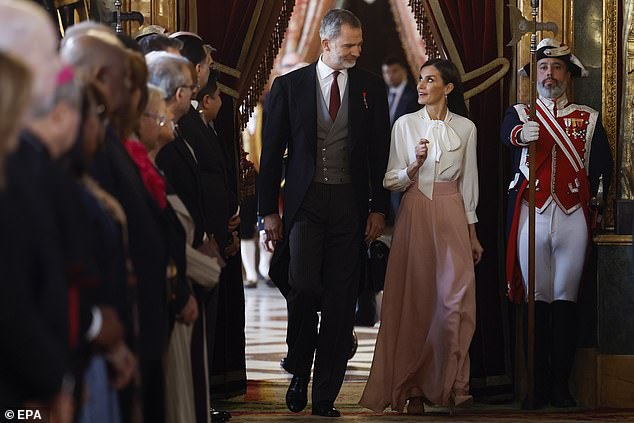 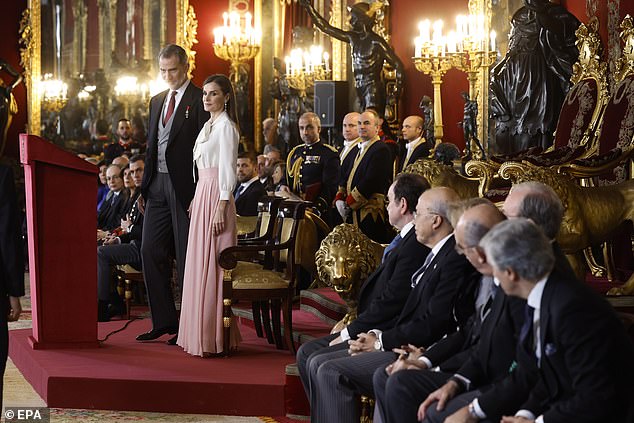 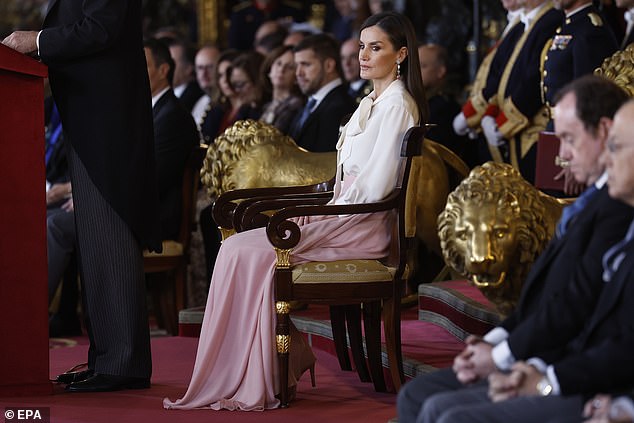 The ruby red tie mirrored the flash of red from his medal, worn on his lapel.

At last year’s event, the couple coordinated their outfits, with Felipe opting for a dusty pink tie to reflect his wife’s pink floral shirt.

As she did this year, glamorous Letizia also wore a two-piece outfit at last year’s gathering of diplomats.

The reception typically takes place in the new year, which the couple has undertaken annually since King Felipe acceded to the throne in 2014. 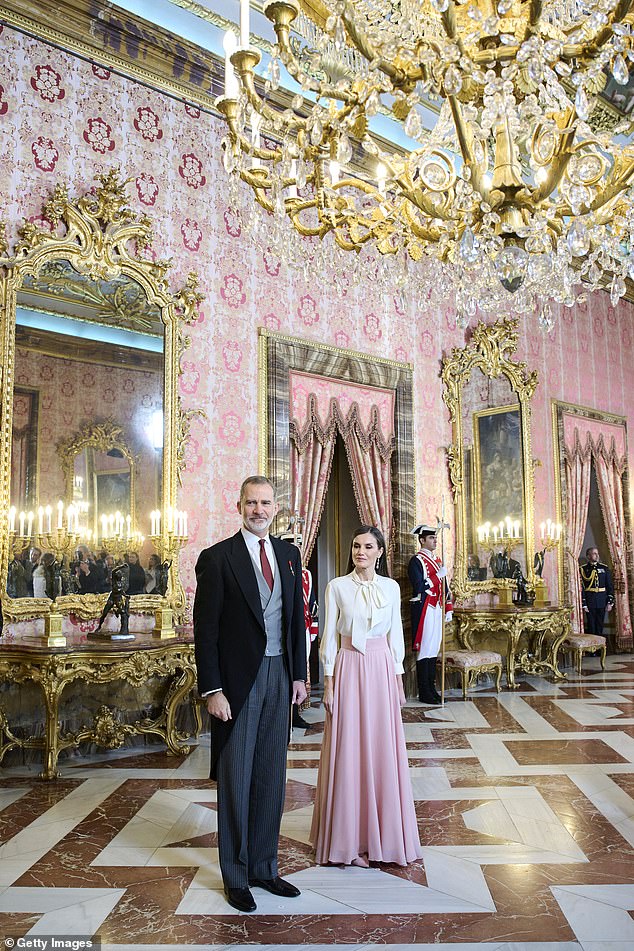 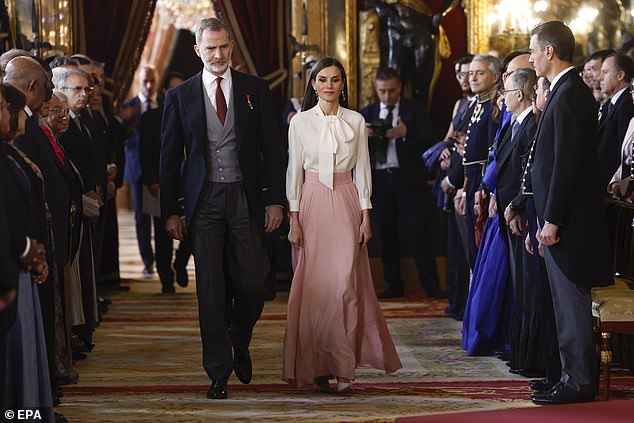 There are a total of 126 embassies and almost consulates-general in Spain, 153 of which are official and more than 600 honorary.

Stunning photos show the royal couple entering a reception room where diplomats were stood in a line waiting for them.

The King and Queen shared a tender moment as they smiled each other, before taking their seats in the centre of the room.

King Felipe went on to make a speech thanking the delegates for coming, discussing Spain’s friendship with countries like the United States and looking to the year ahead.

The Royal Palace of Madrid, where the event took place, is the official residence of the Spanish royal family, but is now almost solely used for state ceremonies.

Felipe and Letizia spend the majority of their time living with their two daughters, Princesses Leonor, 17 and Infanta, 15 in another residence – the relatively more humble Palace of La Zarzuela, on the outskirts of Madrid.