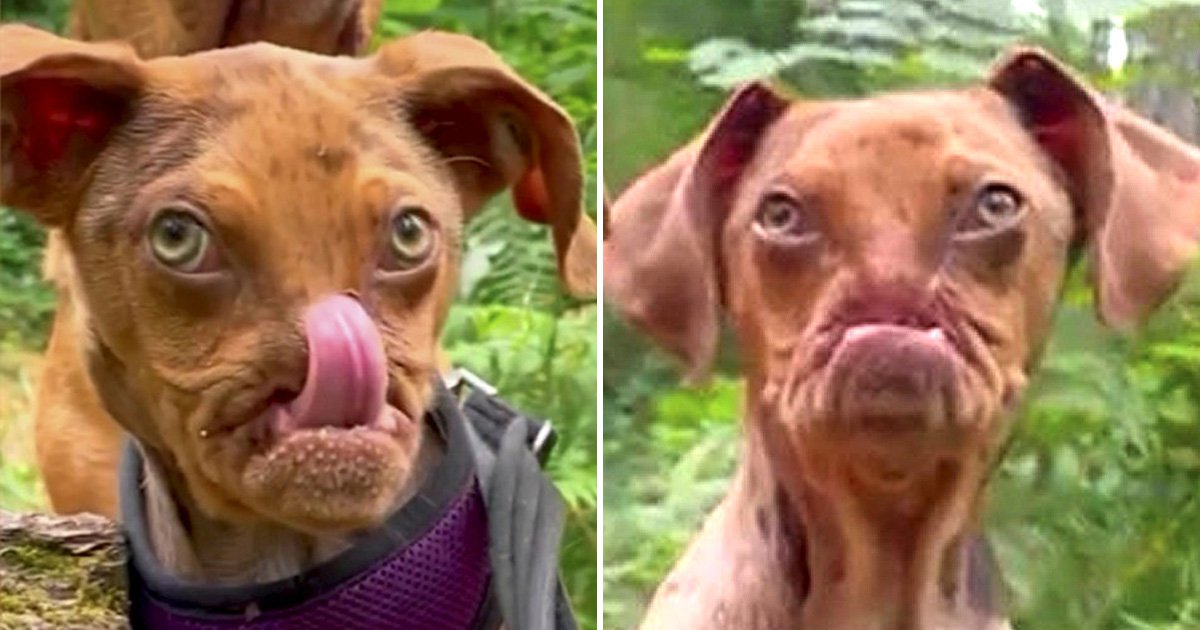 It’s safe to say Newt didn’t have the smoothest of entries into the world.

His mother bit the puppy’s face when he was born, leading him to lose his entire upper snout.

Because of the high cost of Newt’s healthcare, his original owners had to surrender him to the Texas branch of NYBC (New York Bully Crew).

Originally called ‘Brute’’, Liesl adopted the puppy, renamed him Newt and moved him 3,000 miles away to live with her in Eugene, Oregon.

‘Newt was rescued as a tiny puppy,’ Liesl said.

‘I don’t know why the mother dog bit her puppy, it could have been a horrible accident.

‘The owners could not afford vet care so Brute was surrendered to the New York Bully Crew (NYBC) who had rescue partners in Texas where Brute was born.

‘They posted photos and videos of him on their Instagram account. That’s where I first saw him, and I fell in love. I wanted to adopt Newt as a personal dog.’

Despite his shaky start, Newt lives a beautiful and happy life in the loving care of Liesl and his adopted ‘siblings’ Picasso and Wacku.

His injuries eventually healed and left him with a strange but cute face that makes him look like a cross between his amphibious namesake and a grumpy old man.

‘We had him flown to Oregon in July,’ Liesl explained.

‘I was so incredibly happy to finally have him here with us after following his story at NYBC for all those months.

‘I have to hand feed him everything he eats because he has a hard time getting food into his mouth and he also cannot be allowed to eat too much at once or else he will vomit it up.

‘I changed his name from Brute to Newt! A newt is like a salamander and I thought he looked a bit like one.’

Liesl says her and Newt have a special relationship and he is a joy to own and care for.

‘Newt is extremely bonded to me,’ she said. ‘He follows me everywhere and is also very gentle and affectionate. He knows he’s dependent on me for his food and he LOVES his food!

‘Newt is very smart and very playful. I noticed as soon as I got him that despite his lack of an upper mandible he wants to carry everything.’

Newt’s siblings also have disfigurements. Wacku lost his snout and Picasso is described as having a wonky face.

‘Newt fit right into my dog family, and everyone liked him from the beginning,’ Liesl said. ‘He’s very playful and goofy like a normal puppy but also smart and respectful of the other dogs.

‘He and Picasso hit it off right away! Picasso loves to play and he and Newt can chase each other like crazy and wrestle non-stop.

‘I love the “disabled” dogs because they do not know they are any different and they are determined to make the most of what they have.

‘They embrace life and unlike people, do not feel sorry for themselves or think about what they have lost.’

Send us an email at [email protected]