Sydney house prices started to revive in October leaving homeowners thousands of dollars better off but Melbourne was the only capital city across the country recording another decline in values following strict lockdowns to manage the coronavirus pandemic.

With every other capital city across the country recording a bounce back in property prices there is now growth nationally for the first time since April, CoreLogic data released on Monday morning shows. Across the capitals, property prices increased 0.2 per cent, while regional home values surged 0.9 per cent. 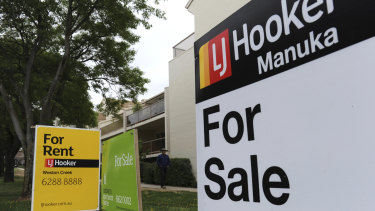 House prices are up nationally for the first time in five months.Credit:Graham Tidy

Sydney house prices increased 0.5 per cent to $993,927 over the month and apartment prices slumped 0.5 per cent to $735,350. Overall median property values jumped 0.1 per cent, marking a turnaround in the fortunes of the city's homeowners.

Melbourne property values dropped 0.2 per cent over the month, led by a 0.3 per cent decline in house prices to $780,574 but offset slightly by a 0.1 per cent increase in apartment prices to $561,881. Despite holding the title of the only city to record falling values over the month, this was the smallest recorded drop in prices since April.

Of the remaining capitals, the top performers were Adelaide and Darwin, where dwelling values jumped 1.2 per cent each. Brisbane increased by 0.5 per cent, narrowly outstripped by Perth at 0.6 per cent. Canberra and Hobart prices increased by 1 per cent.

CoreLogic head of research Tim Lawless said unit values had declined less than houses so far, but this was "likely to change" in the coming months. Overall prices are down nationally by 0.1 per cent over the quarter, but on an annual basis are up 3.9 per cent.

The picture is also varied within capital cities. In Sydney, the most expensive 25 per cent of homes have been harder hit compared to the lower and middle end of the market, but over October the top end of town had started to improve on CoreLogic data. There was a 0.3 per cent increase in the most expensive property values, and a 0.2 per cent lift at the lower end.

"While this is only one month of data, it has often been the case that premium housing markets lead both the downturn and the upswing, so it will be interesting to see if higher value properties gather further momentum over coming months," Mr Lawless said.

While Melbourne prices are performing below the rest of the country, National Australia Bank analysis of CoreLogic's weekend auction results is promising for a recovery in Melbourne with volumes of homes for sale ramping up and a clearance rate of 75.8 per cent. The Victorian government started allowing on-site inspections of homes from September 28.

NAB director of economics and markets David de Garis said the 604 auctions scheduled last weekend was "almost the same as the same week last year" and auction numbers would make up lost ground in the weeks ahead.

"This was a long weekend for some in Melbourne because of Tuesday’s Melbourne Cup holiday and is usually a lower than normal week for auctions, but this year, the race that stops a nation proved to be no hindrance, a high degree of catch-up after a near closed market the over-riding element," Mr de Garis said in a research note.

Sydney auction volumes continued in a "mild upward trend usually seen at this time of year" with a large portion of sales those sold prior to auction.

Regional areas performed particularly strongly over October, with a 1.1 per cent rise in country NSW and Queensland home values and a 0.5 per cent increase in Victoria.

Mr Lawless said the last two months had seen a complete recovery in the prices in regional areas overall, with country prices up 1.7 per cent in the seven months since March when the pandemic hit. Capital city prices have collectively fallen by 2.3 per cent. Mr Lawless attributed this to a shift towards working from home, more affordable prices, lower densities and lifestyle factors.

The most important news, analysis and insights delivered to your inbox at the start and end of each day. Sign up to The Sydney Morning Herald’s newsletter here, to The Age’s newsletter here and Brisbane Times‘ here.