Paying tribute as a team. Princess Kate and Queen Consort Camilla rode in the same car behind the ceremonial procession for the late Queen Elizabeth II.

Princess Kate and Queen Elizabeth II’s Bond Through the Years

The Princess of Wales, 40, joined Camilla, 75, in one of several black town cars on Wednesday, September 14, during the 38-minute procession from Buckingham Palace to Westminster Hall, where the queen’s coffin will lie in state for several days before her funeral on Monday, September 19.

Kate sat beside Camilla in the backseat of their vehicle on Wednesday, both women wearing all-black as they paid their respects to the late monarch. King Charles III’s wife donned a large black hat, while Kate accessorized with a pair of pearl earrings and a sparkly brooch. 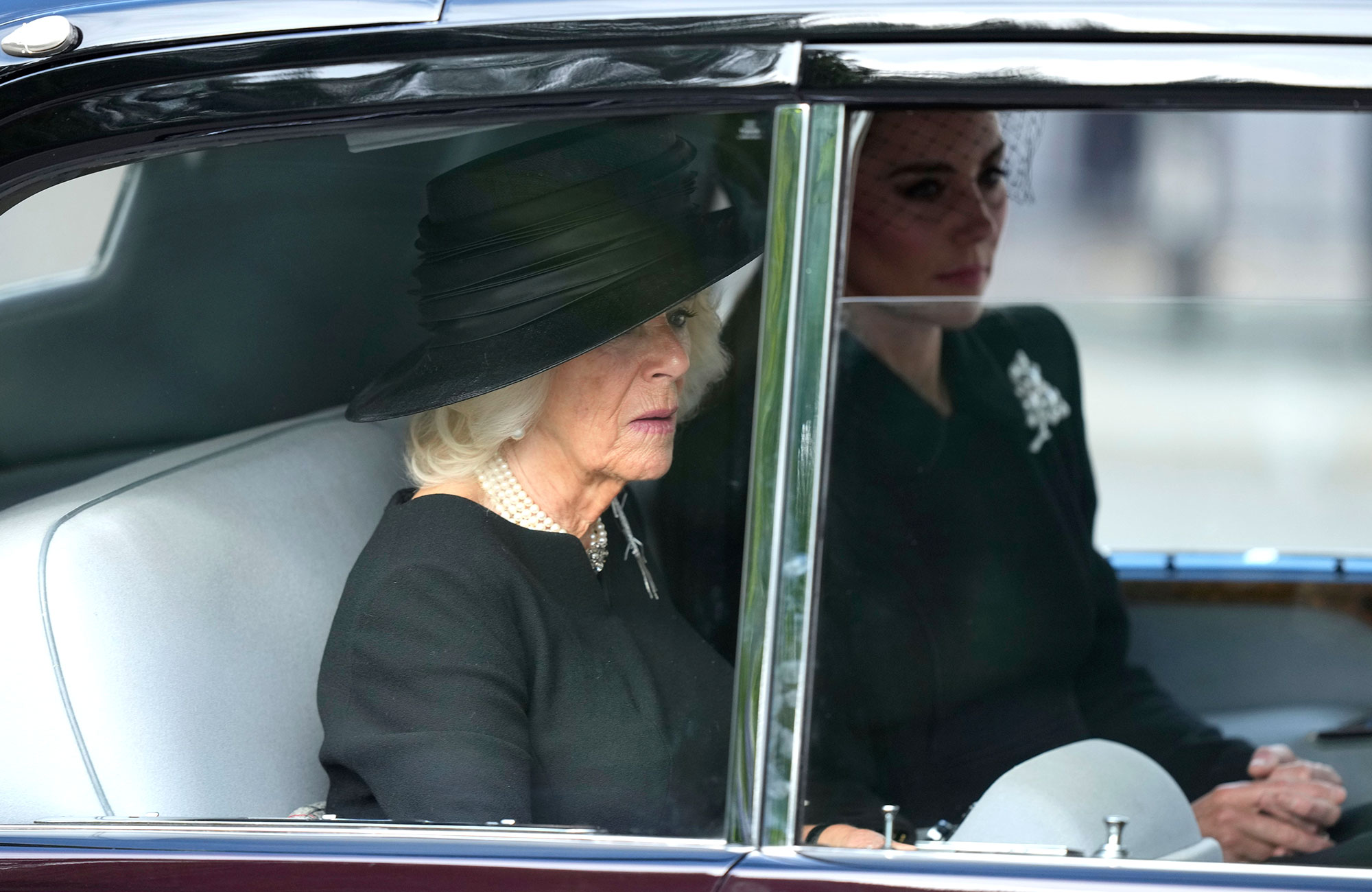 Well-wishers lined the streets as the royal procession made its way through London. Prince William and Prince Harry marched alongside other members of the royal family behind Elizabeth’s hearse. The brothers were joined by their father, 73, Princess Anne, Prince Andrew, Prince Edward and Peter Phillips. Meghan Markle and Sophie, Countess of Wessex, also followed the procession in a car.

The U.K. lost its longest-reigning monarch on Thursday, September 8, with Charles immediately being named king in the wake of Elizabeth’s death. Earlier this year, Her Majesty announced that she hoped Camilla would take over as Queen Consort once Charles assumed the throne.

“When, in the fullness of time, my son Charles becomes King, I know you will give him and his wife Camilla the same support that you have given me,” the late monarch noted in a February statement while celebrating her historic 70-year reign. “And it is my sincere wish that, when that time comes, Camilla will be known as Queen Consort as she continues her own loyal service.” 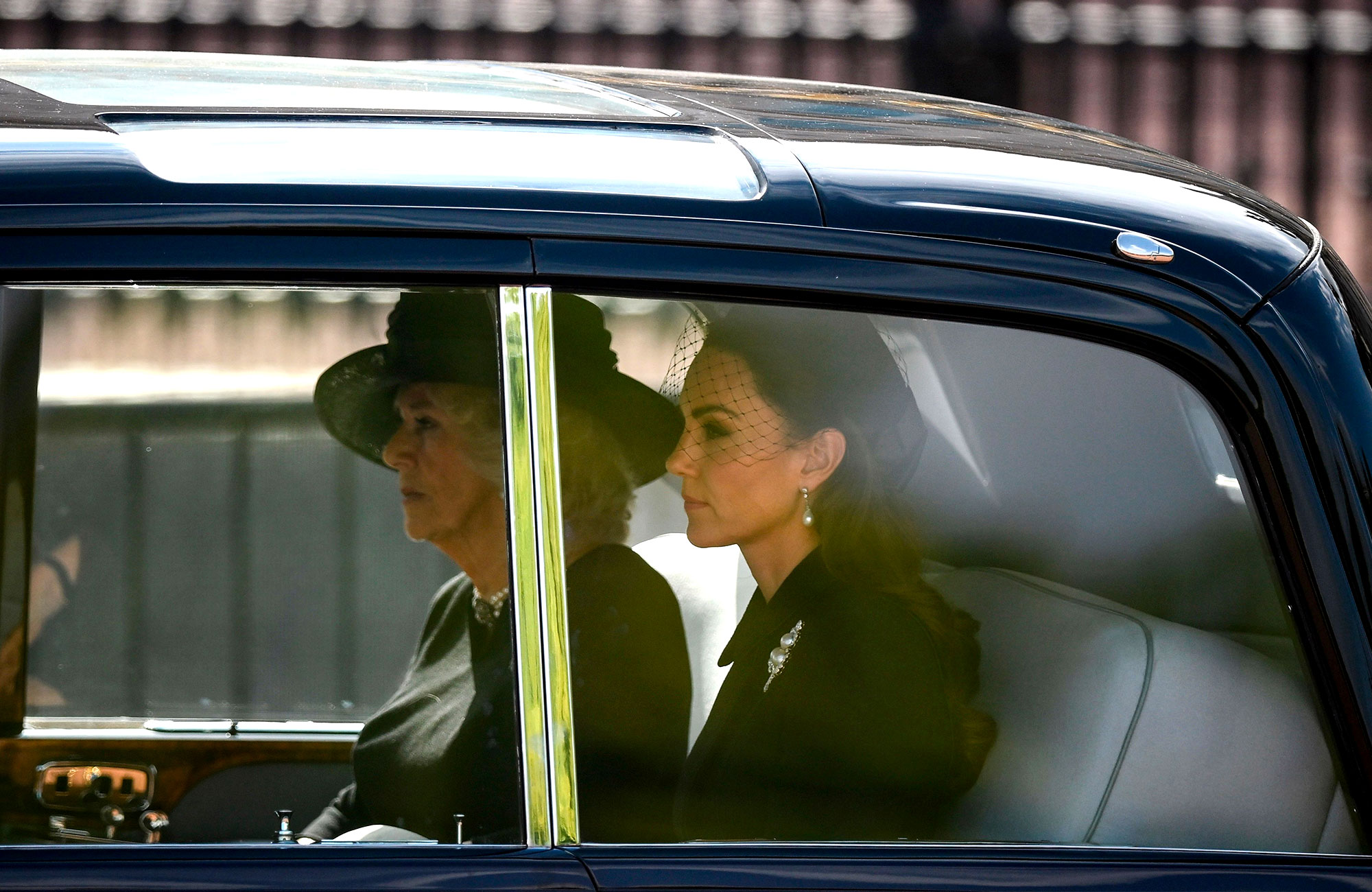 At the time, Charles and Camilla accepted the honor and thanked Elizabeth for her kind words. “On this historic day, my wife and I join you all in congratulating Her Majesty The Queen on the remarkable achievement of serving this nation, the Realms and Commonwealth for seventy years,” the pair, who wed in 2005, noted in a statement of their own. “The Queen’s devotion to the welfare of all her people inspires still greater admiration with each passing year.”

Until then, no official decision had been made about Camilla’s future role within the British royal family. Nearly one week after Elizabeth’s death, she gave an update on how the royals were coping in the wake of the loss.

“We’re doing our best,” she told a woman in Belfast, Ireland, on Tuesday, September 13, before returning to London to receive the queen’s coffin.

Kate, for her part, inherited the Princess of Wales title as her husband, 40, was named Prince of Wales. William is now first in line for the throne, and his grandmother had big plans for both him and Kate before her death.

“Her Majesty sees the Cambridges as the future of the monarchy and trusts Kate and William’s judgment implicitly,” a source exclusively told Us Weekly in August 2020. “Kate asks for advice about speeches she’s due to make, whom she can depend on most within the palace and protocol dos and don’ts. The queen’s more than happy to impart her wisdom — she’s proud to be Catherine’s go-to adviser about royal life.”