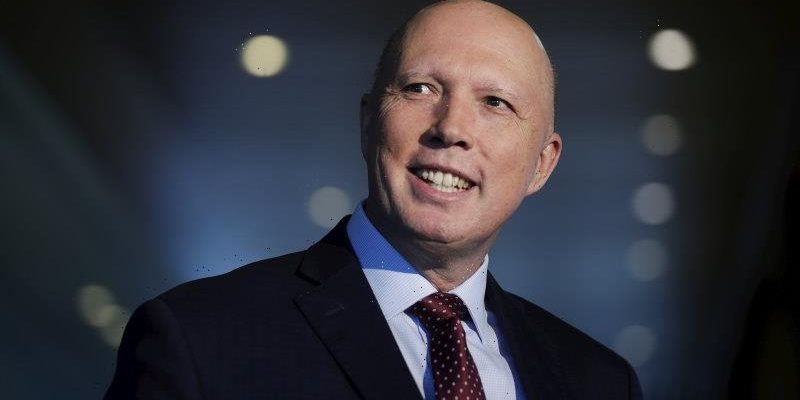 When Peter Dutton visited his first military base as Defence Minister last month, he had a remarkable message for senior military officers: leave the room.

He was at Lavarack Barracks in the garrison city of Townsville and he was on a mission. The objective was two-fold: begin lifting morale following the Brereton war crimes inquiry and find out what troops on the ground want from the government. 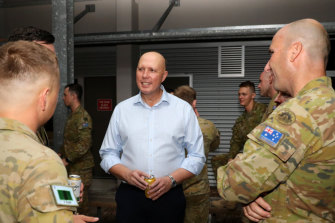 “He comes to Townsville, we meet with a bunch of soldiers and senior officers. The first thing Peter did was to tell the cameraman to get lost. And then he said to all the senior officers: ‘You can leave as well’,” says Phil Thompson, the member for Herbert in north Queensland and a former soldier.

“He wanted to talk to the soldiers about what they needed from the government to do their job – how’s the kit, how’s the morale? That’s the first time any minister for defence has ever done that.”

Talk of war was all the rage last week after Dutton said the risk of a conflict over Taiwan could not be discounted, and Home Affairs secretary Michael Pezzullo warned the “drums of war” were beating.

So what is Dutton doing and where does he want to take the Australian Defence Force? And is the man who missed out on the prime ministership by a handful of votes in 2018 in it for the long haul?

Dutton and Pezzullo’s comments last week come against a backdrop of heightened tensions in the Indo-Pacific, where China is trying to exert influence over neighbouring Taiwan. Chinese Foreign Ministry spokesman Wang Wenbin responded by saying he hoped Australia was aware of the sensitive nature of the issue and could “avoid sending any wrong signal to Taiwan independence forces”. Another Chinese government spokesman, Zhao Lijian, called Australia’s politicians the “real troublemakers” and declared Australia’s hyping of a China threat unethical.

Dutton, the former home affairs minister, is unapologetic about his direct language and says he has no problem with the Anzac Day message delivered by Pezzullo, his former department secretary.

“Do we need to have a more frank discussion with the public? Yes, we do. It’s an interesting dynamic because I think part of the public is frankly ahead of where the public debate is because there’s just so much information available online,” Dutton tells The Sydney Morning Herald and The Age.

“People see the reported comments of the [Chinese] ambassador and the vice ambassador here, as well as the spokesman out of Beijing … so there’s an enormous amount of information out there in relation to China and its activities.

“And certainly it’s been my approach in public life, it doesn’t always suit everyone, but I’ve always found it best to be honest, frank and transparent. And people can take that advice or they can pretend there’s a different reality.”

Asked if he was surprised by the response to his and Pezzullo’s recent comments, Dutton says there will always be a “knee-jerk negative reaction from a part of the media regardless of what I say, or what [Prime Minister] Scott Morrison says – that’s just their instinct”.

“And you can’t be distracted by that. The views that matter to me are Australians who are living across cities, towns and suburbs across the country. And they know that what we are saying is factually based,” he says.

“I’m not seeking to distort the exact comments of the spokesman from the Foreign Affairs Department in Beijing – that’s the reality of their own comments. They’ve been very clear about their strategy, their approach and their desires and so pretending it’s not being said or turning a blind eye to it is not in our national interest.”

The threats facing the nation

To say Dutton, who turned 50 last year, faces an immense challenge is an understatement. In the immediate term, the country needs to boost its defences against the increasing wave of “grey-zone warfare” – cyber attacks, disinformation campaigns and the like – from authoritarian countries including China and Russia. Second, he must ensure the ADF can defend against and deter a peer competitor in the Pacific.

China’s rise and growing assertiveness across a number of flashpoints – whether it be the Taiwan Strait, Hong Kong, the South China Sea or East China Sea – have increased the chance of war. Last year’s Defence Strategic Update said the “prospect of high-intensity conflict in the Indo-Pacific, while still unlikely, is less remote than in the past”. It warned the country no longer had a 10-year window to build its defences. In light of all this, Dutton and Pezzullo’s warnings were unremarkable. 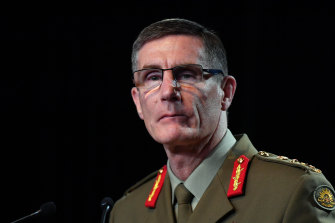 But the decision not to revoke the meritorious unit citation didn’t sit well with a number of military experts and one of the nation’s peak defence advocacy groups. Australian Defence Association executive director Neil James says the intervention was a bad example of a Defence Minister overriding the Chief of the Defence Force. “If the decision was taken just for political reasons, then it was disgraceful,” he says. “I don’t think it was, but there is a perception that it was taken for political reasons”.

John Blaxland, professor of international security and intelligence studies at the Australian National University, says he is concerned Dutton’s action was all about “bending to a populist will”.

While the country faces a number of escalating threats, Dutton has to deal with major blowouts and schedule slippages in key military acquisitions such as the $90 billion Future Submarines program. The 12 new submarines are now $40 billion over budget and the contract has been plagued by a dispute with the French contractor over a commitment to maximise local jobs.

Both James and Blaxland welcome Dutton’s plain-speaking on the threat of China and his signalling to the department to get major projects back on track.

“It’s a wake-up call to Australia,” Blaxland says. “We have been living with a post-Cold War defence force designed for America’s unipolar moment where we make niche contributions to American endeavours and don’t feel we need to do the heavy lifting. We have a defence force that is essentially a boutique force.

“Our ADF is really good – highly capable, professional, responsive, high-tech and ethical by and large. Except it’s tiny.”

James says Dutton is “getting stuck into the department” on the delays in key acquisitions.“The risk of something happening before these new capabilities come online is increasing,” he says.

Speaking about the portfolio generally, Dutton says he has had some frank discussions. “And I’ve been very transparent with the Chief and the heads of the services, as well as the secretary, about my expectations,” he says.

Is Dutton in it for the long haul?

To many on the left of the political spectrum, Dutton has come to symbolise everything they loathe about the Coalition government. In full political flight, the former Queensland cop can be uncompromising and unforgiving. He sometimes appears to thrive on their hatred, best symbolised by a tweet in 2011: “You dirty lefties are too easy. Enjoy your weekend.” He has also been accused by opponents of fanning the flames on race, famously declaring Victorians were “scared to go out to restaurants” because of African gang violence and recently describing an Australian government policy of deporting non-citizens with a serious criminal record as “taking the trash out”. He is currently suing a refugee advocate for defamation over a tweet labelling him a “rape apologist”. The progressive flank within his own party in 2018 was torn between liking him as a person and believing his public persona was politically unpalatable for progressive Liberals in Sydney and Melbourne.

Labor MP Anthony Byrne, deputy chair of the Parliamentary Joint Committee for Intelligence and Security (PJCIS), often warns colleagues Dutton is a “Liberal Paul Keating” when it comes to his political attacks in Parliament.

“He can tear us to bits in Parliament – he is unafraid, bold, can crystallise an argument against us and it hurts,” Byrne says. “He is the only one of them who can really hurt us. He can be very Keating-esque.”

The public perception of Dutton is sometimes worlds away from that of those who know him. The tough-talking conservative political warrior has built his reputation on his hardline immigration stance, yet some MPs quietly praised him for quickly sorting out immigration matters in the home affairs portfolio. And while he can sometimes seem overly serious in public, those close to him describe a man with a wicked sense of humour.

Assistant Defence Minister Andrew Hastie has become a close ally since being elected to Parliament six years ago.

“He’s a no-nonsense bloke. I’ve had a bollocking from him. And then a few hours later he saw me at the airport and we cracked a joke together. That’s the sort of bloke he is – he will tell you what he thinks.”

Hastie, a former SAS captain, says Australia faces a “very uncertain strategic environment” in the years ahead and the ADF needs to “get back to our basics, lean into our great heritage and we need to prepare our country for whatever the challenges come our way”. “So I think Peter is perfect,” he says. “Defence is really keen for strong leadership. Peter’s clear language and direct answers is part of his leadership style.”

After the Townsville visit, Dutton and Hastie visited the SAS Regiment in Perth. Sources say the mood has shifted since their visit, with members seeing it as a turning point for the SAS’s restoration after the Brereton inquiry.

Liberal senator James Paterson, chair of the PJCIS, says the “changing geopolitical environment we’re now operating in demands we be clear-eyed about the threats we face and honest with the Australian people about it”. “There’s no one better suited to that task and these times than Peter Dutton,” he says.

The defence portfolio has been let down by the high turnover of ministers over the past decade. Of the 14 defence ministers since 1996, only two (Robert Hill and Stephen Smith) have served for more than three years. While it was rumoured last year that Dutton might leave Parliament after the next election, he seems rejuvenated. Dutton says he is committed to staying in the job after the next poll.

“Whilst I look much older, I am only 50, so I intend to be around for a long time yet,” Dutton says.

“I think a longer tenure is more desirable because it allows for the implementation of a program of policies and changes that a minister has a vision for the organisation.”

In other words, Dutton isn’t leaving the room until the mission is accomplished.