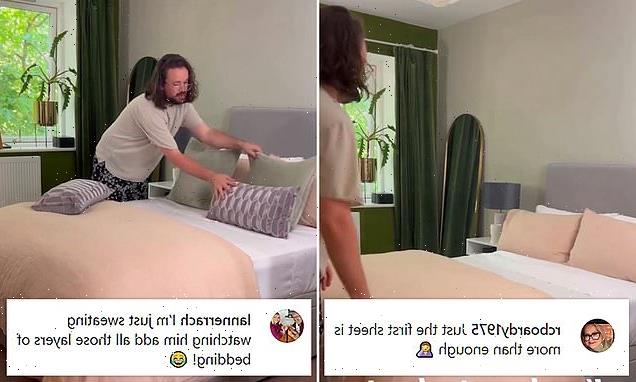 ‘I’m sweating watching him add those layers!’ People mock M&S video on making your bed cool for heatwave nights – because it includes using a BLANKET, duvet and extra cushions!

A video posted on M&S’ Instagram account advising people how to make their beds cooler ahead of Britain’s record-breaking heatwave this week has been ridiculed online – as it uses a blanket, duvet and extra cushions.

The video on Instagram advises people to use 100% linen bedding as it ‘helps regulate body temperature’. It also urges people to use a ‘comfy, cool fitted sheet,’ then ‘layer up’ with a flat sheet.

So far, so good, but then it goes on to encourage people to ‘add a duvet’ for when temperatures drop in the middle of the night and to ‘finish off’ with a selection of cushions and throws.

Temperatures in the UK are expected to soar to up to 30 degrees at night on Monday and Tuesday. 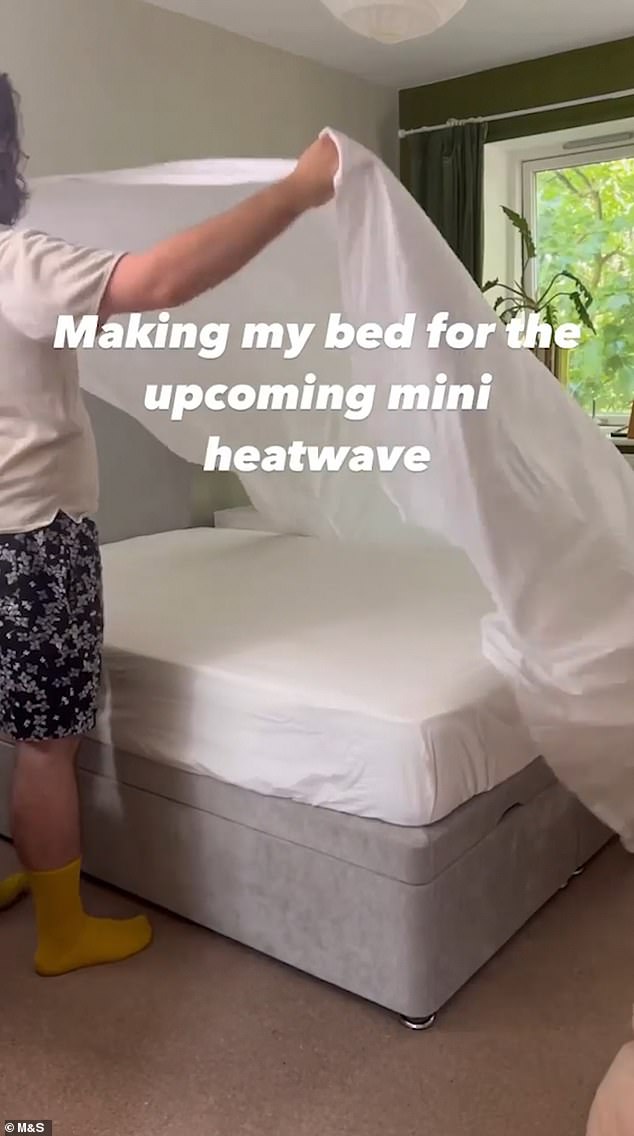 Fail: The much-mocked M&S video, posted two days ago, features a man with an American accent teaching people how to make a bed for the upcoming mini-heatwave 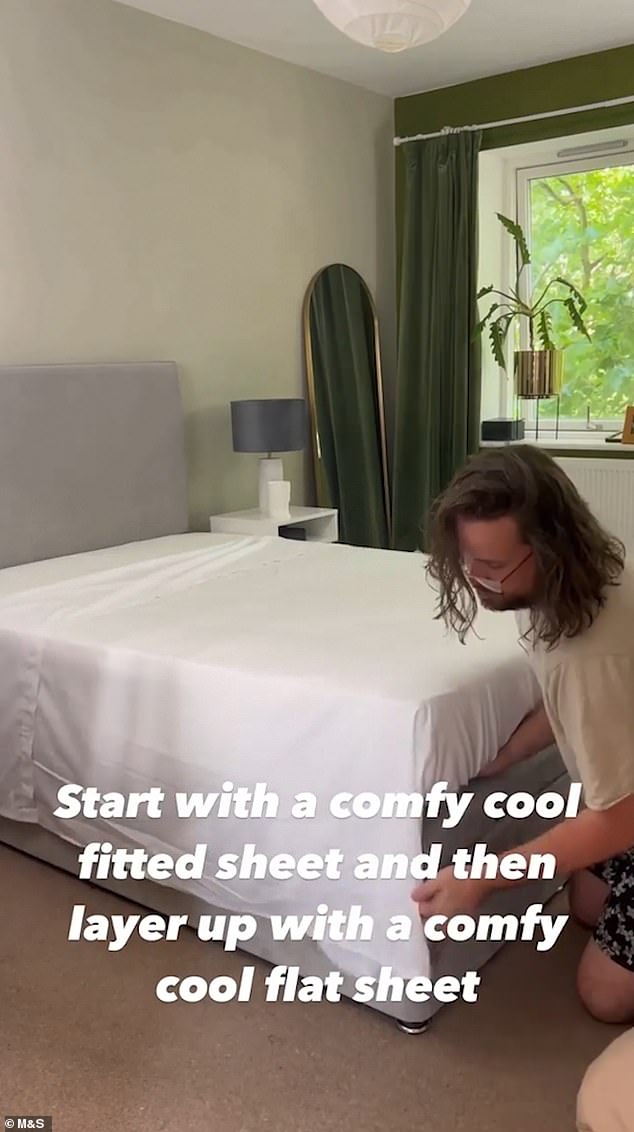 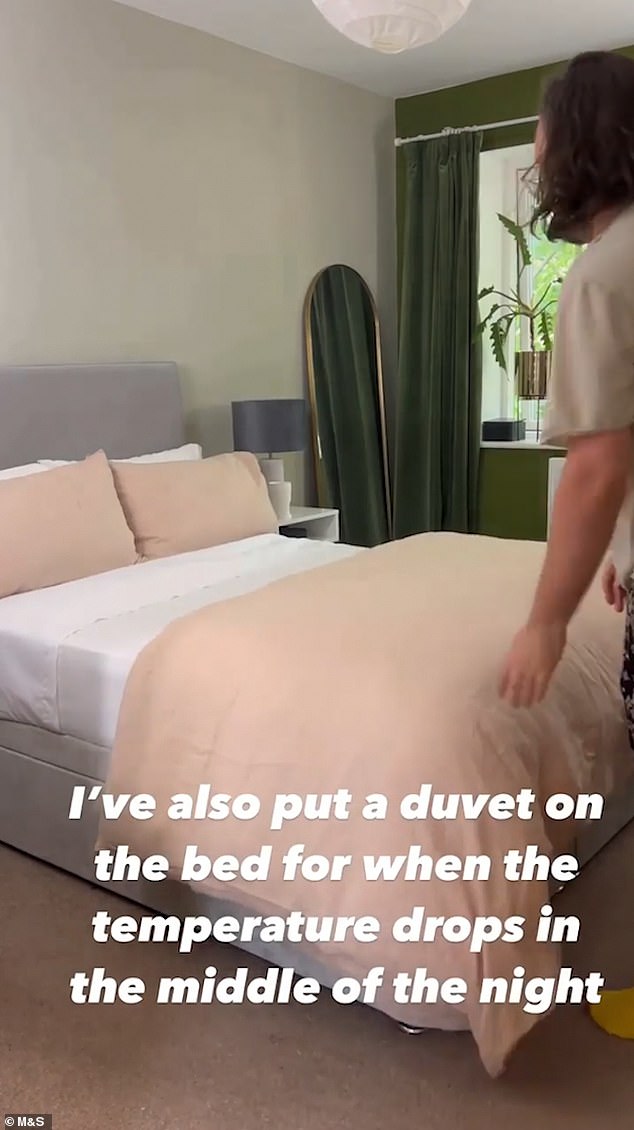 Most people are kicking off their duvets in order to sleep, but M&S advises keeping one on…and adding a throw on top of that

Many widely mocked the video, unimpressed that M&S was attempting to sell bedding off the back of a heat wave

Others said they were breaking out in sweat just at the thought of that many layers. The temperature is expected to reach 40 degrees in some of England on Monday night 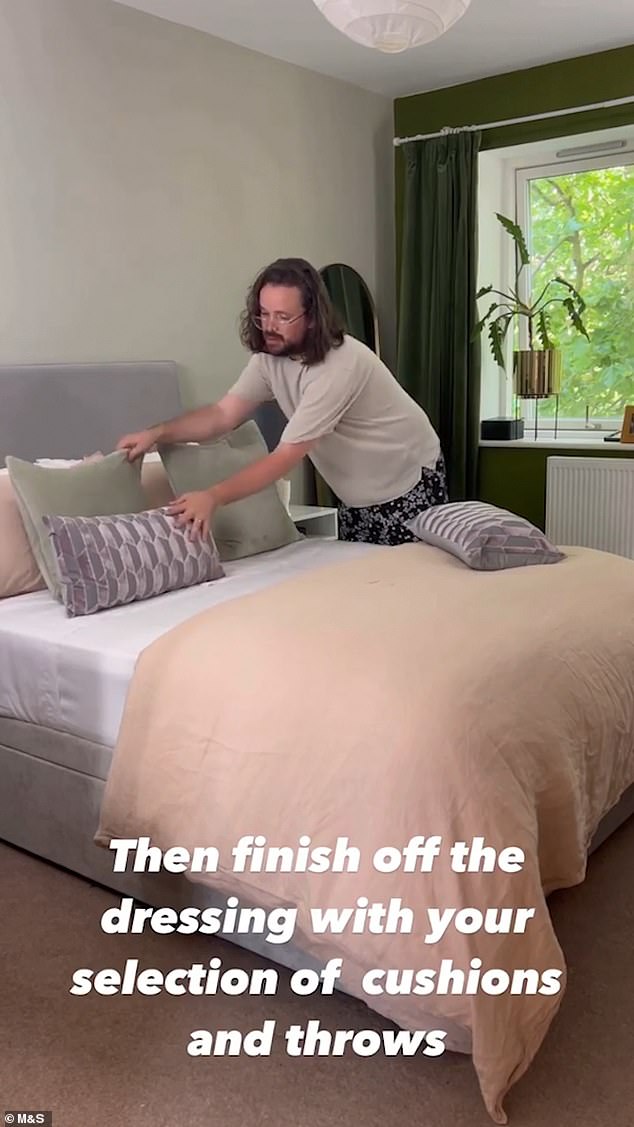 Not cool enough yet? Then why not add a throw and some cushions to see if they will cool you down?

But the video, posted under the tag line ‘Struggling to sleep through the balmy summer nights?’ has been ridiculed online.

One user, @alixxpoo, wrote, ‘Cool bedding my backside!! You couldn’t put more bedding on if it was winter.’

Another @lannerrach wrote, ‘I’m just sweating watching him add all those layers of bedding!’

Poking fun, @lmjakob replied, ‘I really thought he was going to throw that duvet on the floor,’ while lisacrow92 commented, ‘Thanks but I’ll just be star-fishing on top of the duvet.’

Another, @emmalouiserobins wrote, ‘Why would you have that many layers on in a bloody heatwave?!’

While another commented, ‘That is too much for a normal night let alone a heatwave of expected 39 degrees.’ 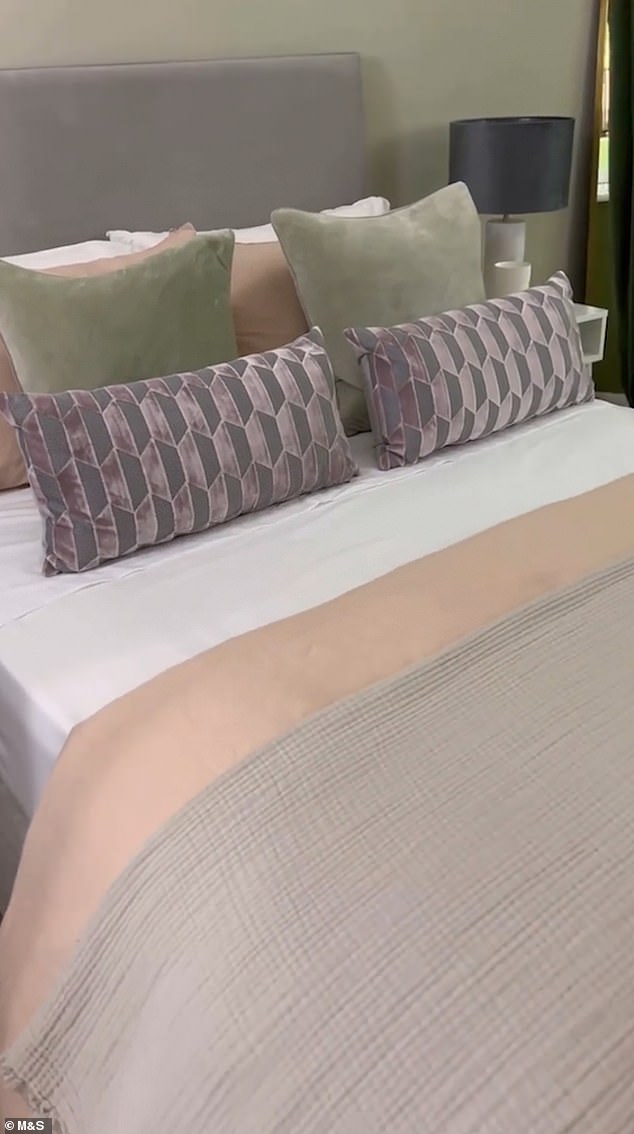 The finished bed with its throw and cushions – what could be cooler?

For those women who are menopausal and have hot flushes, the idea of all this bedding was torture

Some also criticised the way the man in the video had made the bed.

A user called this_veteran_can, wrote, ‘Let me know if you need someone who can do “Hospital Corners” because unless you use a fitted sheet, anything else just looks scruffy when it’s tucked in.’

Another eva_elite_life wrote, ‘My nurse brain looking at the folds in the corners.’

But not all poked fun at the video, which gained 5,160 likes.

One @jojowright71, said, ‘Watching this makes me happy.’

While others were also actually impressed by the bed-making skills of the man.

@mrstaffam wrote, ‘Please can he also teach my husband how to make the bed?!’

While @laura_renovating_no66 @_hanr0se, wrote, ‘Where do you find a man who can make the bed like this.’