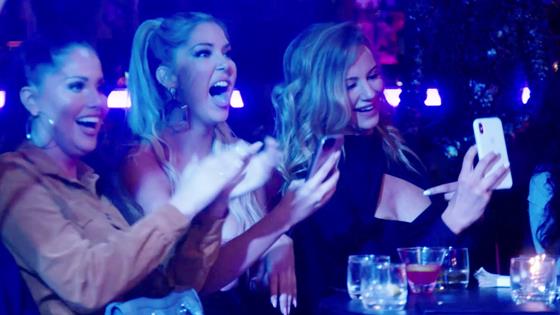 Is Owen Pierson a thief? Asking since he just stole the spotlight.

“It’s really nerve-wracking ’cause I’m about to go out on stage and my dad’s gonna see me,” said Olivia Pierson‘s brother before mounting the stage. “I don’t know how he’s gonna feel, but I look good. So let’s go, bitch!”

Owen made his official drag debut during Sunday’s new Nat & Liv—as Shewongo, the death-dropping, heels-wearing queen whose persona he and Joel Halcro first dreamt up in adolescence—but getting there wasn’t easy. First, he needed an outfit, wig and dance routine to boot. Then he needed to find the words to tell his father about it.

“I’m nervous, but I’m excited,” he told pal Kenneth Wyse, who won Vancouver’s Next Drag Superstar in 2017 as Kendall Gender and helped get Owen fitted in costume before his big performance. When Kenneth inquired further about what exactly was stressing him out, the Pierson sibling admitted, “I think I’m most nervous to tell dad.”

Owen’s younger sister Sophia Pierson accompanied him to the fitting and said she “could see why” maybe he’d feel that way, given their father Brian Pierson‘s religious background (he was a pastor, and as he said himself this week, “a pretty traditional” one) and historically complicated relationship with his son’s identity.

“My dad was raised really old-fashioned…So, it was hard for him to accept the fact that I’m gay,” Owen explained during a confessional. “He was battling religion, so he thought I could change. And that was hard for me.”

In the present though, Sophia was convinced Brian would be supportive and pretty sure he’d go see Owen perform if an invite was extended to him. When her brother was understandably reluctant to broach the subject, Sophia went ahead and did it for him.

Mid-way through a private, family-wide skating session at Roger’s Arena, Sophia pulled her dad aside to brief him on Owen’s plans and let him know her brother “was definitely concerned to see how [he] would react.” Fortunately, minutes later, Brian took matters into his own hands.

“‘Phia was telling me about you wanting to perform and do drag,” he told his son point-blank. “I don’t want you to withhold stuff. What’s the point?”

Owen, already tearing up, admitted he was “afraid” of what Brian might think.

“Even at my age, I still feel like I’m the little 13-year-old kid trying to impress dad,” he said. But his father, who acknowledged there’d been “a gap” in their relationship for years and was eager to close it ASAP, assured him there was no need to try.

“I love you and I want to support you,” the Pierson dad finished. “And if it’s me watching you performing drag, so be it.”

At showtime, the Halcro-Pierson clan—Brian included—sat in the first row. Sophia cheered through the entire set while Liv cried and Brian filmed the whole thing. Owen’s mom Julia Pierson even rocked a bedazzled gold blazer for the occasion because “he’s the queen, I’m the queen mother.”

“I know Owen was really happy you came to support and stuff,” Liv told her dad after the performance. “Really special for him.”

“Yeah, he probably liked the cash I put in his bra!” Brian cracked without missing a beat. Take that, “tradition”!

“Who would’ve thought a drag performance would’ve brought my dad and I together?” an emotional Owen asked the camera. “He’s for it and he supports me and…I don’t know what to say. I don’t have words at this point. I’m so grateful.”

See how it all went down this week—and find out how Stephanie Halcro reacted when she discovered Natalie Halcro had tracked down her biological sister online without permission—in the full recap video above!