Acting Prime Minister Michael McCormack has labelled the Black Lives Matter movement a “protest over racial riots” in a new statement claiming a parallel with the storming of the United States Congress last week.

One day after Amnesty International criticised him for the “deeply offensive” comparison, Mr McCormack argued that both protests should be condemned for their violence. 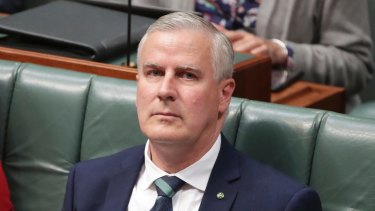 Acting Prime Minister Michael McCormack did not concede any difference between the riots and the Black Lives Matter protests.Credit:Alex Ellinghausen

Asked whether the pro-Donald Trump mob attack on the Capitol was different because it sought to impede a democratic institution, Mr McCormack did not concede any difference between the riots and the Black Lives Matter protests against police brutality and racially motivated violence.

“It involves violence. It involves the destruction of property. It involves deaths of people, and any violence of that form is condemned,” he said.

Labor treasury spokesman Jim Chalmers accused the acting Prime Minister of a “failure of leadership” in claiming the equivalence.

The US Crisis Monitor, a joint project between the Armed Conflict Location & Event Data Project (ACLED) and the Bridging Divides Initiative (BDI) at Princeton University, warned of a “heightened risk of political violence and instability” last year.

The study identified 7750 protests from May 26 to August 22 linked to the Black Lives Matter movement and concluded more than 93 per cent were peaceful.

The US Insurance Information Institute cited an industry estimate that damage claims related to the Black Lives Matter protests could reach more than $1 billion, but said this was subject to further evaluation.

The US PolitiFact service, run by the Poynter Institute, rejected claims last June that more than 20 police officers were dead as a result of the Black Lives Matter protests. It concluded the death of one officer, David Dorn, was “conclusively connected” to violence at the protests.

“It beggars belief that the acting Prime Minister is drawing his equivalence,” he said.

“This is a stupendous and outrageous failure of leadership. When leaders all around the world are rightly condemning the violence in Washington, DC, we have members of the Australian government trying to legitimise it or draw false comparisons.”

“The Black Lives Matter movement is a push-back against racist policing and politics. In contrast, the Capitol riots were because the far right didn't want to accept the results of a fair and democratic election," Senator McKim said.

“Our warning to the Liberals is simple. Taking up Trump-style politics is poison to democracy. If this is the direction the Liberal Party is heading, it bodes terribly for the future of Australian politics.”

The political dispute over the US protests comes as Mr McCormack and other Morrison government ministers criticised Twitter and Facebook for suspending or banning US President Donald Trump on the grounds he incited the violent attack on the Congress last Thursday.

While Technology Minister Karen Andrews called for “transparent rules” about how social media companies removed content, the government has not said whether it wanted to regulate the way private companies decided who could use their services.