Let’s talk about Sex/Life. After the Netflix series went viral for its steamy hookup scenes and other NSFW on-camera moments, the cast looked back at their memories from the set.

In a “scene breakdown” video on the show’s official Instagram page on Wednesday, August 4, Billie and Brad themselves (aka real-life lovebirds Sarah Shahi and Adam Demos) watched back their fictional couple’s poolside love scene. 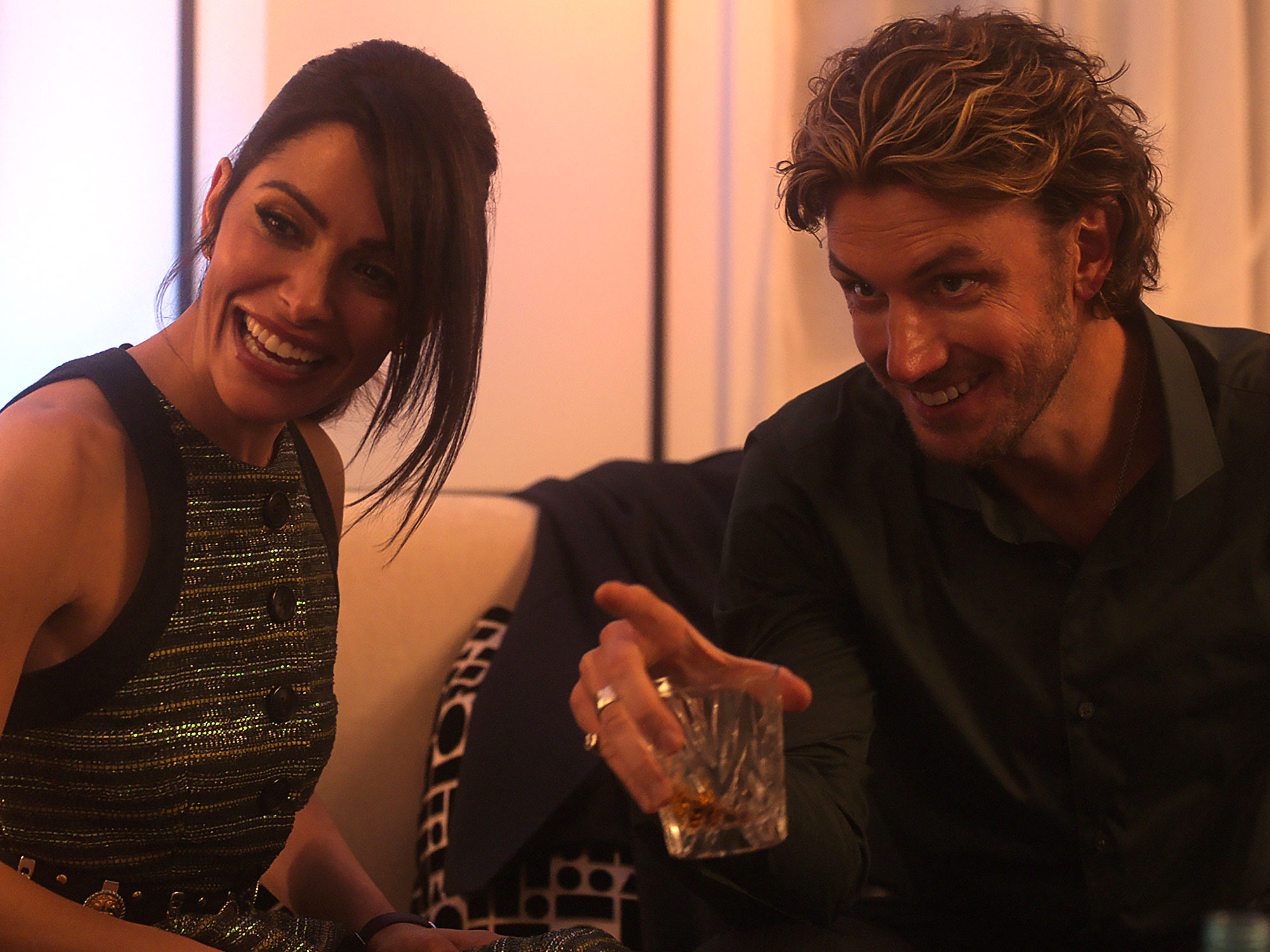 The four-minute clip began with footage of Shahi, 41, preparing to strip down. “Oh my god, I’m about to be naked,” she realized, hands covering her face in shock. “Ugh! This was like the coldest day in Canada,” she remembered, as the Australia native, 35, recalled it felt like “minus nine million degrees.”

The scene continued as Brad approached Billie, and the Texas native said, “I don’t know if I can watch this,” pulling her white T-shirt over half her face in anticipation.

Everything We Know About a Potential ‘Sex/Life’ Season 2

At the same time, her real-life boyfriend grinned from ear-to-ear and told her, “You look so much more enjoyable than you do.”

The censored-for-Instagram clip continued to play as the pair smooched onscreen, and Shahi even covered the UnReal alum’s eyes. “I wanna watch it,” he added. “How warm and relaxing does it look there?”

“I know, it looks really romantic,” the Alias alum replied, as they watched Demos pull his shirt over his head onscreen.

“Yeah, I’m rattled,” the Falling Inn Love star said, smiling and blushing as The Rookie alum buried her head inside the neck of her top. “My heart’s been racing. Holy s—t.”

Shahi even recalled some of her now-iconic lines, mouthing along in the new footage. “So weird! … It actually works,” she said at the end of the clip. “Is that it? Well, what do you want us to say? I think you did a good job, scene partner. My heart is still going.”

Show creator Stacy Rukeyser also commented on the Instagram video, writing, “I will never forget the day we shot this behind the scenes bit. It was the first time Sarah and Adam had seen anything from the show. And how amazed they were by how it had all come together, how beautiful it was, how romantic, how wonderful each of THEM were in it… well, those are the moments dreams are made of.”

After watching the scene back, the pair then described what it was like to film it and their intense blocking process.

“Yeah, like, we talked about, you know, the script is such a good bible to go by in terms of ‘he comes up Billie’s leg and they kiss’ or whatever,” the Black Adam actress added. “So, it’s like, ‘OK, so you’re gonna dive under. You go up that side of the pool, then he dives in. And when you go under, you’re gonna grab her legs and come up. And then you kiss.’ And, I think we just ended up talking through a rehearsal.”

Demos remembered shooting outside on the Canadian rooftop, which was “so cold and so windy,” though it looks the opposite on film. He detailed the pair’s excitement to get into the pool “because it was the only warm thing on the day.”

Friends IRL! The Best Behind-the-Scenes Snaps of the ‘Sex/Life’ Cast

By the end of the clip, Shahi remarked how she was still in shock after watching it. “My hearts still going,” she added. “Like, I’m kind of shaking a little bit because it, like, worked and I never think anything ever works. It f—king worked. Wow, and with the thunder and everything. That just, yeah, yeah. You did a good job, Adam Demos. You did a good job.”

The pair’s scene breakdown came a month after the streaming platform revealed via Twitter that even steamier moments from the scripts never saw the light of day — including explicit descriptions of the couple’s underwater intimate encounter from this rooftop scene in the second episode.

“There are a few scenes from Sex/Life that are so steamy, we couldn’t post them online — but no one said anything about showing you the script pages,” Netflix tweeted in July.

The L Word alum previously gushed about how her scene partners made these types of scenes more comfortable to film.

“You’re only as good as your scene partner and [Demos and Mike Vogel] are so phenomenal,” Shahi exclusively told Us Weekly in June. “They made my job very easy and they’re both easy to look at. So, oftentimes, I would joke with my mom, I’d just say, ‘I’m going into work,’ and she’d be like, ‘That’s not work because you got to work with Mike and Adam. That’s not called work.’ … [As a group,] we instantly had chemistry.”