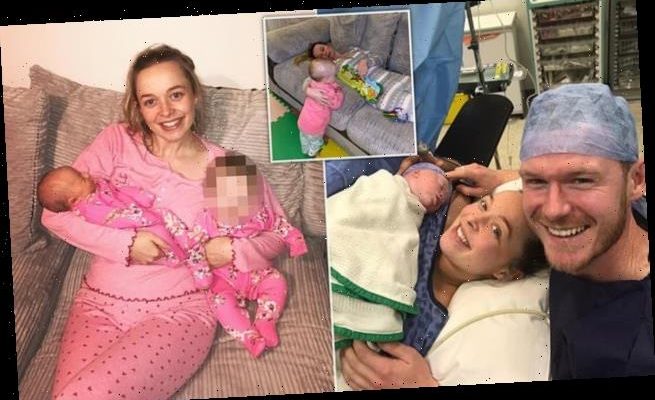 New mother, 29, reveals she’s struck with agonising headaches whenever she stands up due to fluid leaking from her brain after nick to her spinal cord during a C-section

A new mother has told how she suffers agonising headaches whenever she stands up due to fluid leaking from her brain after suffering a small tear to her spinal cord during a caesarean – meaning she now has to lie down constantly.

Victoria Conn, 29, from Newtownards, Co Down, suffered a rare cerebrospinal fluid (CSF) leak while giving birth to her daughter Charlotte, now one, by emergency C-section.

The leak was caused by a small tear in the outer membrane that contains the fluid surrounding the spinal cord, which occurred when the epidural was injected.

Victoria was initially treated with a blood patch which was successful, but it ruptured again in October – and she told the Mirror that doctors in Northern Ireland have refused her the same treatment again. 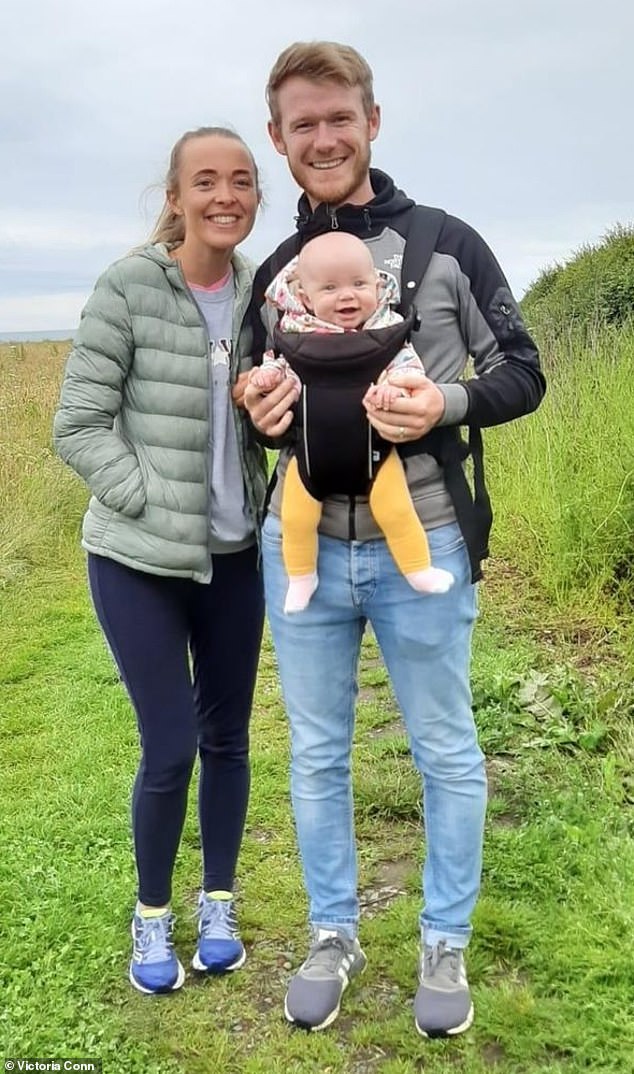 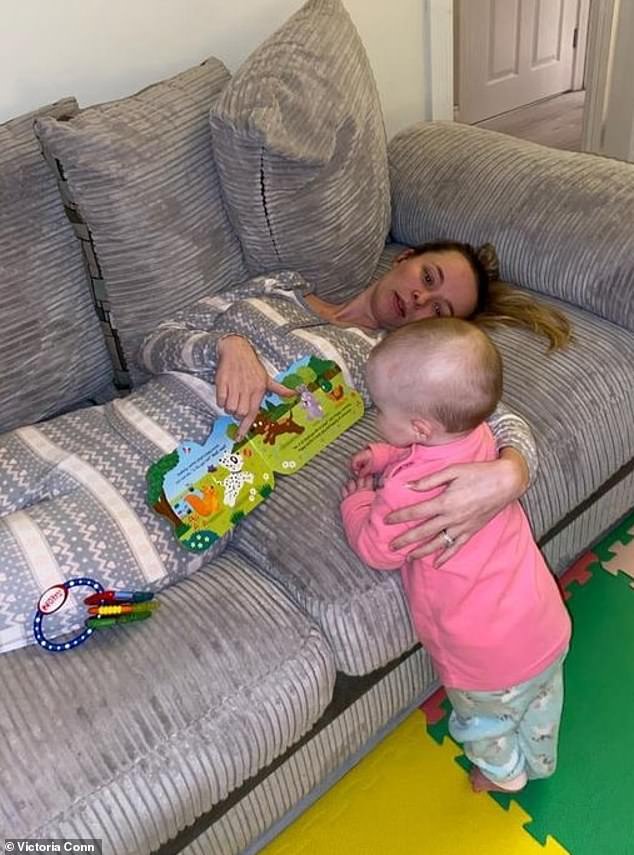 Victoria’s husband Curtis, 30, is now her carer, helping her shower and eat, and has to take care of their daughter.

Describing the pain as ‘crushing and horrific’, she told how it ‘forces’ her to lie down – and when she’s on her back she feels completely fine.

But when she gets up, the pain comes rushing back straight away. She said: ‘It’s the most excruciating, crushing pain – essentially your brain is just sitting on your skull on the nerves.’

Victoria, who is usually very active and loves the outdoors, added that she feels ‘constantly guilty’ and ‘heartbroken’ that she’s not able to be the mother she wants to be to Charlotte. 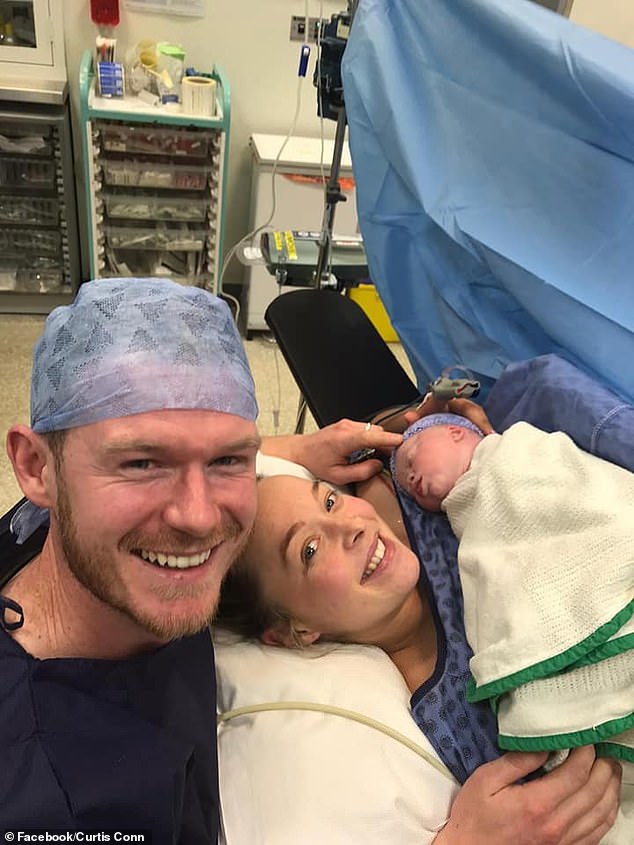 The CSF leak was caused by a small tear in the outer membrane that contains the fluid surrounding the spinal cord, which occurred when Victoria received her epidural injection during the C-section

‘I know I can make up for it but it’s just these early stages of life are so important for a mum and her baby – it just feels cruel,’ Victoria said.

‘It’s been a nightmare, and it’s been so hard even trying to see that it will be better but I have to because if I don’t think it will get better then I just feel like what’s the point?

‘A few weeks ago I did just feel I can’t go on with this anymore because it’s lonely and nobody understands what it feels to be trapped in your own body.’

Victoria claims both NHS and private hospitals in Northern Ireland have denied her the procedure she needs, which she understands is due to an ongoing investigation into suspended Belfast neurologist Dr Michael Watt, which has blocked access to certain neurological treatments. 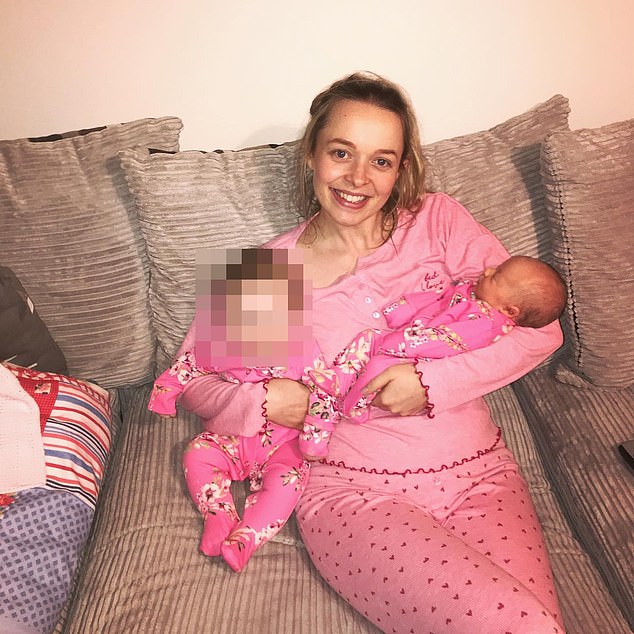 Victoria claims both NHS and private hospitals in Northern Ireland have denied her the procedure she needs, which she understands is due to an ongoing investigation into suspended Belfast neurologist Dr Michael Watt, which has blocked access to certain neurological treatments

In 2019, a BBC Spotlight investigation revealed Dr Watt, who worked at the Royal Victoria Hospital as a neurologist diagnosing conditions including epilepsy and Parkinson’s, carried out hundreds of unnecessary procedures on patients.

What is a CSF Leak?

A cerebrospinal fluid (CSF) leak is an under-diagnosed, yet often debilitating, medical condition comprising a small tear or hole in the outer membrane that contains the fluid surrounding the spinal cord and brain (known as the dura mater).

When the fluid leaks out of the dura at spinal level, the overall volume and pressure of fluid within the skull drops (known as intracranial hypotension), its cushioning effect is reduced and the brain slumps. This slumping effect, also called ‘brain sag’, results in severe pain, pressure, blurred/double vision, eye pain, neck pain, hearing impairment, tinnitus, spasm, seizures and a wide range of other symptoms.

A CSF leak occurring at cranial level is thought not to trigger intracranial hypotension, but nonetheless can give rise to a variety of symptoms, such as headache, visual disturbance and changes to hearing or ringing in the ears, as well as external CSF discharge, commonly to the throat and nose.

In particular, Dr Watt was found to be behind a huge spike in the number of epidural blood patches – a rare neurological treatment, usually for patients with a condition called spontaneous intracranial hypotension – carried out in the Belfast Trust in 2015 and 2016.

Victoria told the Mirror her local hospital is able to do the procedure which will help her, but there’s ‘no point’ in going there because they won’t.

She said having no faith in her country’s health system is ‘really, really scary’ and ‘lonely’.

Victoria was due to return to her job at a GP surgery following maternity leave last month, but she’s now been signed off because she is unable to stand upright for long periods of time.

Due to Covid-19 restrictions, Victoria said they can’t even have someone round to help them clean their house or keep her company.

She admitted she feels like their lives have been turned upside down and are on pause while they wait for treatment.

Earlier this month, Curtis set up a GoFundMe page, and they were stunned when it raised nearly £10,000 – enough to cover the private healthcare cost for three blood patch procedures.

With their home country out of the question, a private neurosurgeon and CSF adviser in Aberdeen has offered to treat Victoria when a space comes free.

Victoria now faces the prospect of having to lie flat during the crossing on the boat to Scotland and the five hour car journey that follows.

They are unable to fly because the air pressure could cause the patch to rupture.

Thankfully the amount they have raised will cover the expenses, and any extra funds will be donated to the CSF Leak Association charity. 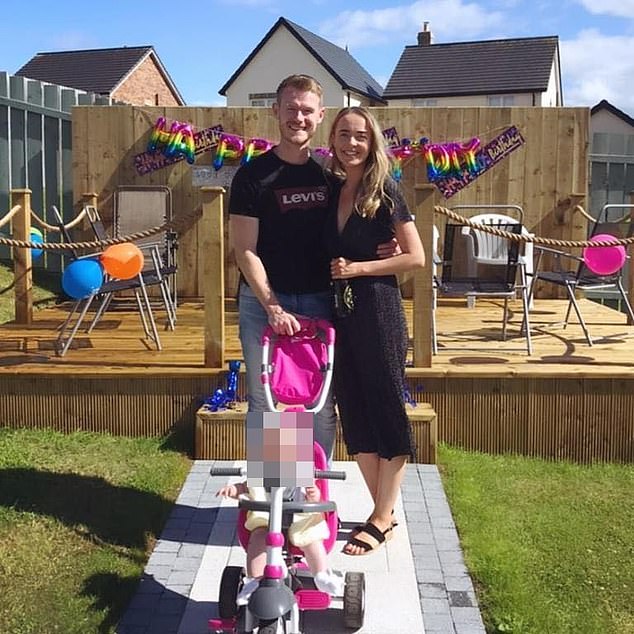 Due to Covid-19 restrictions, Victoria said they can’t even have someone round to help them clean their house or keep her company

Victoria said there’s no guarantee she won’t suffer another rupture in the future, and wants people in the same situation as her who have been denied access to treatment to keep pushing for it.

A spokesperson for the hospital trust told The Mirror: ‘This patient has been reviewed and referred for further review and ongoing treatment to a specialist in the Southern Health Trust so it would not be appropriate for us to comment further on her treatment. Funding for treatment in GB is managed by HSC Board.

‘Currently there is no commissioned Low CSF Service in Northern Ireland. This area of practice has been under review through the Independent Neurology Enquiry, following on from the Neurology recall of Dr Watt’s Neurology patients.’