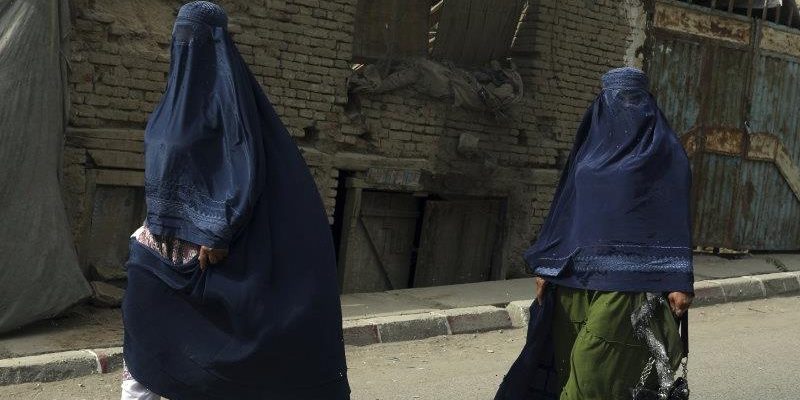 Review: Two Afternoons in the Kabul Stadium: A History of Afghanistan Through Clothes, Carpets and the Camera, Tim Bonyhady, Text, $34.99

The Taliban’s capture of Kabul and the virtual storm of images from inside Afghanistan, make Tim Bonyhady’s Two Afternoons in the Kabul Stadium timely. It also raises questions about uncritical presentations of a complex, war-torn country.

Its sub-title suggests a different form of story-telling, relating Afghanistan’s history through a diverse range of artefacts including photography, film, paintings, sculpture, cartoons, posters, clothes, carpets, postage stamps, banknotes, flags and the symbolic use of colour. But with only 21 images, the book remains text-heavy, the reader having to make do with Bonyhady’s descriptions and interpretations. The images are interspersed in a presentation of Afghan political and social history since the late 1920s built around a series of well-told stories. 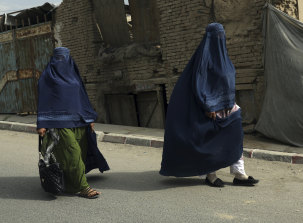 Two Afghan women walk along a street in Kabul. Tim Bonyhady sees women’s dress as the image of modernity.Credit:Rahmat Gul

This promise of a different form of storytelling is quickly contradicted. Bonyhady opens with a description of a Muslim warrior taken from an old adventure travel book. This warrior is a man who “goes wild with religious fanaticism and starts out determined to kill an unbeliever”. Bonyhady does not mention that the author of the description was a well-known purveyor of Orientalist shows and writings in the early 1900s. Uncritical reintroduction of such Kiplingesque fantasy in the public discourse is particularly unfortunate at a time when Afghanistan is in a transition period that requires careful and nuanced responses..

The title references two events in the Kabul stadium: one in 1959 when elite women in the royal pavilion removed their headscarfs in a public gesture of reform; the other in 1999 when a woman accused of murdering her husband was executed in a public spectacle of Taliban justice. So, the theme of modernism versus barbarism is pursued as the axis on which Afghan history turns, complete with savage tribes, fundamentalist mullahs, public hangings and revenge killings. Violence is evenly attributed to almost all political regimes until the Taliban were defeated in December 2001, when Bonyhady’s story also ends.

The book’s premise is that images are powerful conveyors of meaning. This is particularly so when they portray dramatic, foreign scenes, and Afghans have long been presented in such Orientalist manners as the exotic “other”. The mujahideen, for one, were famously photogenic as the “noble savages” defying the Soviet army. And who has not seen photos of Afghan women in blue burqas usually accompanied by a subtext on the oppression of women.

Bonyhady partly calls out the misuse of images as simplified messages, but the call is muted by the overwhelming impression that his book reinforces precisely such stereotypes, especially as they relate to women.

He focuses on women’s dress (the flapper, the miniskirt) as the central image of modernity. Its contrast is the burqa or the headscarf, for many in the West synonymous with women’s oppression under Islam, ignoring the agency of the wearer who often chooses it for social protection and as an affirmation of identity and religion. Women’s dress is at any rate an overused and flimsy symbol to describe Afghan women’s extraordinarily complex situation – about which the reader learns very little.

Afghan history certainly has its share of collective violence. But why focus so heavily on these events? What are the criteria for selection? And why describe the violence in voyeuristic detail? Do we really need to know that the man who photographed former President Mohammad Najibullah’s body hanging from a street post in Kabul was so close to the event that the blood on the ex-president’s mutilated face had not yet clotted?

Afghanistan is so much more than the public spectacles to which Bonyhady seems drawn and which Afghans have begun to call out, especially when related by external observers. On Twitter, until recently, Afghans were sharing images of cultural artefacts, national dress, and beautiful landscapes with a reference to “Afghanistan so beautiful”. There are street artists inspired by Banksy trying to bring beauty to the concrete blast walls put up by Western forces and embassies. A leading artist, Shamsia Hassani, sees her art as a vehicle to give “Afghan women a different face, a face with power, ambitions and willingness to achieve goals”, inclusive of veil and burqa.

Bonyhady didn’t visit Afghanistan but worked through mostly Western sources. That may explain why his book tends to reinforce Western stereotypical images of the country.