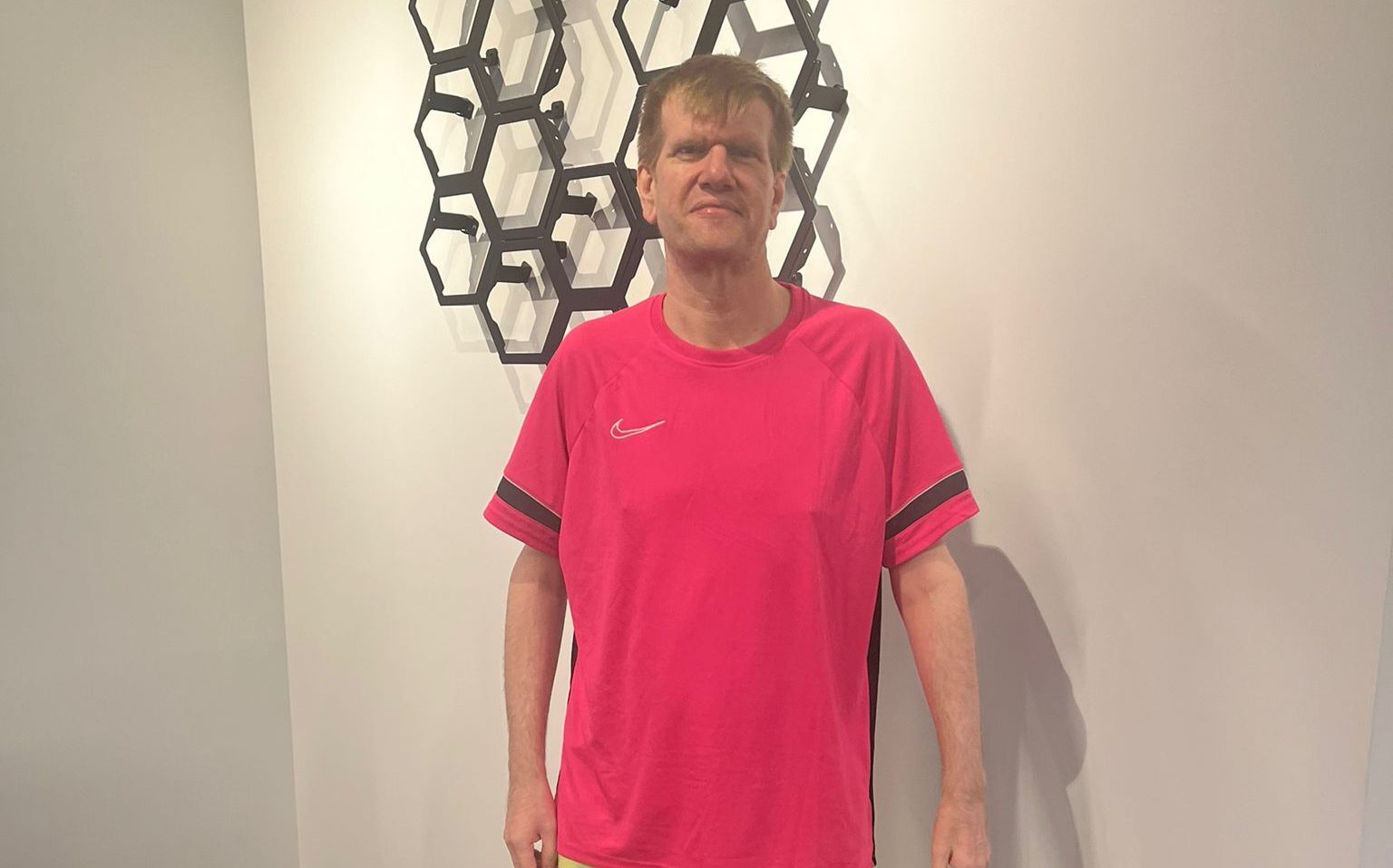 I wish I could lose some weight,’ I confided in Kirsty. ‘It’s just so hard to eat healthily.’ She nodded sympathetically.

I hadn’t known Kirsty for long but we’d clicked instantly when we’d met at work. She was so easy to talk to that I found myself opening up to her about my problems.

I hadn’t always been big. In fact, as a child, I’d loved sport, and had been fit and healthy.

But then, at 14, I’d suffered a knee injury while playing rugby at school.

It was agony. Doctors didn’t know what the problem was and despite the fact that I could walk most of the time, it would buckle at random moments.

For years I was misdiagnosed, told it was growing pains caused by my gait and a natural softening of the knee cap.

It wasn’t until 1997 that I underwent keyhole surgery and it was discovered that the injury when I was 14 had dislodged my knee cap.

This impacted the ligaments, muscles and tendons, meaning they had to be operated on, too.

The op happened two years later, while I was in my early 20s and at university. It wasn’t simple and after, I developed blood clots and a small cut on my leg turned into an ulcer.

Trapped in bed and in constant pain, I became addicted to my prescription painkillers and the year I was meant to take off to recover turned into eight.

My mental health was rock bottom – and so was my physical health.

I lived on takeaways and junk food so it was no surprise that my weight ballooned.

In 2012, I had skin grafts to help my leg heal and the following year, I had more surgery.

About the same time I was diagnosed with diabetes and told I needed to change my diet.

The bad habits were too deeply ingrained by then, and I lived on takeaways, thinking nothing of consuming 9,000 calories from Dominos, just for dinner.

At this point I was living on my own, and sought help from a very good GP who gave me support for the painkiller addiction – they advised a staged withdrawal over the course of about a year, which I was able to do.

Then, in 2017 I got a job within a management consultancy.

I felt self-conscious about my size, nervous because I would be meeting new people.

On my first day I met my colleague, Kirsty.

Kirsty was down to earth, plain talking and blunt when needed but not in a nasty way.

As I got to know her better I discovered she was kind, compassionate, and very funny.

She was an excellent listener too and so I’d often talk to her about wanting to lose weight and eat more healthily.

Kirsty was concerned about my weight, and gave me tips about healthier eating too, in the hope it might kickstart a change in my diet.

Because I lived on my own, during the lockdown, Kirsty and her husband kindly invited me into their support bubble and I stayed with them a few times.

It was a lifeline but, as she served me chicken with vegetables or stir frys for dinner, it made me realise how unhealthy my eating habits were – and how big I had become.

Then on 18 May 2021, I was at home one morning when I received a WhatsApp message from Kirsty.

‘I dreamt you had your leg amputated because you’re so overweight and your diabetes is out of control.’

Looking at the words, I realised how easily Kirsty’s dream could turn into reality. I wasn’t offended. In fact it was the kick I needed to change my life.

I enrolled on Weight Watchers online and at that point I was 20 stones 6lbs – far too heavy for my 6ft 4 frame.

Fortunately I didn’t have to get weighed in front of anyone because I did it through their online app.

I began to make immediate changes to my diet, but I’d been living on takeaways for so long that I didn’t actually know how to cook healthy foods.

So I messaged Kirsty. ‘What can I cook that’s healthy?’

‘Chicken, vegetables, lean protein,’ she suggested. She was always there to offer support and advice and having her at the end of the phone was invaluable.

I changed everything about how I saw and how I ate food so that it would be sustainable, cutting back on deliveries and microwave meals.

For breakfast I would have eggs or a couple of slices of toast with marmite. For lunch I would have a bowl of soup but without bread or cheese, which previously I’d have consumed in large quantities.

Instead of giving up the chocolate and crisps that I enjoyed, I swapped the high-calorie versions for lower-calorie alternatives such as McCoys for Quavers, and Mars bars for Weight Watchers bars.

Essentially, I learned to cook from scratch using fresh ingredients.

One day I made a pitta filled with chicken and vegetables and it tasted horrible, so I was straight on the phone to Kirsty asking for a reason why.

Turns out I had undercooked the chicken and used too much salt!

In the first week I lost 10 pounds, and after just a month I had lost 1 stone 6 lbs.

Some weeks I lost as much as 7lbs – it felt incredible!

Inspired, I stuck at it and the weight was coming off so fast that I had to keep buying new work clothes.

When I went into the office for the first time after lockdown, I looked so different that some of my colleagues didn’t recognise me.

I’ve dropped from wearing tops that are 3XL to XL; I’ve lost nearly 10 inches off my waist; I’ve reversed my diabetes and I’m not taking painkillers any more.

I’m very happy with the weight loss but I feel I’ve got about 5 lbs more to go.

But more than just the physical change, mentally the transformation has been huge.

I go to the gym six evenings a week and really enjoy exercising. My confidence and self-esteem has rocketed and I no longer put my head down when I walk down the street.

For the first time in over 20 years, I feel in the right frame of mind to start dating too.

I haven’t joined any particular apps yet but I plan to start in the New Year.

I really can’t thank Kirsty enough, because it’s thanks to her dream and continuing support that I’m where I am today.

As told to Rachel Tompkins