A mother-of-two has revealed how having labial filler has revived her confidence – and her sex life.

Audrey Simmons, 41, from Twickenham, went through the early menopause after undergoing cancer treatment in 2017, and having her ovaries and Fallopian tubes removed.

The estate agent, who is mum to two children aged seven and four, had already suffered severe tears during child birth, and this coupled with the early menopause meant she experienced excessive dryness – affecting her sexual relationship with her husband Daniel.

After deciding to try the treatment, Audrey says she feels better than ever, and believes it’s the ‘lunchtime answer’ to boosting things in the bedroom department.

The new £800 procedure claims to boost women’s sensitivity by increasing the surface area of the G-spot, inprove ‘hydration and elasticity’, and lasts up to 18 months, taking half an hour with a local aesthetic. 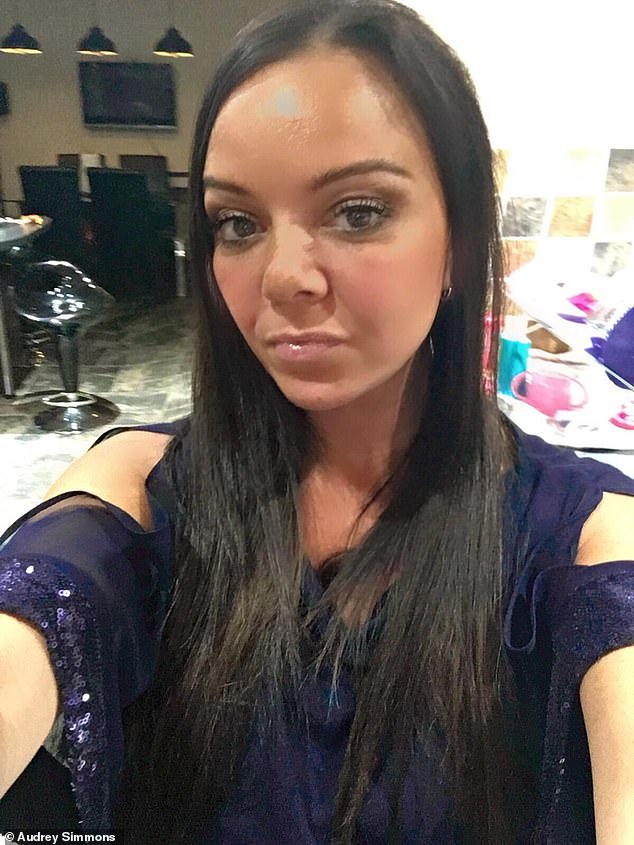 Mother-of-two Audrey Simmons, 41, from Twickenham, revealed how having labial filler has revived her confidence – and her sex life

Speaking about her decision to undergo the temporary treatment, she said: ‘I decided to have the treatment because of what happened to me when I gave birth to my first child.

‘I had to have forcep assistance which left me with severe rips and tears. I tried not to let it bother me, but it was.

‘It was affecting my body confidence and my sex life with my husband. The fact I was getting older wasn’t helping either.

Revealing the thought process that led up to her decision, Audrey explained: ‘I just wanted to make myself feel better.

‘I was also diagnosed with breast cancer in 2017 and lost a lot of confidence going through my cancer treatment because I had to have my ovaries and tubes removed because of the cancer treatment. 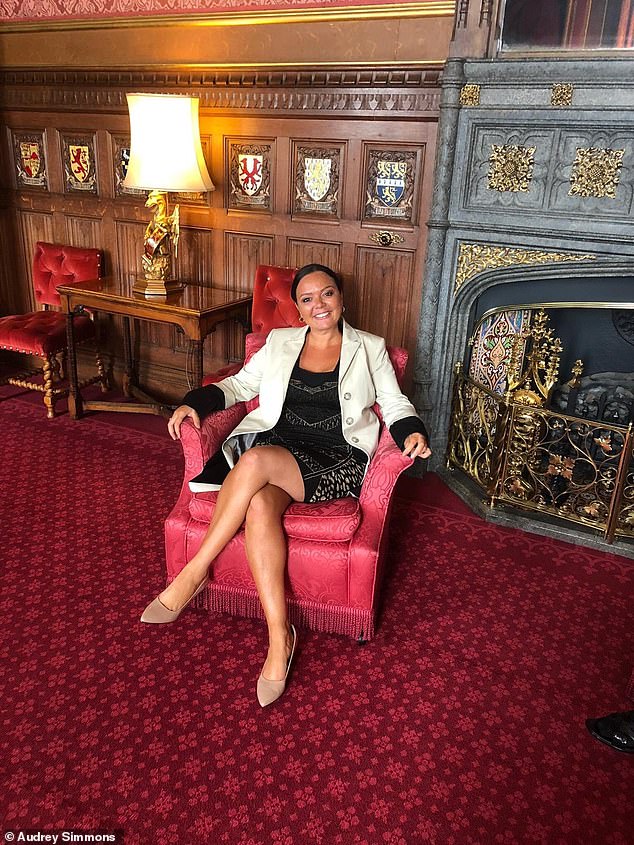 The estate agent, who is mum to two children aged seven and four, had already suffered severe tears during child birth, and this coupled with the early menopause meant she experienced excessive dryness – affecting her sexual relationship with her husband Daniel

‘This led to early menopause which made me really dry. I felt that the premature menopause combined with the childbirth damage and my age just wasn’t making me feel sexy and my sex life with my husband was definitely being affected.

‘I like being intimate with my husband, but the dryness was making it really uncomfortable – I’m only in my forties so I didn’t want this to carry on forever.’

She continued: ‘I was reading an article about having fillers in crazy places and discovered a French filler company called VIVACY that had a special dermal filler for the vagina.

‘I read it helped with hydration, tone and plumpness. It also helps with sensitivity down there which in turn helps you reach climax. Basically, everything I needed.

‘I really had no idea there was such a thing. The filler is called Desirial – so it didn’t sound too scary. 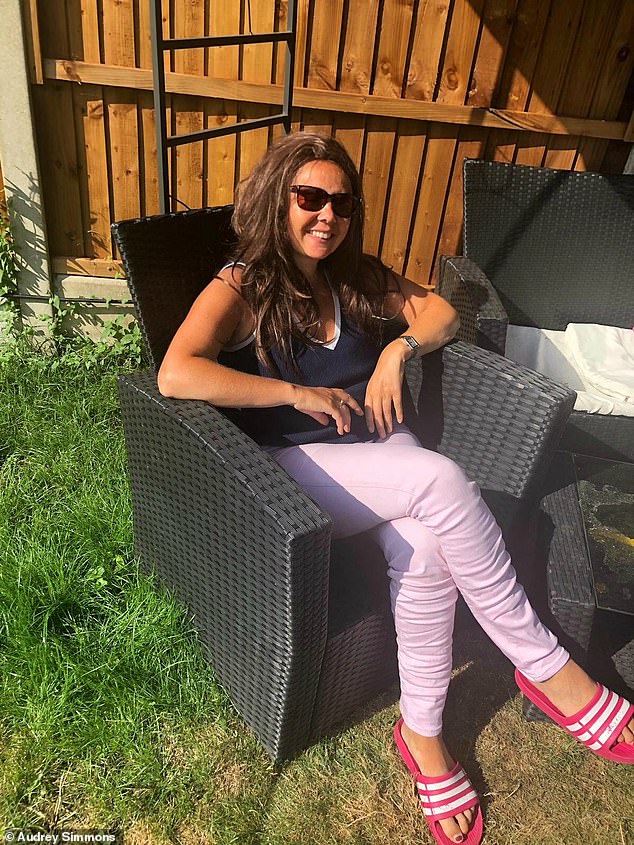 After deciding to try the treatment, Audrey says she feels better than ever, and believes it’s the ‘lunchtime answer’ to boosting things in the bedroom department

And despite her intention to improve things in the bedroom department, Audrey admitted her husband Daniel was hesitant.

‘I spoke to my husband about having the filler, but he couldn’t understand why I was having it done. He said, ‘how would you feel if I went to get a penis enlargement?’.

‘I obviously said it’s a completely different thing as it’s not an enlargement. I think it was just an inferior, male thing’, she said.

Speaking about getting the filler done, she revealed: ‘I went to Real You Aesthetic Clinic in Twickenham and discussed my issues with Dr Kathryn Barnes.

‘She began by injecting the labia with local aesthetic which initially really stung – but only for about five seconds.

‘She said this numbs the labia to allow the filler to be injected and massaged with minimal pain. I was given some balls to squeeze on for that bit which helped.

‘I was surprised how quickly the whole thing was, it took around half an hour maximum.

‘I was still able to text on my phone, send emails and even answer work calls whilst I was having the procedure done. I think you could even get it done on your lunch break and their colleagues would be none the wiser.’ 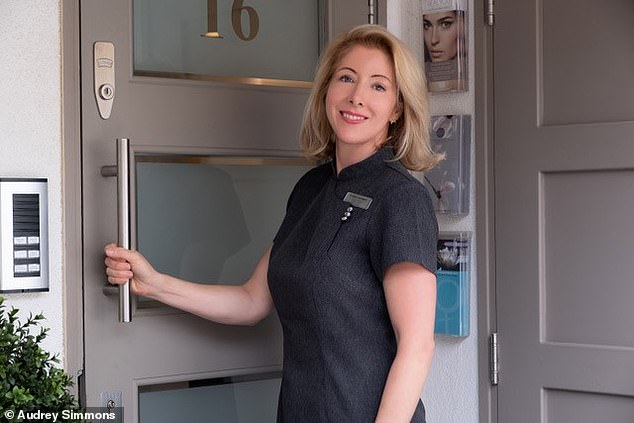 Audrey had the new £800 procedure with Dr Kathryn Barnes (pictured) which claims to boost women’s sensitivity by increasing the surface area of the G-spot, inprove ‘hydration and elasticity’ and lasts up to 18 months, taking half an hour with a local aesthetic

And Audrey says that both she and her husband feel their sex life has been given a new lease of life.

‘Since the procedure things definitely feels puffier! I had filler in my lips previously, and it’s the same thing really – I just thought why not. I wanted to see if it would spice up the sex life at home too.

‘It’s boosted my body confidence massively! When I saw the before and after images I was over the moon! It’s only a very slight, subtle change but it definitely looks younger and fuller. I feel more cushioned when I’m sitting down now too!’.

Speaking about the down time following the treatment, she added: ‘I had to avoid having sexual intercourse for five days after the treatment to let it heal but now, almost two weeks later, I can definitely say it has made a difference.

‘It has massively helped with the dryness – I feel like a new woman. The hydration and puffiness can last up to a year and a half which is great.

‘With my cancer treatment the dryness may return but I would not hesitate to get the filler down there again.

‘I think it’s actually brought me and my husband closer together – sex with your partner is an important thing within a relationship and I’d missed that closeness.

‘I don’t think he thought it would impact down there as much as it has – but he’s certainly happy!’.

What is the VIVACY labial filler treatment?

Who is it aimed at?

Women who have experienced childbirth, the menopause, collagen loss, or scarring.

What is it for?

The procedure is aimed at women who are complaining of dehydration, damage, loss of volume or aging to their vagina.

The treatment claims to enhance the intimate area by injecting temporary filler into the labia majora (the larger outer folds of the vulva).

This aims to increase the region of the G-spot, as well as boosting hydration and elasticity.

How does it work?

The treatment takes around half an hour and begins with an injection of a local anesthetic to numb the area, before the filler is injected to the labia majora.

How much does it cost?

From £800 depending on amount of restoration needed and quantity of product used.

How long does it last?

Desirial lasts six to 12 months and Desirial Plus up to 18 months.

What is the aftercare?

Mild discomfort can occur for a few days, swelling is to be expected for up to 10 days, and the product softens over two weeks.

What do the fillers contain?

Dr Kathryn Barnes told Femail: ‘Dryness inside the vagina is often a side effect of menopause as the hormone levels drop, and the skin suffers.

‘Desirial Plus from VIVACY- a Hyaluronic Acid filler gel specialty formulated in France to be and licensed for injection inside and around the vagina.

‘They are unique in that they are a cross linked hyaluronic acid gel which contains added Mannitol – an antioxidant that acts to stabilise the inflammatory process which occurs when the needle penetrates the skin and thus reduces the swelling post procedure.

‘They are formulated to improve texture and elasticity and fine lines in the genital area, as well as injected internally just inside the vagina which can dramatically help with improving hydration.’