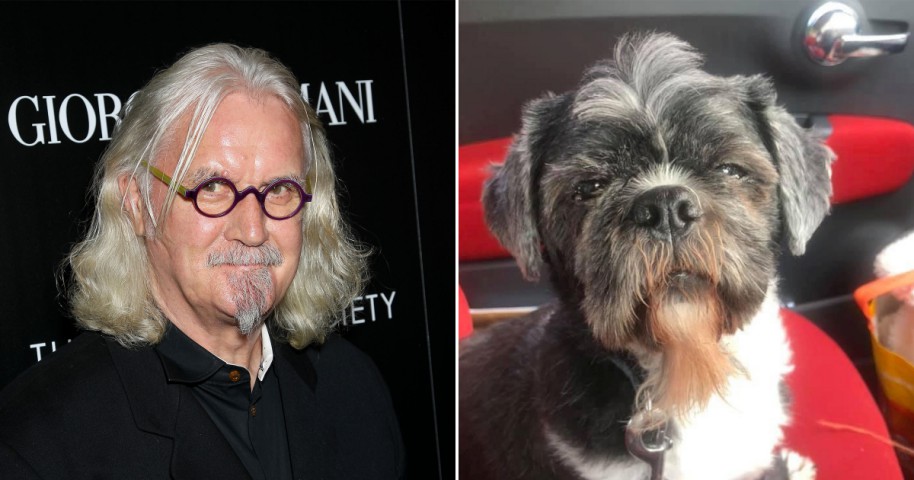 A Manchester woman is convinced her little bearded dog is a dead ringer for Billy Connolly.

Sally Maher was first told by a friend that her Shih Tzu, Noddy, was the spit of the comedic legend after the little dog went to get a short summer cut earlier this year.

Noddy 13, has a tuft of fur on top of his head, which mirrors his long goatee-esque beard and moustache.

Since he got that haircut, Sally, 48, says she regularly clocks people gawping at her little pal while they’re out for walks.

The cleaning business owner says her ‘little celebrity’ loves the attention, and will often insist on stopping to lap up the attention and fussing.

Sally, from Oldham, Greater Manchester, calls the resemblance ‘uncanny’, adding: ‘One of my friends commented and mentioned that he looks like Billy Connolly, everybody says he does.

‘Everybody knows Noddy where we live, he’s like a little celebrity. He’s well known because of his haircut.

‘He gets his hair done at The Dog House in Lees, Jan specialises in his haircut.

‘We just ask for his spiky and beard look – it’s a summer cut, and he loves getting it done.

‘With it being warmer now he gets his hair cut every five weeks.

‘When we were in Cornwall last year this little boy came past and went “mummy that doggy’s got a beard” and she went “oh don’t be silly”.

‘Then she saw him and went “oh yeah”.

‘He gets lots of attention wherever he goes. You can’t just walk past somebody, you’ve got to stroke him. He’s a little people pleaser, he’s absolutely gorgeous.

‘When he’s all furry he looks like an Ewok from Star Wars – it’s two totally different looks.’

The mum-of-two said despite looking like a comedian, the little guy’s spirit is more like that of a different ‘wise soul’.

She said: ‘He reminds me of Mr Miyagi from The Karate Kid.

‘He’s the loveliest dog in the world, we also have his daughter Rosie who lives with us, and she drives him crackers.

‘He’s got a funny side to him, and he’s treated like royalty with his little knitted blankets and pillows.

‘He deserves nothing less, I love him – everybody does.’