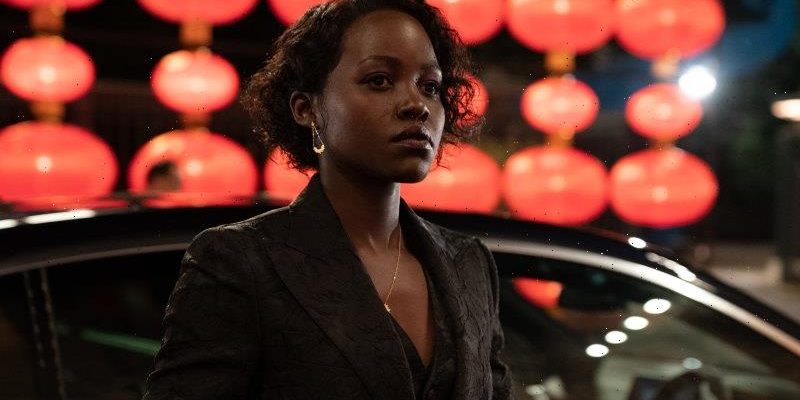 A key action movie motif is the choreography of the chase. Typically, it involves cars, trucks, buses or other lumps of mobile heavy metal but purists like Tom Cruise often prefer the unadorned variety – sprint and dodge marathons elaborately arranged as obstacle courses with hapless bystanders serving as collateral damage.

This is the formula favoured by Simon Kinberg, director of The 355, a post-feminist spy thriller in which the best stunts are all-female affairs. Some of these are appropriated by the extraordinarily adaptable Jessica Chastain. 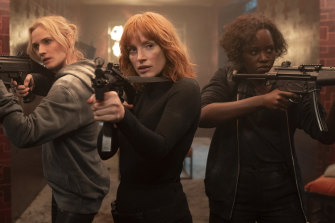 Diana Kruger (left), Jessica Chastain and Lupita Nyong’o star in The 355. Like the Bond and Bourne movies, this one is out to make the most of the word, escapism, by combining suspense with a little tourism. Credit: Supplied

For her next trick, she’s playing a television evangelist in The Eyes of Tammy Faye, opening soon. She also initiated and produced this film, while leaving plenty for her fellow leads, Diane Kruger, Penelope Cruz, Lupita Nyong’o and Fan Bingbing, to work on.

The group is up against a large cast of perfidious males who happen to be firmly entrenched in positions of power, so constant movement is guaranteed. 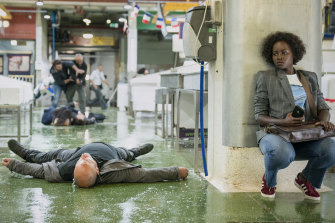 Lupita Nyong’o as Khadijah is an MI6 cyber whiz in the Simon Kinberg directed The 355.

But first the women must decide whether or not to trust one another. This ought to be easy since most of them have been working for supposedly friendly intelligence agencies but movies taught us long ago that the spy trade regards loyalty as a slippery commodity, and in this case, the agencies are all after the same thing. The plot device or MacGuffin, as Hitchcock would have called it, is a Kindle-sized weapon of cyber destruction invented by the son of a Colombian drug baron.

It is about to fall into the hands of an international arms dealer when it’s stolen by a Colombian intelligence operative gone rogue.

The CIA’s “Mace” Browne (Chastain) is about to buy it from him when Kruger’s Marie Schmidt, a German agent, steals her bag of cash before the deal can go through. Mace pursues her and the first chase sequence takes off, creating a modest amount of havoc in the streets of Paris.

The toughest in the crew, Chastain and Kruger enjoy baiting one another even after their differences are settled, while Cruz, a psychologist with Colombian intelligence, is a reluctant recruit who prefers a quiet life, and Nyong’o, an MI6 cyber whiz, is along only because Chastain has persuaded her that she can’t succeed without her.

Like the Bond and Bourne movies, this one is out to make the most of the word, escapism, by combining suspense with a little tourism, so the itinerary is wide-ranging.

We glimpse Colombia, Paris and Morocco, among other stops, before a glamorous climax in Shanghai involving a bruising martial arts battle performed, Bond-style, in evening dress.

There’s nothing here that Angelina Jolie and Scarlett Johansson haven’t done already but Kinberg and his nimble cast achieve such momentum that you’ll probably shelve your reservations until it’s all over.