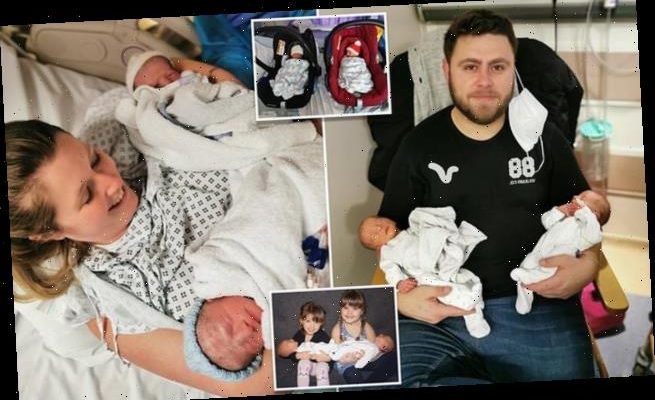 A mother has revealed how she had to give birth to her premature twins without her husband by her side following two ‘inconclusive’ Covid-19 results.

Rachel McCartney, 33, from Aldershot, didn’t meet one of her twin boys, Ellis, until he was six days old while she remained quarantined in a separate room.

The mother-of-four wasn’t allowed to have her husband David at Frimley Park Hospital, Surrey, at the birth of Ethan and Ellis because he was also isolating at home with their two older daughters Alisha, four, and Freya, two.

Rachel spent 10 days in isolation in total, and was induced four days into her quarantine period on January 7, when she was 34 weeks pregnant. 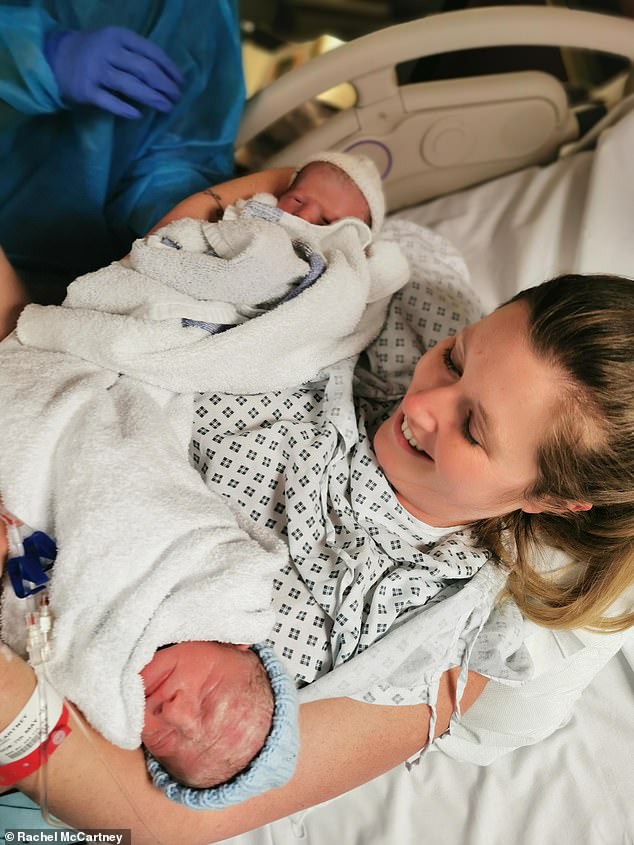 Rachel McCartney, 33, from Aldershot, had to give birth to her twins prematurely in isolation on her own at Frimley Park Hospital, Surrey, following two ‘inconclusive’ Covid-19 results 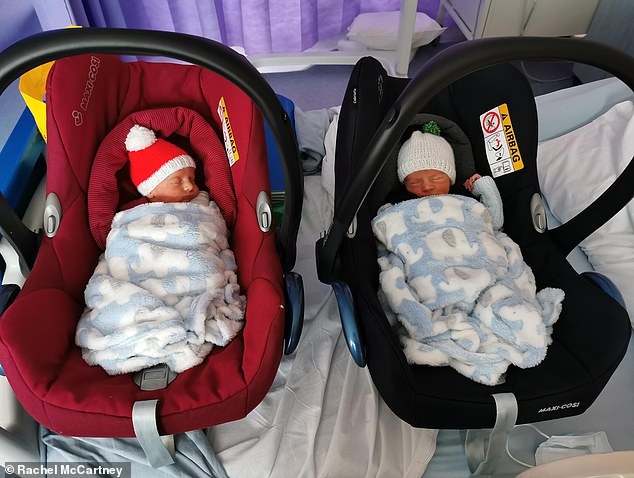 She was in isolation at the hospital for 10 days, and was induced four days into her quarantine period on January 7, when she was 34 weeks pregnant

Rachel originally went to hospital for reduced movements and, while hospital staff wanted to keep her in, they didn’t have enough beds available.

She was told to come back the next day for monitoring, when staff decided she needed to be admitted to hospital.

Rachel was tested for Covid-19 and the first test came back with an ‘inconclusive’ result, with the repeated test coming back with the same.

She told Femail: ‘Because I had the two inconclusive tests they treat you like you’ve got a positive test.’ 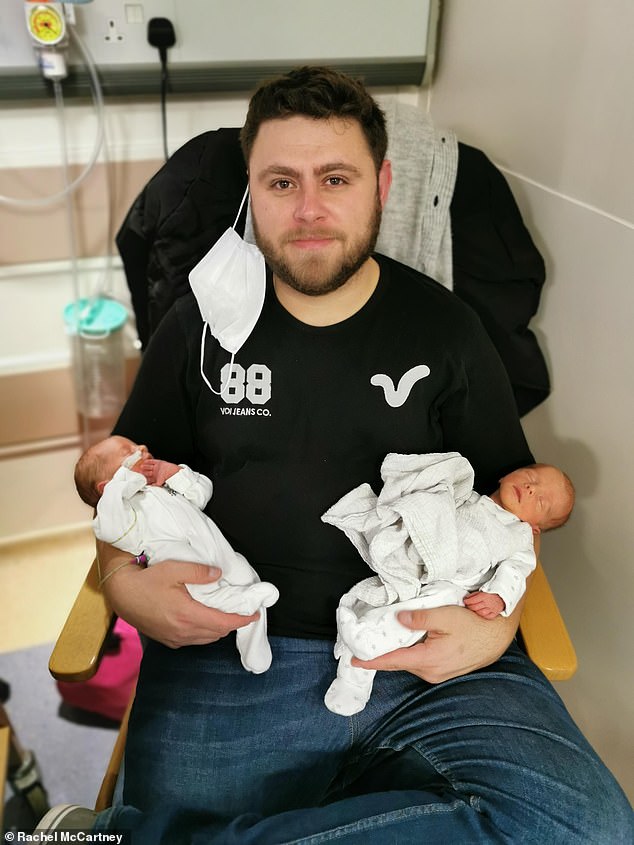 The mother-of-four wasn’t allowed to have her husband David (pictured) at Frimley Park Hospital, Surrey, at the birth as he was also isolating at home with their two older daughters Alisha, four, and Freya, two

Rachel added: ‘It means that you have got part of the Covid virus in you but not the full amount.

She wasn’t allowed to have her husband with her during the birth four days into her isolation period and she also wasn’t allowed her mother or sister there either, because of the risk that she was infectious.

Rachel, who was terrified of having a Caesarean section, was told that it would be too dangerous for the twins to be induced because one of the baby’s heart rate had dropped.

She said: ‘I was told I was going to be induced and then I got told that it was too dangerous for the babies to be induced so they would give me a C-section.

‘Then on the day of my C-section, another consultant came in and spoke to me and said they didn’t know why i was having a C-section, that I could quite happily have an induction without any risk to the babies.

‘So the C-section was then cancelled and I was induced.’

Rachel said that she was confused because of being told different things over two days, saying it ‘was a bit of an emotional rollercoaster’.

She added: ‘I was terrified of having one anyway, but to have one by myself with nobody there to support me was just absolutely awful and made me feel quite anxious.’ 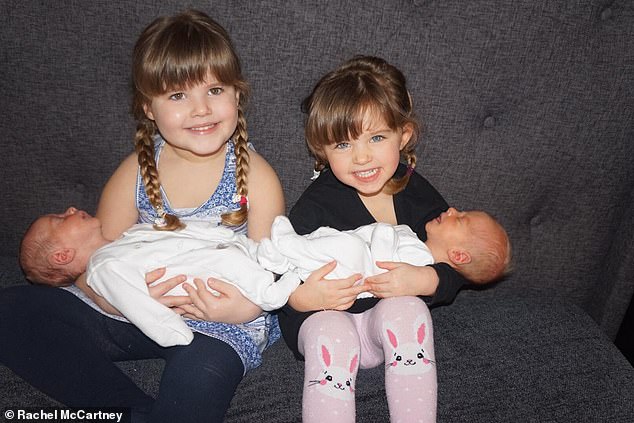 Rachel is now at home with her husband and children, and said they’re trying to get into ‘some sort of normality and some sort of routine that doesn’t involve sitting on the sofa feeding babies all day’ (Pictured: Alisha and Freya with their brothers Ethan and Ellis)

Rachel said: ‘Ethan stayed with me because he was absolutely fine but Ellis was taken to neonatal because he just needed a little bit of help with his breathing.

‘So I literally saw him for about two minutes and then he was whisked off to neonatal and I didn’t get to see him until he was six days old.’

She added: ‘They do have an app thing that you can download and they send you videos of the babies, which was quite nice to be able to see him. But it was also quite upsetting to know that he was in there by himself.’ 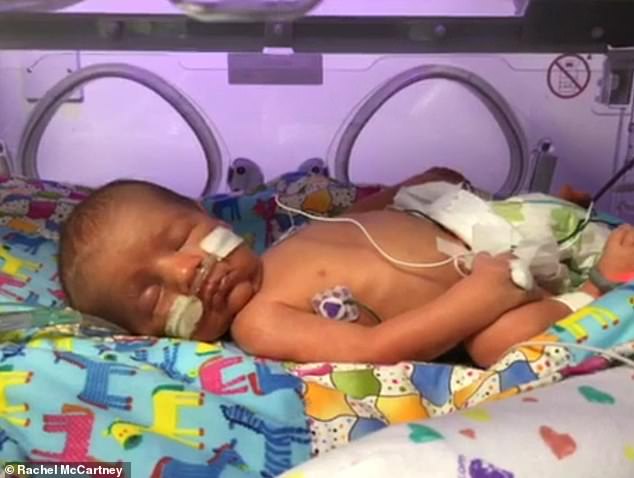 Ethan, who weighed 5lb 1oz, had to go to the neonatal ward to receive ‘some help with his breathing’, and Rachel didn’t get to properly meet him until he was six days old 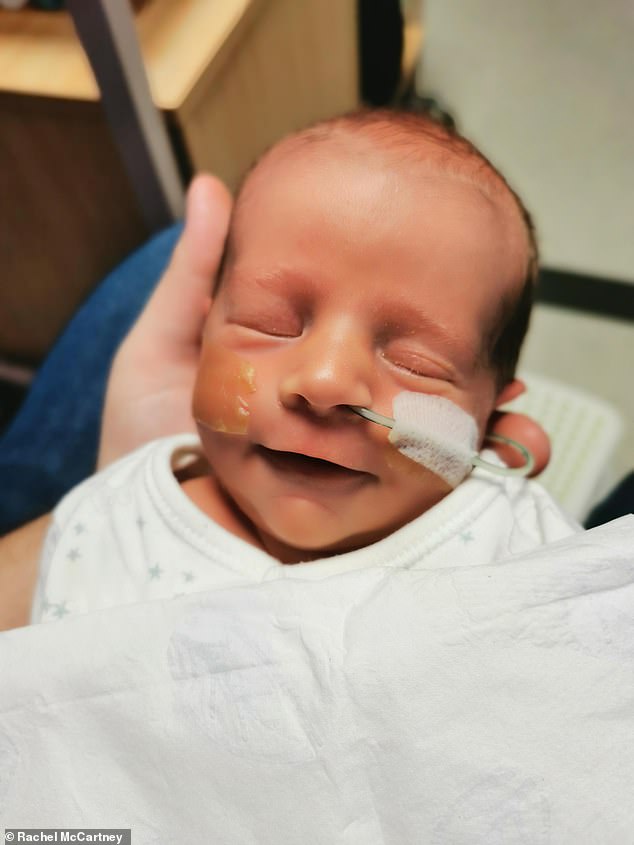 Rachel said she was able to see Ellis while she was isolating via an app, where hospital staff could send videos of the babies in the neonatal ward

The mother said that she asked David to get a Covid-19 test and then asked whether he could spend time with Ellis in the neonatal ward, but said that ‘he still wasn’t allowed’.

Rachel said that she could ring David when she wanted to, but ‘he found it quite frustrating’ because he was receiving information secondhand and not hearing it from the consultants.

She added: ‘When he found out I was having the C-section he was quite concerned because he knew how terrified I was of having one anyway, and to be getting the information secondhand from me I think he found it quite annoying – obviously I probably missed out things that I was told.’ 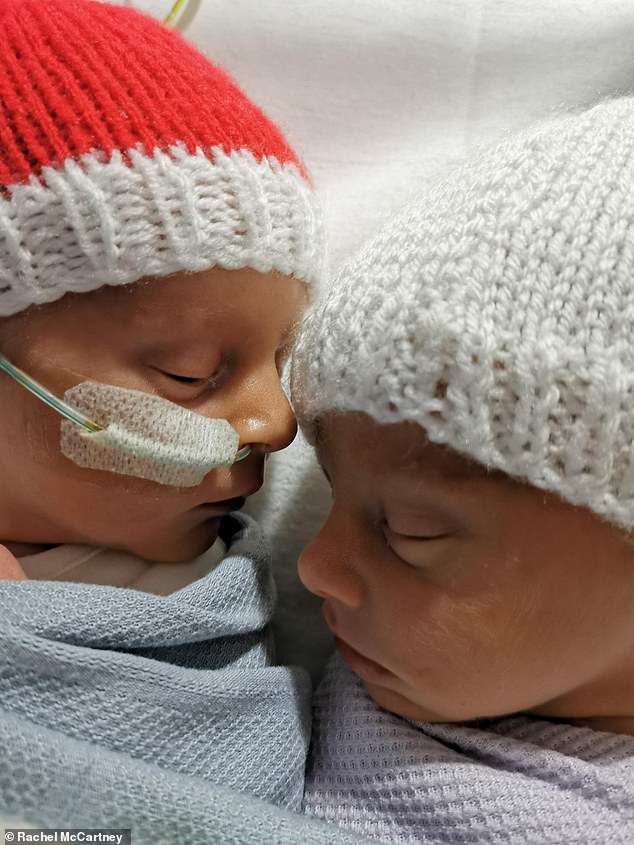 Ethan, who weighed 5lbs 3oz stayed in the room with his mother, and both babies have now been reunited and are at home

Rachel is now at home with her husband and children, and said: ‘We’re just slowly trying to get into some sort of normality and some sort of routine that doesn’t involve sitting on the sofa feeding babies all day.’

She said: ‘The care I got from the midwives there was brilliant. I can’t fault any of the midwives.

‘They were amazing and the support they gave me was amazing as they were so lovely.’ 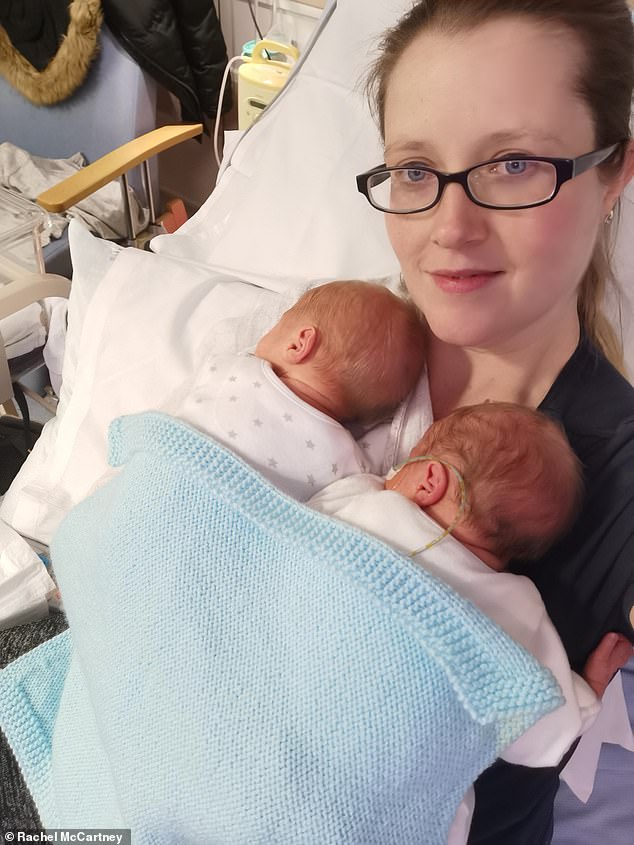 Rachel, who was terrified of having a Caesarean section, was told that it would be too dangerous for the twins to be induced because one of the baby’s heart rate had dropped, but was told by a different consultant she could be induced and didn’t have to have a C-section