There’s a gratifying complexity to Morning Wars’ depiction of workplace power and politics. The US drama series, which recently unveiled its second season (Apple TV+), looks sleek and shiny, but it’s artfully loaded with intriguing shades of grey. In its version of the pressure-cooker environment of a network TV morning show there are less likely to be heroes or villains than flawed and ambitious characters jockeying for position.

The compelling 2019 premiere season ended with a bombshell. Alex Levy (Jennifer Aniston), the strategic and generally self-serving co-host of the popular Morning Show, united with her on-air partner – newcomer Bradley Jackson (Reese Witherspoon) – to chastise their UBA network live on air for its handling of sexual-abuse allegations concerning the predatory behaviour of Alex’s long-time co-host, Mitch Kessler (Steve Carell). The network belatedly pulled the plug and shut them down. 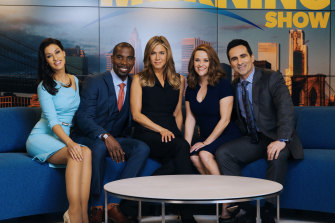 That season was distinguished by its nuanced treatment of issues of sexual harassment as it presented a range of relationships with varying power balances. Accustomed to fame and a position of authority, Mitch had used his clout to extract sexual favours, with tragic consequences for talent booker Hannah (Gugu Mbatha-Raw). A married father of two, he was also having an affair with producer Mia Jordan (Karen Pittman). But she wasn’t a young woman worried about the career consequences of refusing the advances of a more senior man: Mia was having sex with Mitch because she wanted to.

His behaviour also raised the question of Alex’s complicity: she’d been aware of his proclivities and turned a blind eye for the sake of peace and self-preservation. No one wanted to rock the boat on a successful show. Meanwhile, weatherman Yanko Flores (Nestor Carbonell) was involved in a romantic relationship with a younger production assistant. There was mutual attraction, but he became concerned about the appearance of impropriety and ended the affair.

A subject frequently dominated by the heat of outrage was here illuminated by a recognition of the nuances that can be involved. Mia seemed to sum up the drama’s perspective when she argued: “It’s not black and white … This shit is complicated.” 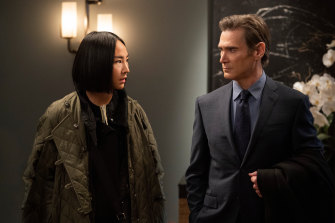 The second season, which is arriving in weekly instalments, picks up soon after the on-air explosion. Alex has quit, retreating to Maine with her cute new dog and writing an autobiography. Instinctively combative and sometimes self-sabotaging, Bradley has been working hard to please her bosses. While she prides herself on being a dogged newshound, she’s been playing nice for the network: dying her hair blonde; hosting prime-time bowling contests; singing and dancing on air with her morning-show co-host (Hasan Minhaj).

Beginning just before New Year’s Eve 2019-20, there’s a time-capsule quality to the season’s early episodes, which are set in a pre-pandemic world. There are reports of a virus in China, but that news is bumped from the rundown by stories about President Trump’s second impeachment and Harry and Meghan renouncing royalty. At this stage, when someone sneezes in the background during celebrations in Times Square, it’s a hint of the crisis to come. No one had heard of “social distancing”.

Meanwhile, Morning Wars continues its survey of personal politics. Alex, now applauded as a #MeToo champion, is endeavouring to keep details of her history with Mitch secret and, when she returns to work, busies herself apologising to people she hurt or betrayed. Mitch is in self-imposed exile in a waterside villa in Italy and seems reflective and remorseful. Yet, on this show, apologies don’t necessarily mean much. They might be sincere, but they could also be attempts to disarm the opposition so that the apologist can move on.

In that way, and several others, the drama resembles the equally addictive Succession, whose eagerly anticipated third season is due to land on 18 October (Foxtel, Binge). Both series feature groups of avidly ambitious people fighting for prime position in high-stakes environments. 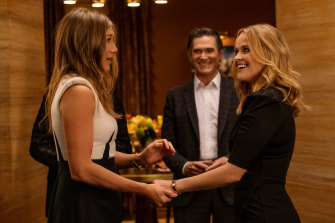 “They all want to win,” say Morning Wars′ director and executive producer Mimi Leder of her show’s characters, and the dynamics of their interactions are gripping. Bradley’s tough but not always pragmatic. She thinks she’s battle-hardened, having fought her way up from a local-news beat in West Virginia, but she’s a newbie in the Manhattan big league. The relationship between her and her sometime-ally, network CEO Cory Ellison (a perfectly cast Billy Crudup), is continually shifting. He’s a smooth operator, a wily silver-tongued manager who massages egos and manipulates people.

As in Succession, the plush, oh-so-civilised environments frequented by the characters – luxury homes and hotel rooms, swank restaurants – are at odds with the brutal behaviour inside them. A dinner party in Cory’s hotel suite for his staff reveals a fractious assortment of mistrustful guests harbouring deeply felt resentments. And again, as in Succession, their words can cut like daggers.

As it addresses the contentious subject of sexual harassment, the series also continues to probe related matters in this media hot-house, including the gap between public faces and private lives, and the compromises that characters are prepared to make to get ahead. It’s a fascinating study of power games.