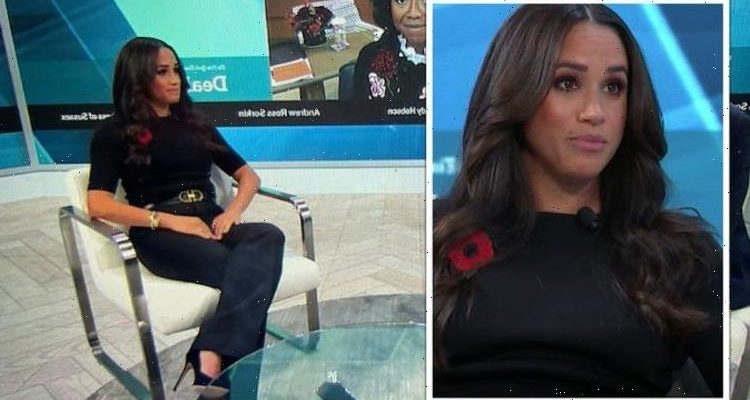 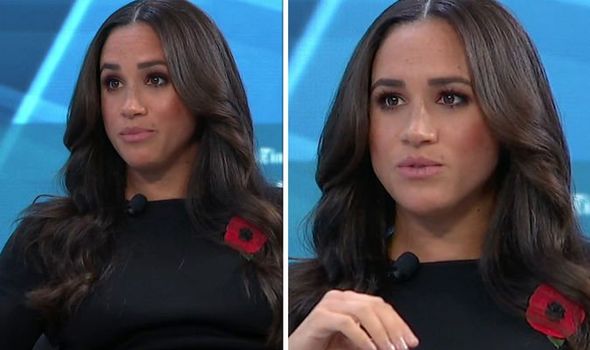 The Duchess of Sussex appeared at The New York Times’ DealBook online summit to discuss how women can achieve economic and professional parity. Meghan looked beautiful in an all-black look but a body language expert has analysed the meaning behind her speech.

Body language expert Judi James explained: “It was all going terribly well for Meghan who was confidently airing her credentials as a business guru alongside a corporate CEO and President Mellody Hobson.

“With the women speaking passionately and eloquently about business culture, with questions about women of colour as well as gender issues.

“Describing her business as a ‘small company’ that they are in the ‘process of building’ Meghan nevertheless looked very much the corporate leader.

“Sitting back in her chair with her legs crossed and her elbows propped on the chair arms to create the essential ‘upturned V’ gap under the armpits that signals power, confidence and status,” she said.

Judi continued: “Her gestures registered gravitas as she spoke, with her hands working around the upper chest zone, performing mime and illustrative gestures as well as some dramatic emphatic rituals.

“Meghan used precision gestures and counting rituals to add to her business leader impact as well as some steepling gestures and a pressing together of the knuckles with her hands curled into fists to suggest dealing with problems and potential conflict.

“Some of her gestures entailed wide-splayed arms and this expansiveness suggested high levels of experience and authority.

“She remained in that comfort zone talking about her own business but then the host suddenly and, it sounded, rather oddly referred to press rumours about how she was as a boss,” Judi said.

It was then when Judi suggested Meghan started feeling uncomfortable.

“Her reply ‘I urge you not to read the tabloids’ sounded firm, but the more personal and maybe even more probing note continued.

“With the host mentioning that the US press can be worse that in the UK.

“Meghan pulled the narrative back by placing both hands close to her chest to continue about her business that ‘My husband and I built it on our own.’

“But oddly the host became more personal, asking her if she was ‘ok’ and ‘better about mental health’ before coming onto the subject of the current Mail case about the letter to her father.”

“Meghan’s eye-roll and the way her foot began a metronomic ritual looked like a very clear hint to get back to the topic of business ethics that was under discussion.

“She performed some conclusive chopping gestures with her hand but also appeared to touch or fiddle with her wedding ring in a gesture that suggested some understandable discomfort,” Judi explained.

For today’s event, Meghan opted for an elegant look wearing a black short-sleeve cashmere jumper which she combined with wide black trousers.

Meghan accessorised the look with a gold buckle belt and a pair of black stilettos.

The belt is by designer Ferragamo and has a price tag of £438.