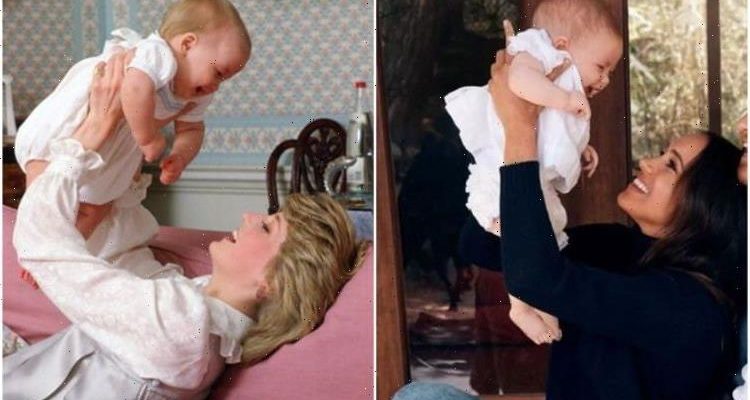 Meghan Markle, 40, Prince Harry, 37, Archie, two and six-month-old Lilibet appeared as a family for the first time in their 2021 Christmas card. The card showed Meghan proudly holding Lilibet, who was born in June, with the tot smiling back joyfully at her mum. The card also showed a rare glimpse of their two-year-old son Archie sitting on Harry’s knee.

The adorable photo was taken by photographer Alexi Lubomirski at their home in California in the summer.

Prince Harry looked on laughing, while Archie, who now has gorgeous red hair like his dad, also had a big smile on his face.

Harry, Meghan and Archie all looked casual in jeans while Lilibet wore a cute white outfit.

On social media some royal fans noticed the photo looked very similar to a picture of Princess Diana holding Prince William as a baby on February 1, 1983.

Meghan and Diana both held their babies in a similar upright position and stared up at their children with loving affection.

Body language expert Judi James spoke exclusively to Express.co.uk about the similarities between Meghan and Diana in their respective family photographs and what Meghan was perhaps trying to say with her Christmas card.

Judi said: “There are such strong echoes from the past in Meghan’s Christmas card pose with daughter Lilibet and it’s not just in the way The Queen’s pet name has been chosen for the baby.

“The body language that Meghan uses with her baby here is an almost direct and perfect copy of a pose adopted by Diana with her own baby many years before.

“Both women define themselves as loving, doting mothers with this pose and both allow their babies to be seen in a playful mood as they laugh and smile down at them.

“Both Meghan and Diana are seen in profile, leaning back to look up at their children as they raise them higher than their own heads but, although Meghan’s head leans back onto the chest of the royal Prince she so clearly loves and is loved by, Diana’s head is sadly supported by a cushion alone in this mother-child pose.

“The joy and delight on both women’s faces is tangible and it is also mirrored by their children’s facial expressions.

“Lifting a child like this creates sensations of excitement that convert to fun when the child looks down and sees the reassuring and loving smile on its mother’s face.

“It focuses the child’s attention on the mother and mutual, echoed smiles and laughter like this are often the result.”

This was the fourth card Meghan and Harry have released since tying the knot in 2018.

The couple used the American phrase ‘Happy Holidays’ rather than the British ‘Merry Christmas’ in their 2021 Christmas card.

This ties in with it being the third time the Duke and Duchess of Sussex have spent the festive period outside of the UK.

In 2019 the couple spent Christmas with Meghan’s mother, Doria Ragland in Los Angeles.

Then in 2020, Meghan, Harry and Archie spent their first Christmas as non-working royals in America in their new home in Montecito.

Princess Diana’s photo of her holding Prince William in 1983 was taken in Kensington Palace.

At the time, Prince William would have been eight months old.